This morning, Chris & I were at a lovely church – Dios es Fiel (God is Faithful). It wasn’t one that rang any bells with me from the past, nor in that barrio (district), La Nuevo Base. We arrived to be greeted by the Pastor, Jaime, whom I recognised straight away: he was a member of a church I preached in a good few years ago, Communidad de Fe y Esperanza (Community of Faith & Hope). It was a ‘prophetic’ day that day, as I’d spoken about the Spirit of God being poured out like a waterfall… there were 4 services in the church that day – 0800, 1000, 1200, and 1600. In the short break between services three and four, it began to rain. I’ve never seen rain like it anywhere, not even in India in the monsoon. About 30 minutes into the service, the roof collapsed under the weight of the water. Thousands of gallons flooded the church, people rushing everywhere to get rid of it, especially on the platform, with all the sound gear and instruments… Jaime heard God’s call that day, knew he should become a pastor, and has been one now for about 7 years. Today was my first time in his church: and it was wonderful.

I think everyone prayed for was healed, with the exception of Johan, the translator! – Chris logged all the details, but he’s fast asleep again now! One lady – the first for prayer – Gladys – had chronic spinal arthritis, and arthritis in many other joints. She was in a lot of pain. Rather than me tell you, she’ll tell you herself (apologies for the sun behind her, but you can see enough!):

Spondylitis was healed, migraines, bronchial and pulmonary problems were healed, the pastor’s mum, sisters, cousins….all healed. Again, I’ll need to get from Chris the details when he’s less jet-lagged! This lovely young man, Brian, was healed of migraines (he had one, but came to church to be healed): 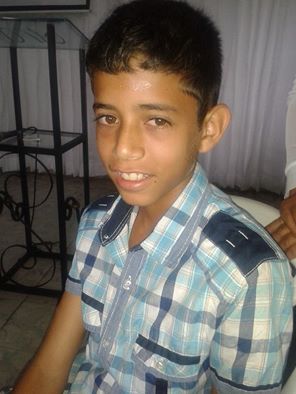 A lovely man with an unusual name – I think it is Deusdario – a Pastor to Street kids and a passion for them that shone from his face, had real sight issues in his left eye(20$ vision, if I recall), and 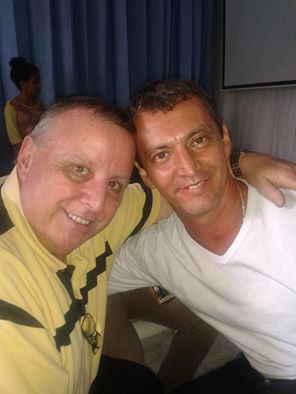 suffered migraines, was healed – that’s him to the left, with moi!

In the afternoon, at 5 pm – 1700 – we went to a church I hadn’t been to for 6 years – a day of real re-connections! God really blessed the meeting there then, and  got the Pastor to relay one or two of the healings on video. His name is Alcides, for the life of me I can’t remember the church’s name, but it might be on the video! When he began the meeting, he told of eight cancer sufferers being healed, a man with AIDS, and someone coming back to life from the dead – that TOTALLY gob-smacked me, a real shock, and utterly unknown to me…. I DO remember a hubbub going on at the back, which I joined with and prayed for someone flat on the floor, with no idea that they might just be dead. Does that count as number 2 in the ‘raising the dead’ list, if I didn’t know they were dead??!! Here is Pastor Alcides with just a little about 6 years ago:

Tonight, just about everyone was healed – again, much to my delight, many arthritics, which to me means that my ‘knee healing’ must be getting closer and closer! Chris had preached excellently again, and beloved Wilmar had – by default – ended up as translator… he puts down his English so often, but he was brilliant tonight. I really will get the list from Chris tomorrow – but one young man, Gerardo, gave his life to Jesus: he’s in a wheelchair, as, on Christmas day, he was shot 16 times, and one of the bullets damaged his spine. God obviously has his hand on him, as 16 bullets would generally, I reckon, find something that would terminate you… and, for the first time since then, got out of hi wheelchair under his own ‘steam’ – not pulled, pushed, or tipped! – no, he didn’t walk out of the building, but he did get up two or thee times, each easier than the previous time, and I look forward to hearing how he gets out of bed in the morning. People who’d had real trouble walking (empathy, I think, is having a great impact on the way I pray for people!) all walked away, pain free. Breathing issues were healed: more migraines: chest pain: one lady with great pain in her breast (no, we didn’t lay hands there!) had the pain go instantly. Another, awaiting surgery on her very painful womb, was healed instantly….

A brilliant, wonderful day… some free time tomorrow after a few long meetings this weekend, and Chris and I can get our heads together on the testimonies….. just seen one of Chris’s posts on his Cali Colombia 2015 facebook page – some of this morning’s healings:

« Miracles at the start…. onwards and upwards from here!
More testimonies of healing and miracles »