Wonderful way to finish off this incredible trip to Cali, Colombia, with a movely family meeting at the Reconocer Christian Drug Rehabilitation Centre. It truly is a marvellous place: the boss, Enrique Leal, has become as dear a friend as is possible, a wonderful, Godly man, whose track record at rehabilitating addicts is second to none. The whole house (huge – formerly owned by the Rodriguez brothers, heads of the Cali Cartel) has an incredible atmonsphere of peace. It was here in November where Thanney and I got to be with one of the young residents, Pedro, 14 years old, a solvent/cracl coacaine for 3 years, then. Totally destroyed his family, parents at their wits’ end, and a sister, Sarah, 11, born with deformed feet and hips. Thanney took the praying on: and Pedro changed from a young ‘thug’ with hard, cruel eyes, to a weeping young ma, asking his parents’ forgiveness – family re-united, then Thanney prayed for Sarah, and her feet and ankles – previously splayed at 90°, so that when she stood (and only with help) her feet were in a 180° straight line – were ‘unhooked’ by God, and turned around…. one, which has been a good 2½ inches (4 cms) shorter than the other, instantly ‘equalised’… 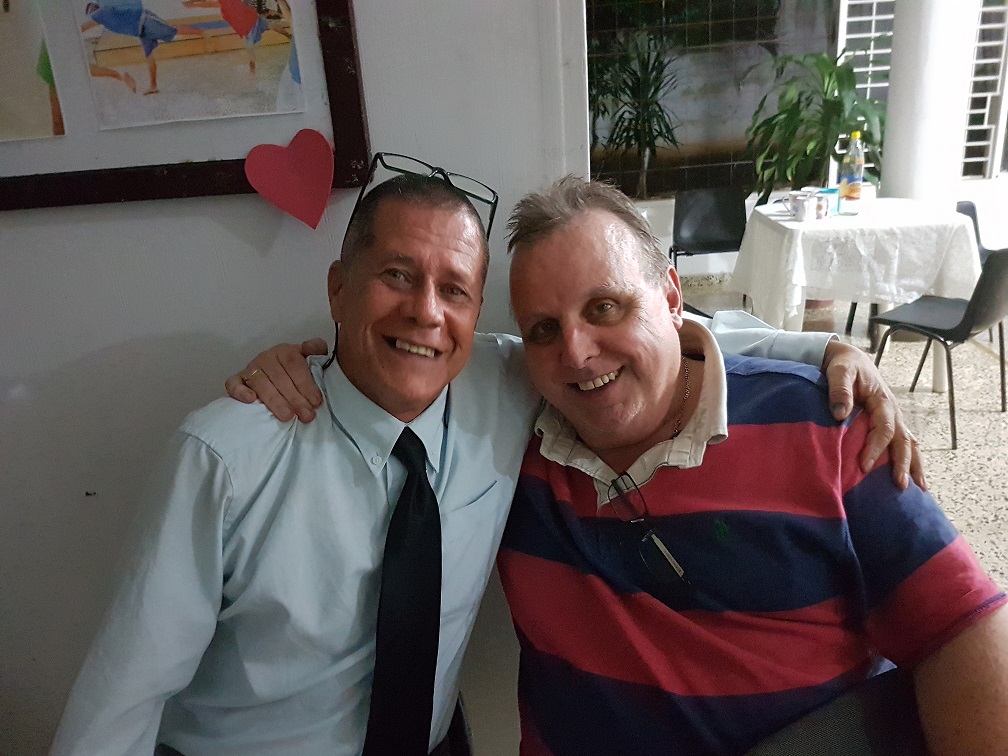 Today, the whole family were there: Pedro playing keyboards in the worship band, Sarah running around in pretty, trendy shoes – unaided – with perfectly straight feet… Thanney was able to chat with them, on video, and hear the story from each. I won’t post it here yet, as I want him to choose if he posts it first, but believe me, it’s wonderful…. 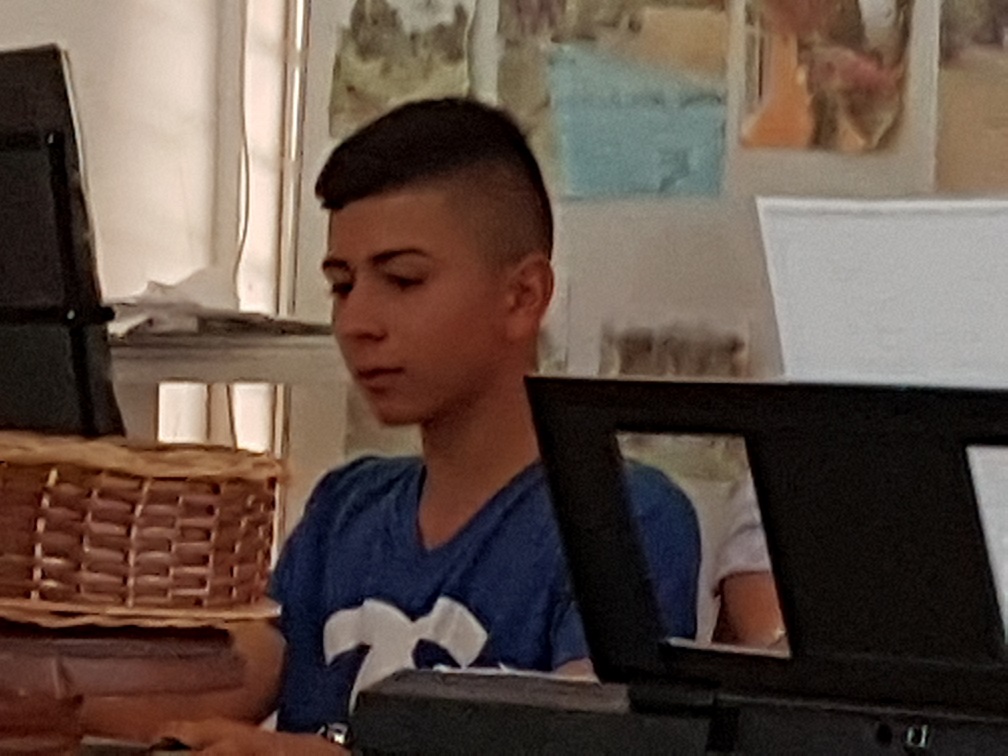 Pedro playing keyboards in the worship band at Reconocer

I got chatting with a great guy named David (it’s pronounced ‘Davvid’ here) – a 4 month long resident at Reconocer: you’d never believe to look to look at him ,talk with him, that just 2 months ago, he was the most difficult, disruptive guy in the house. Enrique has worked miracles with him… got to pray with him and his dad, Jaime, who is due in for prostate surgery tomorrow. Praying that doesn’t happen…. :). Dacid got ‘green shirted’ today, but with a shirt a good couple of sizes too small (!) – but he was so chuffed it was wonderful to see. He was deported from the USA 7 years ago, because of drug incarceration, and as a result he hasn”t seen his daughter, Maylene, for 7 years: she’s 13 now. Please pray for him, that, in the the 3 year he has left before he can reapply to go to back to the States, God will keep him, protect him, and _ United States (dreadful) immigration service, will approve his application to be able to go back and see her, and care for her. 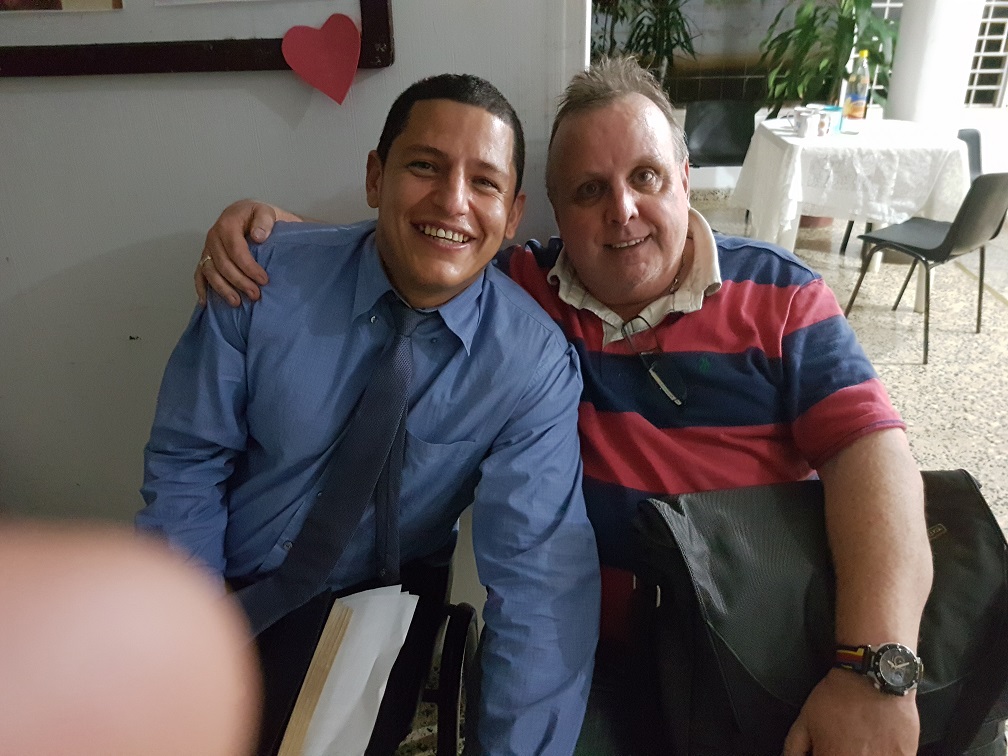 David, such a delight to be with

There’s a lovely ‘ceremony’ for the guys who complete a period of time, trouble free, hassle free:  Steven, a young man who, when he was taken in to Reconocer, was in such a bad way, he couldn’t walk, as rigor mortis had already set in in his feet and legs. He’s a story of triumph, grace, mercy, love, patience, and care. When he arrived, the other guys in the house had to sleep outside, as the smell of his rotting flesh was overpowering. To see him now, on his knees, worshipping and crying to God, is immensely moving. And to see him walking, normally, integrated with the other residents, is such a blessing….the ceremony is that they get given a special green ‘logoed’ polo shirt, which, to them, is precious, as it means they’re on their way out of the pit…. 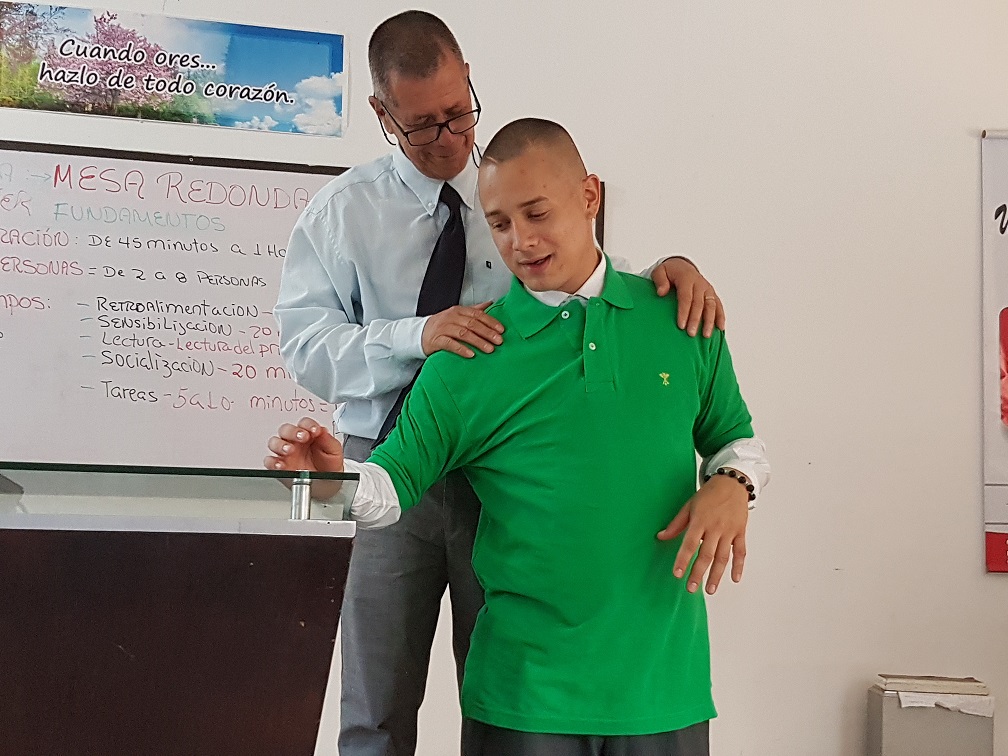 Stephen, a triumph story if ever there was one

Thanney and I both spoke a bit this afternoon. The response was wonderful. Davvid and Jaime were blown away, and – it seems – for the first time in Jaime’s life – he responded to a Christian message in a way he’d never done before: he was ‘persuaded’ in a way that he’d never heard… he found Jesus this afternoon….