I have a ‘principle’ that I’ll pray for people in wheelchairs early on in any ministry time. It wasn’t always that way: many years ago, I’d leave them to the end, perhaps hoping that they’d go home because they couldn’t wait or had got bored (!), or that everyone else in the church had gone, and they wouldn’t see the person leave in their wheelchair, knowing that I’d ‘failed’…..God really challenged me on that one, admonished me for my lack of faith, and I knew I had to change….which I did, even if I was terrified of the failure affecting the rest of the ministry time.

Some of you will have heard me tell the testimony of  Jose Luis, in Sweden: a stroke victim of 2½ years. There were three men in wheelchairs at the front of the meeting, I was with my friend from England, Heidi. I determined that I’d go to one particular guy first: taking the Swedish translator with me, I asked him his name, and what did he want God to do for him – I didn’t really need to ask what was wrong, he had pretty evident stroke characteristics.

When he told me his name, Jose Luis, I spoke to him in Spanish, saying it was a Latino name. 2½ years wheelchair-bound, not able to walk. It turned out he was from Cali, Colombia: 46 years old – God was very good to me! I’d been going to Cali for 11-12 years by then and seen many miracles there, and the faith expectation of many Colombians. I asked him where he was from: South America. Which country? A dangerous one that foreigners wouldn’t go to(!). I replied that applied to many South American countries! I mentioned Colombia. Yes, I’m from Colombia. Which part? I was there 4 weeks ago…. The south-west. Which city? A very dangerous city that foreigners don’t go to. I mentioned a few names, including Cali. Yes, I’m from Cali. Told him I was there 4 weeks earlier. He was amazed. Which part of Cali? A very dangerous part that foreigners wouldn’t go to. I told him that applied to quite a lot of the city (then!). When he discovered I’d stayed on the next street to where he’d grown up, you could see his faith increasing – he was astonished. 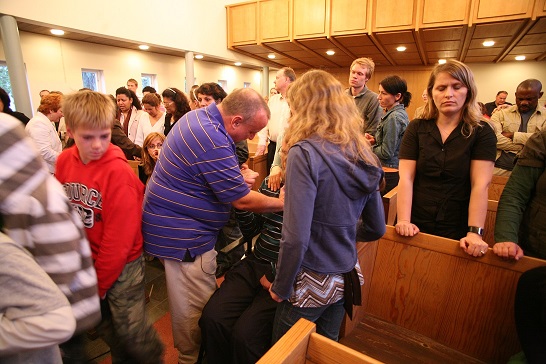 What do you want God to do for you? I want to play football with my sons again, go walking in the woods in mid-summer, and skiing in the winter. I laughed and said that from a country where the temperature rarely – or never – drops below about 20°C, to want to ski was a miracle in itself! He laughed – and I just suggested that he get out of his wheelchair. Didn’t pray….I felt that his faith had risen to a good place. After a few minutes, (seemed like an 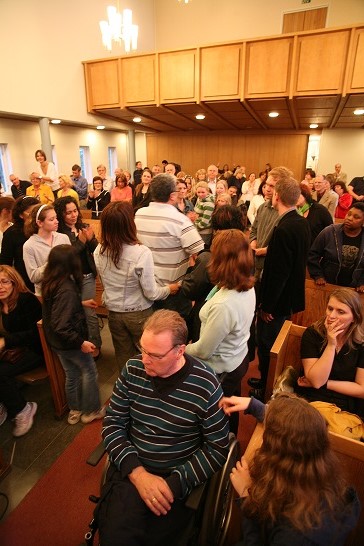 Jose Luis waiting for a miracle….

eternity), he moved his paralysed arm, put it on the arm of his wheelchair together with his good arm on the other side, and slowly got out of his chair, under his own steam. I can’t stand seeing people being pulled or pushed out of wheelchairs, or held up when it’s clear they’re not ready to do it alone…

When Jose went, he left his wheelchair, lonely, empty, at the front of the church….. 🙂

Jose Luis got up – took his first tentative steps, and then, just with the support of his family, walked out of the church. A few months later, I was back at the same church. I arrived as the worship was underway, and as I walked down the church, recognised from behind Jose Luis, standing, with his arms raised, worshipping God….

The next man – I think his name was Tony – also a stroke victim – had been waiting patiently as I’d been with Jose. Chatted to him for a few minutes, and then asked him what he wanted God to do for him. He’d been the same length of time in his wheelchair as Jose, paralysed, like Jose, down the left-hand side. His response was great: ‘I want what he’s just had!’, so I just told him to get up….. which he did, and he, too, walked out of the church. (More below the pictures of Jose!) 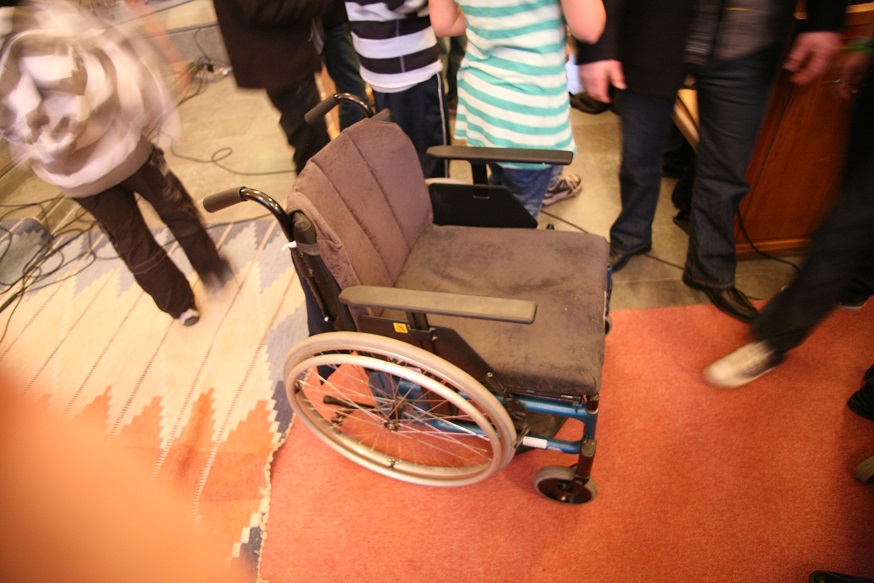 Almost the equivalent of the empty tomb….! Jose’s empty wheelchair….. 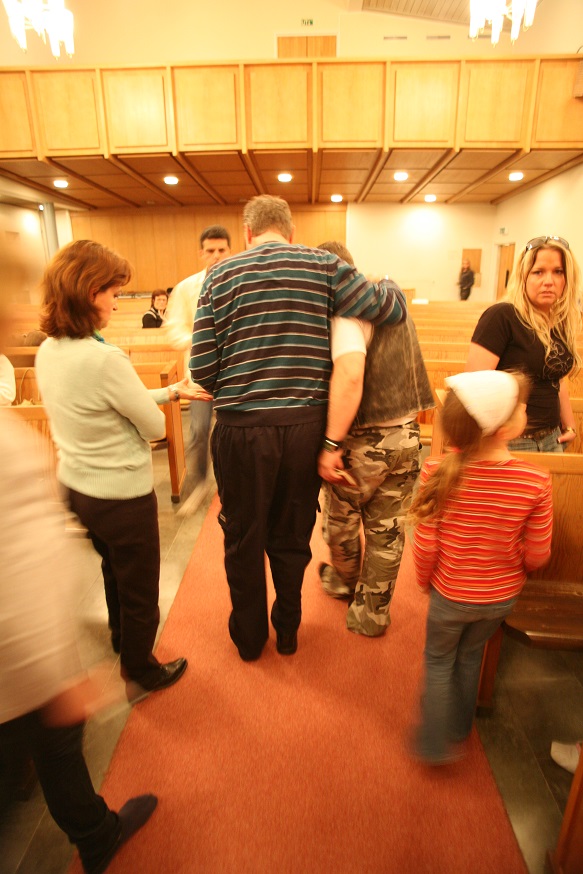 When I got to the third man (I won’t say his name), I said, ‘Well, it must be getting easy for you now after seeing what God’s done for those two men!’. He was the youngest, two young children, another stroke victim, and 2 years or so paralysed. His response totally and utterly floored me. ‘What will happen to my benefits if I get healed?’ I told him he’d almost certainly lose them, but he could have his life back, be a husband to his wife, a dad to his kids, earn for another 25-30 years, and LIVE again. Please don’t pray for me, he said…. so I didn’t.

It’s interesting, as someone who prays for the sick. Two out of three were blessed with amazing miracles by God. One went home in his wheelchair. I know for a fact that in those sort of situations that people say ‘Well, he (me) failed with the third one’…. nope. It’s not often like that. You’d be amazed how many people, who come for prayer, don’t WANT to be healed. Why do they come for prayer? Who knows…. it could be peer pressure, they need sympathy, empathy, want to be seen to want to be healed. But if you don’t want to be healed, the likelihood of receiving your healing is pretty negligible….. It’s something that people who pray regularly for the sick have to ‘live’ with – people believing you’ve ‘failed’ when, like this man, he had no desire to be healed if it’d cost him his benefits….. I suppose he could tell people he’d responded for prayer, but that the minister failed: I can’t imagine he’d tell his family he chose to stay on benefits! 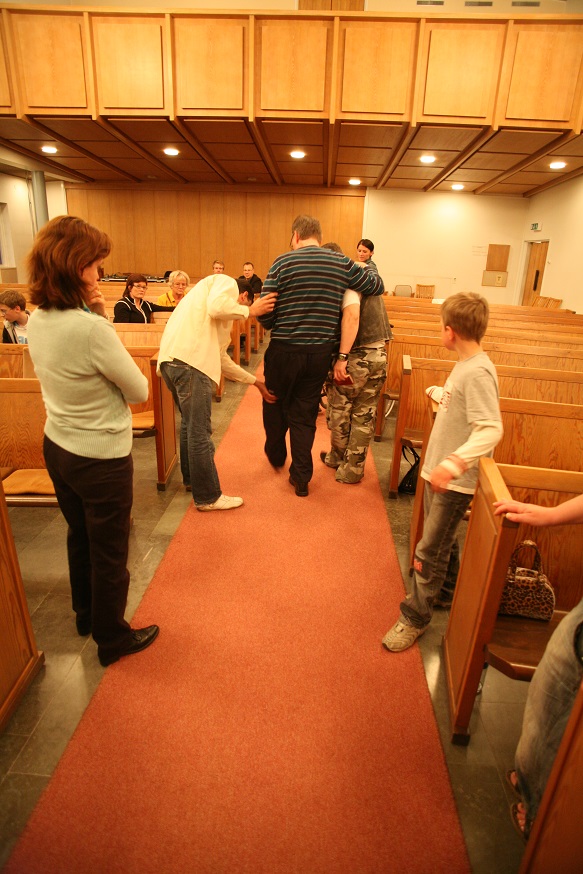 On the way home….