Last Sunday, two lovely churches – ‘Agua de Viva’  (Water of Life) – in Siloe, one of the toughest and most dangerous ‘barrios’ in Cali, led by the wonderful Angela Mondragon de Osorio and her husband Jesus de Osorio: a new venue for church in the heart of a tough district, ideal people to love the people of Siloe into the Kingdom. My only concern was four flights of stairs with this knee, the victim of my dry ski run down my stairs 7 weeks ago, but I made it up and down, though I did feel a bit like the Grand old Duke of York – halfway up and halfway down, I wasn’t sure I was going to make the rest of the stairs in either direction! It’s a delightful church, sensitively and lovingly led, lovely worship… Davy and Thanney both shared well, with personal and miracle testimonies,  I had opportunity to share some thoughts from parts of Romans 8, and then the healing floodgates opened….

It’s fair to say, I think, that most people prayed for were healed, or began – significantly – the process of healing. A lot of pain disappeared from many parts of people’s bodies: many will only be known after next visits to doctors, scans, x-rays etc., but there were a lot who got up and walked like they’ve not walked for months, even years: one gorgeous little girl, Stefania, aged 5, born with her spine in two sections, not joined, and having had failed surgery to try and connect it. Then the surgeons had tried to connect it with a steel ‘triangle’ which stuck out of her back like a camel’s hump…. I felt movement in the lump as I prayed for her, and praying so much since that it is the beginning of a massive creative miracle of a new supernaturally inserted spine.

Another young lady, 12 years old, her name escapes me, but she was born with microcephaly, where the baby is born with a too-small brain. She was a real handful for her mum to hold, but prayer brought a lot of peace into her, and a much more responsive young lady went away from the prayer time…. praying that the brain – and the skull – expand in these days since, and into the future…. 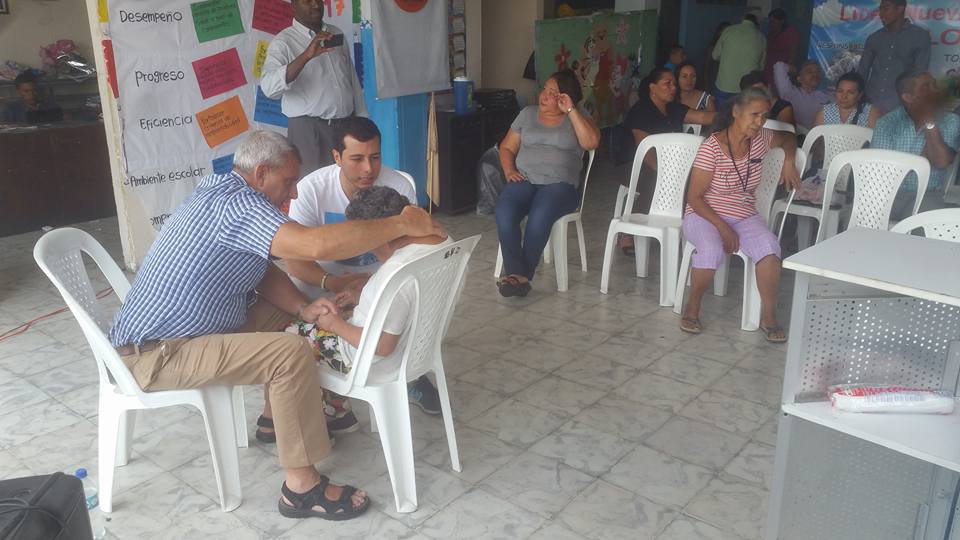 Davy, doubtless soon to be ‘leg-measuring’, and seeing another person healed, just behind him ,Stefania and her mum, with me 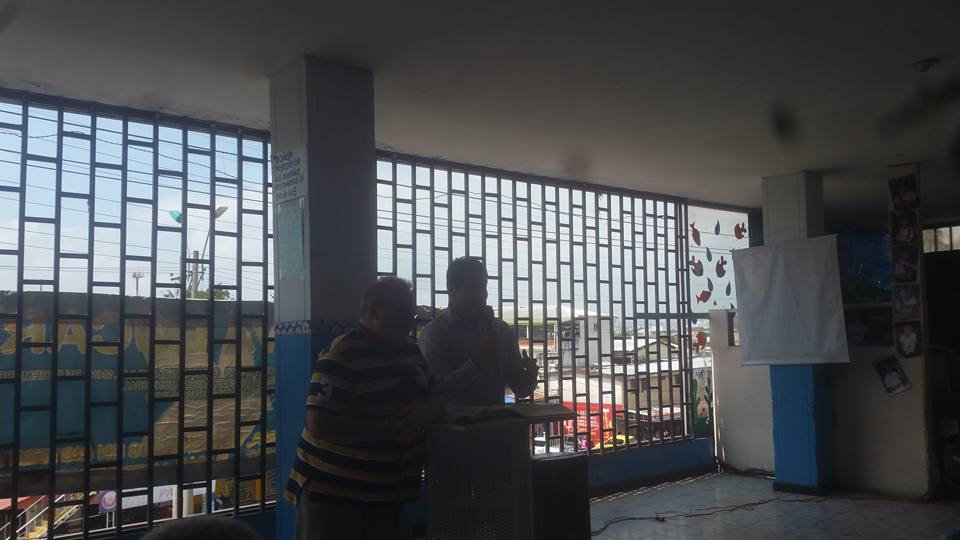 Agua de Viva – I look much better in very low-light 😉

Davy saw most of his ‘patients’ healed, as did Thanney – much to his delight, he got a number of small children, which he really has a passion for – and a lovely ability with. It was a great morning, even the stairs couldn’t detract from the presence of God!! It did take me a while to get down them, though….!!

Sunday afternoon was in the high mountain village, La Sirena, in a church that has become very special – Fe y Esperanza – Faith and Hope: their ‘motto’ is ‘Today is the day of your miracle’. It’s a church where wonderful miracles have occurred in the 9 years I’ve been going there (though there was a 5-year gap, as I forgot the name of the village, the church, and the pastor!). Nine years ago, a young man dying with AIDS – 21 years old, three days or so to live, in a wheelchair, was miraculously healed, it was five years before I found out he’d been healed….! That night in 2008, I will honestly admit I didn’t really know WHAT to pray for him, apart from the obvious, against the spirit of death, the curse of AIDS – so I mostly spent 20 minutes hugging him, as no-one had hugged him for a long time because of the disease. I heard my mum whisper from 11,000 kilometres away that I’d catch it (!!) but I can truthfully say I’m not in faith to CATCH what I pray for, I’m in faith to see it go… he’s alive and well, and one day soon, I’d love to see him again! And I’ve told the story before about a lady in the back room of the church (which is Pastor Alcides & his wife Leidi de Valentierra’s home, a small room, bursting at the seams for church, and with a volume that might well fill Wembley Arena!) who I thought was in a coma, lying on a door that people had removed from their house to carry her up the mountain…. many people at this church walk 10-12 kilometres to go to church, maybe that’s why ‘today is the day of their miracle’….

The lady stayed comatose after prayer – and it was, again, 5 years, before I heard the outcome – she wasn’t in a coma, she was dead: and some minutes after I’d left the church, she came back from the dead, and the meeting I discovered that jaw-dropping piece of information from Alcides, she wasn’t able to be at, as she was staying with her sister in Bogota…. not in a coffin or a jar on the mantle-piece, but alive and well, and sad to have missed being there as she wanted to thank me – though of course, I did nothing but pray, and God blew me away with the end result….

Many were healed last Sunday: after a great time of worship from a vocal group – Salmistas Fe (Psalmistas Faith) – another lovely ‘God-connection’ with them, Nelson and Anibal – the presence of God was tangible, and with the three great translators who’ve been with us a lot of the last week – Cesar, Santiago, and Daniel, we saw God do so much. I’ve had a lot of ministry times with Santiago translating, and got him praying for people to be healed: it’s been great to see God use him to do other than translate! A late night home, even though the meeting was supposed to finish at 9 pm, as people had so far to walk home, on unmade roads in the pitch dark… no one seemed to want to go, and we prayed for most of the people there. Again, all manner of illnesses, diseases, infirmities went, lots of tears and laughter as pain and sickness made a rapid exit out of the building. Alcides has offered an ‘ever-open’ door for every time I’m in Cali, alone or with a team… its such a privilege to have pastors offer their pulpits and churches to this odd little gringo….. 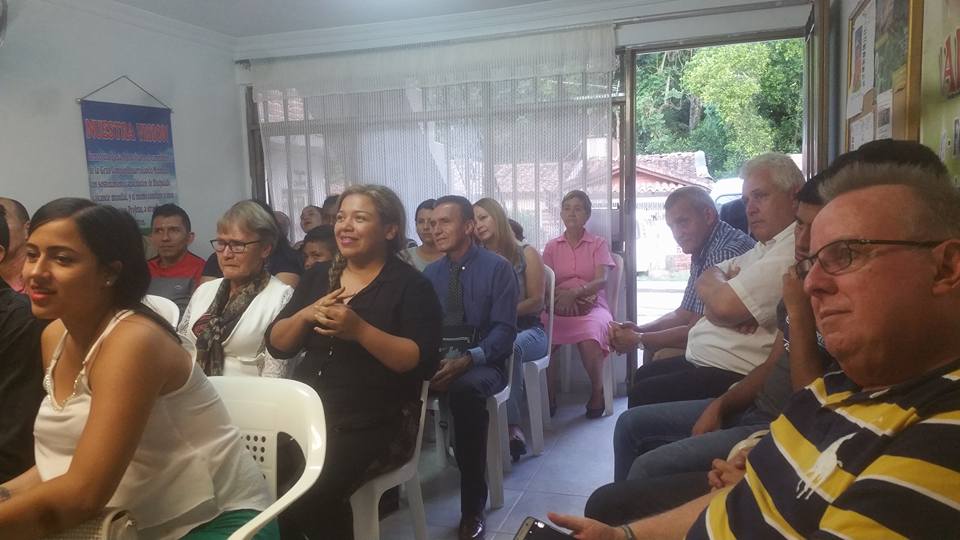 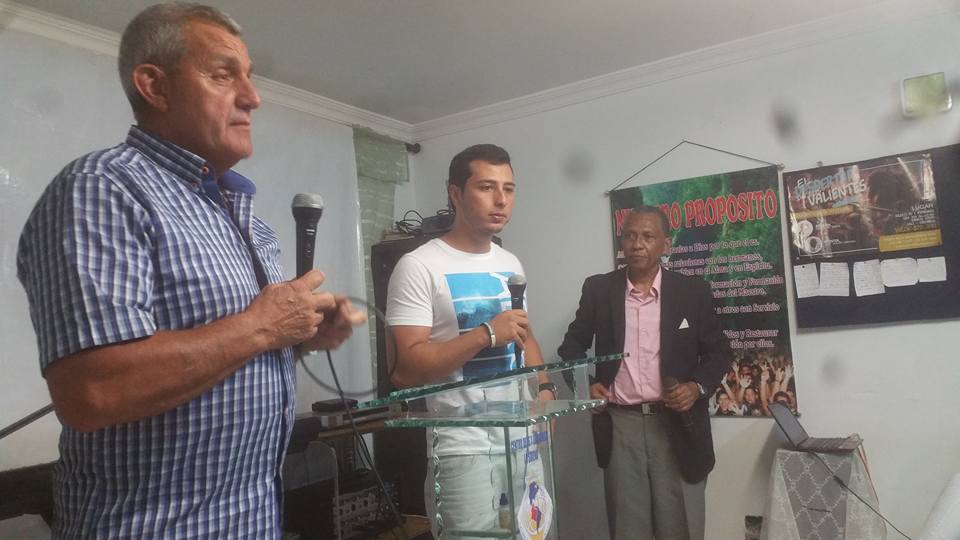