A great weekend began the already-‘blogged’ Ulster Fry healthy nutritious breakfast, shared with the Gomez family, was a day of getting odd jobs done, and dear Cathy, going back to England tonight, was making sure that all us young men were organised with our laundry…. what a blessing she’s been! Later on, we had a terrific evening with Wilmar, Marlene, and Sara, going to their local – very good – pizza restaurant, Pizzamania, then back to their house for a few hours chilling out. It was needed, as Thanney and Johnny were physically exhausted, Cathy hadn’t been well, of course, and I was still trying to get my knees to come into line with God’s promises, as well as tying up the ends of all the meetings, what people had shared, bringing it all as a word to whatever church we’d been in, and – of course – praying for people. 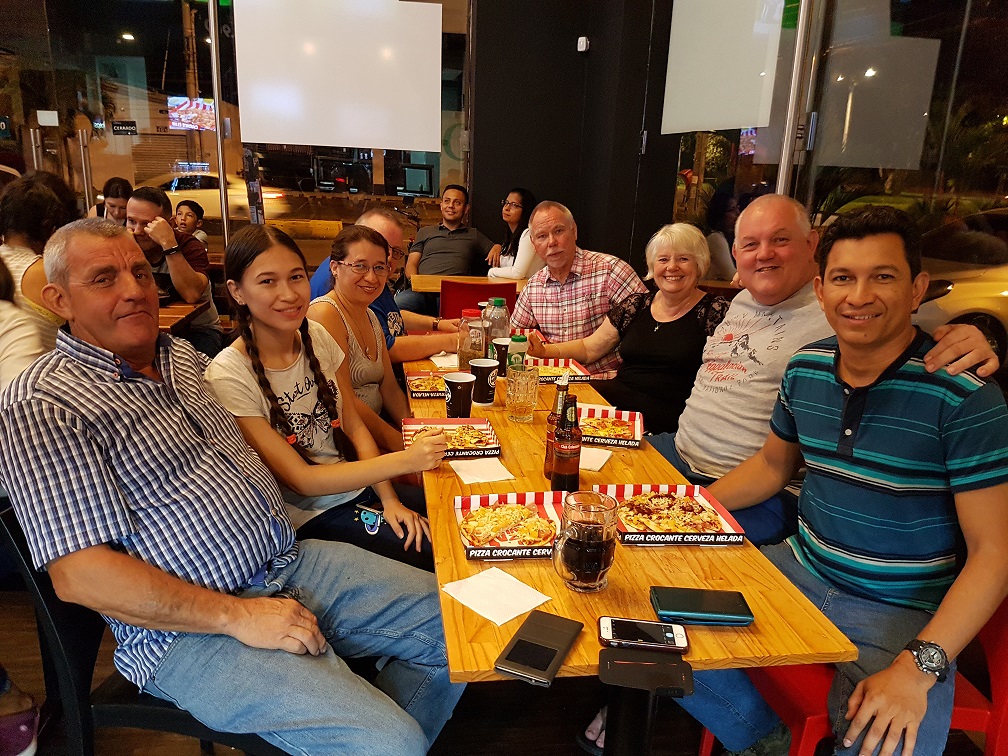 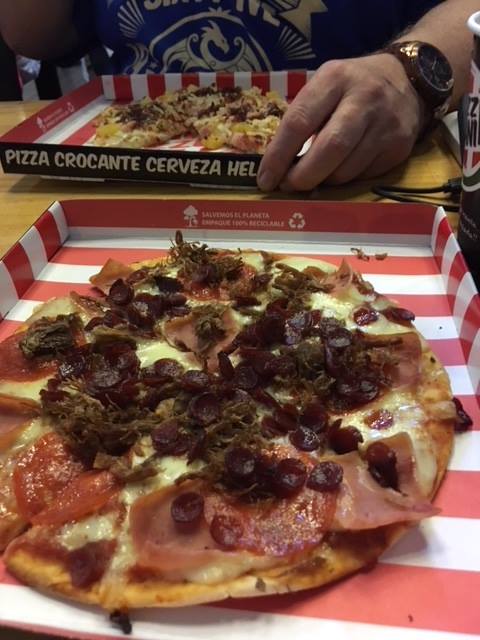 Sundays are often the least restful day for people in ministry – even if there appears to be a gap between meetings, that gap is invariably filled up with praying for people (not a complaint – an honour), as ‘evening’ meetings often start at 5 p.m. there’s lunch to be had – sustenance is vital as praying for people for an extended time is totally exhausting! – and by the time you’ve negotiated people and Cali traffic, AND eaten lunch, it’s time to brave the traffic again to get to the church….

…..but Sundays are invariably wonderful, and yesterday was no exception. In the morning, at Wilmar & Marlene’s church, Mision El Abrigo, they have some wonderful musicians: not a huge church numerically, but about 4 different worship bands they can call on, and all of them worshippers – much more important than being good musicians, but when the two go together, it’s tremndous. It was a really meeting, the worship was inspirational, uplifting, and in awe of God. Each of the guys spoke really well again, some of the people even understood Dennis’s sense of humour…. ;).

It genuinely has been a lovely blessing to see how what each of the team have shared, in every situation, has tied in with what the others have been given by God. The was no collusion, it ‘just happened’…. Yesterday morning, the church all got around US – to pray for us, as it was in MAI, in March, where my knees were healed for 3 months following prayer from them, until the stairs decided to give way under me at home! Praying for Thanney’s hand, Johnny’s prolapsed disc and sciatic nerve pain, for Dennis and Cathy more just for blessing and re-filling, as they head home, and for me. It was lovely: so many affirming words. Then we prayed for a number of people of each, and again, rather than a long list of who had what and what went, suffice to say that many were released from pain, a lady with a ‘floating’ meniscus (it shouldn’t float!) in her knee, with a lot of pain, had all her pain go…. Having had 3 months pain-free walking March to June, I’m in great faith that God – having showed me that he wants to do it then – is doing it again.

In the afternoon, we were at a church in a very dangerous barrio – La Sirena – a church I’ve been to a good number of times now, and where – the pastor mentioned it again last night – miracles always happen when I take a team there – and the scene, actually, of two of the most amazing miracles I’ve ever been involved in in the 40 years of ministry…. the church is small, but that has never presented me with any problems – I’m not in this life for big churches, I’m in it for those who will never have foreign visitors to preach, maybe because they’re small, or desperately poor, or in a dangerous place. I sometimes try to imagine, sitting in the living room (that’s where we were last night) of the very tiny house (smaller than last time – they’ve moved, with a view to saving money in order to build their own church), with a massive sound system (!) and people packed in floor to ceiling (almost), some of the real ‘big gun, big name’ speakers of the preaching/healing world being there. I can’t! The house last night is on the side of the mountain, the hill to it probably being a ‘50%’ (1 in 2 in my understanding!), with – wait for it – speed bumps (sleeping policemen) so steep that cars  rock on top of them…. I thought of preachers in ‘white suits and wigs’ going to a place where the taxi driver said to me, when I told him where we wanted to go, ‘La Sirena? Siloe – that La Sirena? You know that’s very dangerous’…. and I have to say I didn’t see any preacher who’d appear on tv or charge a fortune even considering it…. The church used to be called ‘Today is the day of your miracle’ – it’s now Centro de Fe and Esperanza (Centre of Faith and Hope).

BUT- 10 years ago, when I first went there, there were 200 in the other house: everyone was healed… including a young man, 22 years old, with – perhaps – 2/3 days to live, with full blown AIDS. I didn’t know how to pray for him, at least not without ‘platitudes’ or pity, so I just hugged him, for about 15 minutes. I swear I heard my mum whisper from 7,000 miles away ‘What ARE you doing? He’s got AIDS! You’ll catch it!’ – I don’t know about you, but I’m not in faith to CATCH what I’m praying for, I’m there to see it healed. And he was.

AND THEN – in this little church…stupendous! – a lady, in a small room off the main one, lying on a DOOR, looking as though she was deeply sleeping, or comatose, and would I pray for her… of course, which I did, nothing visible or tangible happened then, and, when everyone had been prayed for, we left. I think whoever organised that meetig must have forgotten where it was, as it was 6 years before I went back. Alcides, the pastor, when introducing me, asked where I’d been for those years: and then proceeded to tell me that the young man who’d had AIDS was very disappointed that he couldn’t be there that night to say thank you – his boss wouldn’t let him have time off of work. And the lady in the back room was equally sad she couldn’t be there – she was with her sister in Bogota…. I asked if she was the one in the coma? ‘She wasn’t in a coma: she was DEAD….’ he said…. even now, 4 years later, sitting here writing this, I just feel the absolute awe of the Lord washing all over me, tears where they were very much that night 6 years ago….. 21 years before, I’d met two ex-dead ladies in Guanzhou, China, and said to God, ‘Lord, I have to see this happen. I don’t care what it costs me, what I have to do, where I have to go: I want to do what Jesus did, and KNOW the raw power of the Holy Spirit honouring the promise of Jesus to us, his disciples’ as Paul promised in 2 Corinthians 1:20… I’d prayed for 11 dead people in those 21 years, and they’d all stayed dead…but in my spirit, faith was doing the opposite of what should naturally have happened – disappointment, failure, sadness…. my faith grew each time I prayed, and when Alcides announced that night what had happened, I was a wrecked mass of tears of joy and gratitude….

Last night, a lovely young man, about 22 (again!), I think his name is Juan: born deaf and dumb. He could lip read, so through the translator, I told him stories of similar people who’d heard and spoken, not necessarily ‘on the spot’ – though there have been those – and by the time we left, noises coming from his mouth were significant, and I’m praying that today he’ll have woken up hearing and speaking….

And people wonder why I love doing what I do…. wonder why I’m happy to live without charging fees (how much could a church like THIS give to cover the cover the cost of this trip? Nothing! In fact, Thanney, Johnny, and I gave them a gift towards their new building), living without a salary…. it’s funny, but in 5 and a half weeks, I’m 65 years old – PENSION TIME! Yippee! Or not…. my bank pension (from 1971-79) will be about £20 a month: because I’ve been on a low income, I was ‘released’ from paying tax and NI in 1991 (‘Mr Bennison doesn’t have a job, he has a hobby’, so my then accountant heard from the Inland Revenue!!). So I’m not too excited about my state pension to help me too much….

BUT ….would I swap what I’ve done for 40 years – with a long career and a big pension (and doubtless now, a fully paid off mortgage as a retired bank manager) for that career?

« HEIN’S FEET ON HIGH PLACES :) – TESTIMONIES FROM THURSDAY AND FRIDAY
PROMINENCE OR SIGNIFICANCE? What do you want? A brief story of Ken McGreavy… »