Spent about 90 minutes at the hospital, during which time we prayed for a large number of kids, and their worried, concerned parents/grandparents. It’s always wonderful there to see visibly God touching the lives of the kids, and more especially the parents, and just the fact that ‘gringoes’ (all foreigners are gringoes here!) take the time, touble, and effort, to go and pray is actually part of the process for the kids and parents. 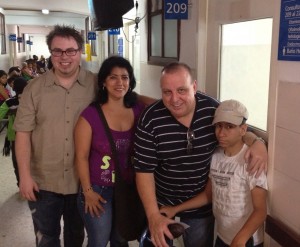 Duvan Abadia & his mum with Lee and me

One stand-out story today: a young lad, we estimated about 10, named Duvan Abadia Garcia, was massively touched by God, looked transformed, so did his mum. Duvan had obviously had some major birth trauma, amongst his ‘problems’ (and this is where I’m glad there are doctors with me!!) were: Myelomeningo cele (spina bifida), tetralogy of fallot (heart surgery for conenital heart problem), neuropathic bladder, taliper equinovarus (club foot, bow legs), and optical atrophy. A fair list, you might say…

Well: the ‘bottom’ end of his body is a work in progress, but after he’d seen my neurosurgeon friend, we’re told he was healed of all, with the club foot and bow legs still to be worked on by God…. absolutely astonishing to see the transformation and hear the news – even more to see mum’s face, smile, and gratitude to God.

We also prayed for a small baby with exactly the same problem as baby Jose Luis had, 18 months ago: with mum, quite astonishingly, sitting in exactly the same chair in the waiting room as dad Jose Luis had sat in when we prayed over baby J-L’s x-rays all those months ago. I told her in my best Spanish what had happened then, and hope and delight spread over her face… we await further news!

Two churches tonight: one in Barrio Cordoba, with a pastor who was in last night’s meeting, and the other in an Assemblies of God church in the north west of the city. Benny, bless him, will come to that one, where Katie and I will be going, straight from the airport after his trek from Mexico City….