That was a comment made to me by a wonderful Ghanaian friend, John Quansah, many years ago. When I first stared travelling, Ghana, much to my ‘horror’ when I received the invitation, was one of my first destinations. I’d graciously told God, in response to prophetic words that I’d travel to ‘the four corners of the earth’, that I’d go anywhere – EXCEPT Africa and India…. fear was the key! The unknown, food, and so much more! Of course, you do know about food in India, don’t you? You don’t buy it, you just rent it for 30 minutes…

African time keeping for a – then – very English bloke travelling abroad AS an Englishman, drove me crazy. After a year or so of tearing my hair out (I still live with the legacy of the baldness!), I asked God for his help, to deliver me of my Englishness, my metronomic clock-related lifestyle, if I was going to travel for more than a year. That was 26, coming up 27 years ago… John Quansah was one of the few Ghanaians who had a concept of time. Many others stated times purely to give gits like me hope (and subsequently many other African nationals – and Latinos, too!). ‘In Africa, we have time. In the west, you have watches!’ was his response to my question on how HE coped, as a relatively good time keeper, in a culture of timelessness.

I discovered pretty much the same across many nations – India, many Latino nations… having just returned home from a ‘manyana, manyana’ (tomorrow, tomorrow, later, later) country, I know that for the past 26 years, God has answered my prayer that I’d adapt – but sometimes, when it really does mess up a church meeting by being inordinately late, or when things are cancelled (and you discover 2 hours AFTER you should have been somewhere that it is cancelled!), my Englishness resurfaces, as it then is more to do with honouring people as much as being punctual. I vividly recall an ‘incandescent’ pastor (no names mentioned!), last year, furious that I’d been ‘delivered’ to his church 3 hours and 20 minutes late: during which time the congregation had sung, and sung, and sung…. I do believe that, because of what God did in that meeting, I retrieved the rage from being murderous! – and managed to keep my reputation with the pastor intact….

In that respect, I’m so, so thrilled to have met a Pastor in Cali, 18/24 months ago, who understands both time and honour. From my next visit to Cali, he’ll be organising my itinerary: Pastor William Castaño Barón, who has become a very dear friend, has a huge amount of respect across a number of Latino nations. He’s a theology Doctor, and is truly one of the most humble, gentle, most ‘smiling’ people I know. Whenever William has said a time for a meeting, or when he’ll pick me up – he’s been there. Along with 17 year-long friends Pastors Wilmar Gomez and Hendrik Hoere, William will look after me and my ‘team’. I’m so very grateful for all who’ve organised me, and for me, in the past: and look forward to what will be my 50th (Golden Jubilee??!!) visit to Cali later in the year. Watch, look out! I’ll be looking at you….

Truthfully, I always feel an obligation to the people who go with me as part of my team, that some ‘wasted’ hours might be ok, but when it comes to MANY wasted hours, I’d never want them to feel they’d wasted their money going with me. Fortunately, I’ve not had that reaction from anyone: maybe because I’m careful to ensure it doesn’t happen! Chris, who’s just been with me, wrote this in a Facebook message when he got home: ‘Thanks for a brilliant two weeks!’ – that’s what I want everyone’s reaction to be who goes anywhere with me! 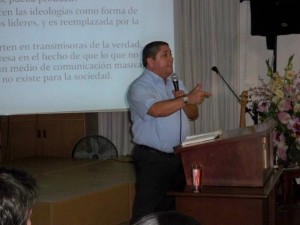 I’m so grateful to all the people who have organised my programme in Colombia up until now: they’re friends, brothers and sisters in the Lord, and, maybe, just maybe, it’ll be a relief to them NOT to have to organise ‘clock-watching’ westerners in the future! William has already said he can get me and my team back into a hospital that, for one reason or another, had not fetured on my agenda in Cali for a few years – University Hospital (I think it has 4,000+ patients, so we might be some time… 🙂 ), other hospitals, prisons (hopefully we WON’T ‘be some time’ in there, other than a few hours per visit!), and churches…. even since posting the previous draft of this blog, a pastor whom I used to go to regularly to preach at his church, but who had ‘disappeared’ off of my agenda, has invited me back – perhaps because of William’s reputation… please pray I never damage that reputation for him!!!