I’ve learned the HARD way just how different Spanish is between Mexico and Argentina, let alone Spain and Latin America! Even ‘fresas’ (strawberries) aren’t what they are in Argentina (fruitillas), let alone the amazingly ‘broad’ meanings in Spanish of the word for a ‘shell’ (non Spanish speakers, if you’re intrigued, I’ll answer in a private message – ’nuff said!!)….

My ‘coup de grace’ came, not from the differences in Spanish though… a couple of weeks ago, a whole host of Caleno (Cali-ites!) friends came to a barbecue we hosted, including a pastor named Umberto. I first met him about 4 years ago, to pray for a miracle for him: he was dire pain from 2 wrecked hips, which had affected all the bones in his legs (I know that happens ‘cos of my knees, which are doing …ok right now).

Praying in Spanish, which I love to do as it is such a beautiful language, especially for worship and prayer (though everywhere – just wish I knew a few more verbs!), I bizarrely remembered the ‘carreras’ for hips, but couldn’t remember the word for ‘bones’: I asked my translator friend, Diego; ‘huesos’ was his reply,which of course I knew. But in forgetting, it put my off my stride, and as nuevos (new – plural) and huesos are similar words…I commanded, in Jesus’ Name ‘nuevos huevos a ti, tambien’! – ‘new eggs to you, in Jesus’ Name’ – at which point everyone fell about laughing…Umberto whispered to Diego, translator: ‘Tell him my wife will be VERY happy with his prayer!!!’ Bear in mind, too, that the word for testicles is also huevas…. Umberto and his wife were at the barbecue, so all my friends, who’d heard the story, which has been extensive told by me, and others, all over the world, were introduced to him as ‘the man with new eggs’ – getting a big smile from him, and an even bigger smile and a thumbs up from his wife!!!! Life’s never dull…. 🙂 – especially when I’m speaking Spanish!

Until they moved to pastor a church in Bogota, I used to speak regularly at a church led by lovely friends Jhon & Adriana Bermudez. One Sunday, afer the third and final meeting (all three of which has been fantastic), Jhon took me and my translator buddy Fernando, out to get some fried chicken. Adriana hadn’t been in church that Sunday, so I wanted to ask Jhon, ‘Your wife, she’s ok?’. Now, one of the cardinal ‘sins’ of speaking another language, I’m told, is not to think in English. As someone to whom languages do not come easy, and being especially tired are preaching three times, and praying for dozens and dozens, I thought in English… 🙁

Your = Tu: wife = esposa: is = es: ok = buena… ‘Tu esposa es buena, Jhon?’ His shocked expression made me realise I’d blundered, horribly, as Fernando cupped his hand over his mouth and stage-whispered, ‘You can’t SAY that!’ ‘What can I say?’ ‘Tu esposa esta bien’. Ok…. ‘What DID I say?’….. ”Your wife, she’s hot?’ !!!!! AArrgghh…wrong ‘to be’ verb – there are two! Jhon by now was laughing, fortunately, he knew me well and laughed at my Spanish….

Next time, in their church, Adriana – who is blonde & blue eyed, unusual for a Latino, AND beautiful – was there. Jhon introduced to the congregation, 2-300 people, and called Adriana to the front too…. ‘You know and love our friend Paul: he thinks my wife is hot! And she is, isn’t she?’!!!!! I was redder than a glass of Merlot….. 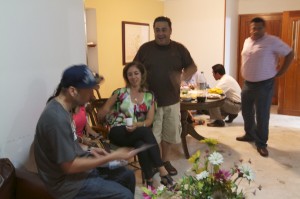 « Titles or testimonies?
Thank you…. »