Many moons ago, beginning in ’87, I spoke on the Youth with a Mission ‘circuit’, having the privilege of going pretty much all over the world to talk to young people on ‘Goals, Drwams, & Visions’ – encouraginging them to believe in the massive God of the Bble, to dream big, to crash through their comfort zones, and believe for huge numbers of salvations, miracles, and healings. I spoke for a number of years in Perth, Western Australia  – one of the best YWAM bases I ever went to. In 2003, I met a young lady – then, Erin Curtin, now Erin Newton, from Seattle, Washington state, United States of America. We reconected just a few weeks ago, after 10 years, through dear old Facebook, and I asked her to tell you her story. Here it is. 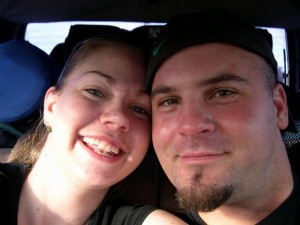 When I was in High School, I ran on the cross country team.  I had been running competitively for only 2 years, and only in track and field, so this was new to me.  Towards the end of the season, I had worked my way onto the varsity girls’ team, and was slowly climbing the ranks.  At one of the last races of the season, I felt my right knee start to have intense pain.  I was benched after that race, and could only ‘run’ on the elliptical machine.  My season was over.  I went to a doctor to try to figure out what was wrong with my knees and was diagnosed with patella tendonitis and lateral insertion of the patella tendons.  Essentially, the muscles around my knee caps were not strong enough to hold the tendons in place, and so they were flexing over the edge of my knee cap when I walked or ran, and would get inflamed.  I lived with the pain in my right knee for three years before I met Paul Bennison.  I was attending a Young Persons Discipleship Training School in Perth, Australia in January 2003 when I met Paul.  At that point, I was struggling to go up and down stairs, and could not walk without significant pain in my knee.  I had discussed with a doctor that when I retuned back to the States, that if there was no improvement, that I may need surgery to correct the problem.  Paul came and spoke about healings and miracles, and was a vessel for the Lord to open my heart to hope for a miracle.  At the end of the week, Paul met one-on-one with each student and gave a word from the Lord.  After my first meeting with him, I felt such a burden to have him pray over me again, and also to pray for my knee.  The second prayer totally unnerved me.  He spoke God’s love into my heart, and then prayed for my knee.  I felt a burning sensation all over my knee, and couldn’t even get out of the chair. The sensation lasted for about 3 minutes, and then slowly faded.  When I was able to stand again, I knew the Lord had healed me.  It’s been 10 years now, and I am still pain free!  Praise the Lord!  Paul Bennison boosted my faith, and inspired me to trust for a miracle.  I now have a burden in my heart to pass along the amazing gift the Lord gave to me to others who struggle with knee problems.  I have seen a handful of healings over the same problem I had in the last 10 years.  I am so grateful to Paul for inspiring such faith!

(I have a lovely video testimony on the day it happened in Oz, with Erin, but aarrgghh, I can’t access the hard drive it is on! I’ll post it as soon as I can!)