So many things about my life cause me to thank God for where I am, who I am, where I’m at. It’s funny (not funny ‘ha ha’ – perhaps ‘strange’) – but pretty frequently I have people say to me, ‘I’d love to do what you do!’. My answer, generally, is, ‘Well, do it then!’. So often, we look at other people, and various emotions, thoughts, ideals etc., run through our minds, like ‘I’d love to do what you do’, ‘I wish I was like him/her’…. What we’re looking at, generally, is the just the surface: I seem to remember Jesus saying something about it – one particular verse is mentioned in three of the four Gospels (John missed the boat on this one!) – but I’ll use Luke 14: 26-33, thinking especially about verse 26 and 27. They’re a tough call, aren’t they?

I saw the picture here on Facebook earlier on, and it started the cogs in my brain whirring….on a day when I’ve heard that just a few of the possessions that I most wanted to come ‘home’ from the United States, have actually arrived on a ship in the UK today. People must sometimes look at me and think I must be wealthy, as I travel – and have travelled – a lot, for the past 26 years (someone once asked me how many miles I’d flown: impossible to work out, but it must be around 3 million!), and the past 34½ years in full-time ministry. Or, perhaps, that I have a rich family who fund some if not all of what I do. My family, as far as I know, is my sister, two cousins, and me: our family reunions could be held, if we held them, in most people’s downstairs loo! With no dad, and a mum who struggled to work through ill health, it’s certainly not a wealthy family!

I grew up in what I guess would be classed a ‘working-class’ family, perhaps in the ‘upper’ half of working class. Dad, who had been a bomber pilot in World War 2 (would I love to have sat and talked with him about that…) worked like a trojan to make ends meet: so hard, in fact, that by 41 years old, he was dead: he’d literally worked himself to death. I was 12 years old. That was a day that will forever be burned into my mind and my life – 30th September, 1965, 5.09 p.m. I’d just got home from school, my third week at Lewes Grammar School for Boys: I’d struggled there, as I’d gone to grammar school a year late, not for educational reasons, but because of my conduct record at my junior school…

….and THAT wasn’t because I was a naughty or a bad boy. I was top of the school, to be honest, pretty much 100% in every subject. It was because I was left handed that I was caned, four times a day (at least), for four-five years (aged 7-11), by (what would now be regarded as) a psychopathic, lunatic headmistress (God bless you, the late Doris Lofts!), who hated me with a passion because of my writing ‘disability’. I passed my 11+ (I can hear loads of people saying ‘What’s that?’! – google/wikipedia it, I’m sure it’s there!), but failed it on my conduct record. So I went to Secondary school for a year. It was then that dad and mum picked up the gauntlet, and fought. Boy, did they fight for me. I was top of the school at Sec: and I got to take, with my Northern Irish friend (a link for me with NI that goes back to 7 years old!) Roger Brankin, from Warrenpoint, a specially created 12+ exam, and so Roger and I arrived, a year late, at Grammar School. The difference in ‘class’ where work, then, was concerned, I’d equate with going to Oxford or Cambridge Universities from Year 8 or 9…. We never really caught up.

So I arrived home, after three very tough initiation weeks, having got a really good result and commendation from my history and English teachers. It was a long journey to school, as we lived in the Lewes council area, which was 20 miles away, even though we only lived 3 miles from Eastbourne. Bizarrely, I had to go into Eastbourne on the bus, to get the train to Lewes, but my friends who did the same journey and I had the exciting experience of regularly sharing the same comparment on the train as Charlie Watts – Rolling Stones drummer: Tommy Cooper: and Barry Bridges, Chelsea and England footballer). I got home just after 5pm every day – and, on the 30th September, just in time to hear my dad dying upstairs.

My mum was amazing: she then worked herself into the ground to raise a (very troubled because of dad’s death) teenage lad, and saw me through to the successful conclusion of my ‘A’ levels (graduation at 18 in the States!). There was no money for University, so I got a job, in a bank, which I hated. Square peg in a round hole comes to mind….

When I’d been in the bank for about 9 years, God came calling. I’d got a lovely subsidised mortgage by then – 2½% – when mortgages were then between 11-13% (imagine that, those with big mortgages now!). Cheap personal loans, and my first son, born in ’78. When God interrupted my comfort zone, it was to quit the bank, mortgage, salary, good pension – the lot! – and work full-time for Youth for Christ – which I’d been doing in my ‘spare’ time for 5 years anyway. No salary, only what I could raise by visiting churches, and from people who appreciated the ministry. Within 2 months of doing that, my car – a wonderful (NOT!) diahorrea-coloured Austin Maxi (whoever designed THAT car??? – changing gear was like tying to stir congealed refrigerated rice pudding with an old bent straw!), blew up, literally, in Hailsham High Street, in East Sussex. I could only do my job WITH a car, so thank you God, thank you very much! A week later, God had my anger reduced to humility: and then answered the problem with the provision of an almost new car, given by another evangelist. Wow….

The story goes on. I won’t bore you with it. But what Jesus said in those verses is repeated, which must make it pretty important. In fact, ‘Whoever 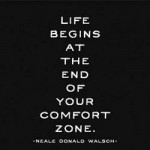 wants to save his life will lose it, but whoever is willing to lose his life for my sake, will find it’, is repeated 5 times in all four gospels. I don’t think anything else Jesus said has that much emphasis given to it by the gospel writers.

So when I saw the ‘step into my shoes’ picture, it made me realise how wonderful, faithful, and gracious God has been, in honouring his promises to meet the need of anyone willing to pay the price for his call. Since Youth for Christ, which I left in 1983, God has asked – insisted, actually – that (then, in ’83) I sell the house, to pay my way through Bible School.

Where I’m at now has cost me pretty much everything: my family, my wife – before you draw conclusions, let me say that there are many precedents whom we consider heroes to whom this happened:  Job, William Carey, C.T. Studd, David Livingstone, to name but a few. And the ‘wife and family bit’ has a whole lot more attached that won’t get written here. I lost my possessions on four occasions (pretty much totally on three of them – what’s arrived in England today is the first time I haven’t lost virtually everything!), my salary, my pension, my home…. I’m so grateful for the support of people, some of whom have known me most of my life, others who’ve known, or seen what I do when I go away, and been with me. My known ‘income’ is about 30% of what I need to live, eat, and go where God opens doors for me.  Still want to do what I do? It is always demanding to follow the call of God: and demands sacrifice. You want to know something? I look back on 34 tumultuous yet amazing years of ministry – and I wouldn’t swap everything it has cost, if it meant losing everything that I see God do, that still, after all these years, leaves me breathless, amazed, tearful, stunned, blessed, and wondering most days why ever he chose me. I’m glad he did.

So… before you want to be someone else, or more importantly, before you criticise someone, or judge (Matt 7:1 is still, for me, the scariest Scripture) – think about stepping into their shoes, walking where they’ve walked. Winston Churchill said many great things – ‘Never give up: NEVER give up: NEVER give up’ being one of them: and ‘When you’re walking through hell, keep walking’…. Stopping there isn’t a pleasant option: and standing still means you’re really going backwards. Once upon a time, I thought it would be wonderful to be a Chinese pastor seeing the revival that has been ongoing in that country for more than 60 years: THEN, I met among many pastors, one – George Chen, who spent 18 years in a Siberian labour camp, massive sub-zero temperatures, for 18 hours a day, 7 days a week, standing up to his neck in human excrement. Step into his shoes…. ooohhh….. or Samuel Lamb, 22 years in a Siberian coal mine, 2,000 feet underground; when he was released, he discovered that his wife and child had been killed while he’d been away….

But it’s always, always worth it….