Last night, quite late, I had quite a long ‘chat’ on here with my great mate, Nick Lugg, who just happened to be on a 7½ hour layover in Nairobi on a flight from Zambia to London. We used to travel quite a bit together some years back, and, in truth, some of the wildest and funniest things happened to us. We nostalgically reminisced as the chat went on… like what should have been a relatively ‘standard’ journey, by bus, from Lusaka to Mufulira, Zambia. Giraffe Tours. That was the name of the bus company: ‘full, air-conditioned buses’ their publicity proclaimed when we booked the day before. They even had an office where you could pre-book. All was well. 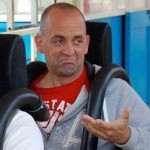 Nick…NOT on Giraffe Tours bus in this picture…!

Or not. We stayed in the (then – 1996) obvious hotel in the city, close to the bus stop: the Lusaka Hotel. Hmm. The only real thing in it’s favour was that it HAD a TV. And there was cricket on the TV, which delighted both of us cricket-fanatics – might even have been England, but the events that followed blurred such delights out of our minds. We had to be at the bus stop, if I recall, about 5 a.m., a mere 8 hour+ journey. Just prior to bedtime, Nick realised that – how shall I say it? – something he’d eaten had turned the contents of his er, waste anatomy, to pure liquid (not the front waste section, that would have been in order)…. boy, had he either eaten a lot, or he was losing organs and bones to fluid, too!

People always laughed at me then – still do – because of the volume of my luggage. It’s after they’ve laughed that THEY realise they need plasters, bandages, toilet paper that isn’t high grade sandpaper, or that dreadful ‘Izal Medicated’ stuff that never wiped, as it was shiny and slippery, just smeared everything everywhere… and my travelling companions suddenly realised that my luggage was actually USEFUL, as I had stuff – mostly for them, I have to say, that they didn’t.

8 hours on a bus the next day, and Nick’s impersonation of the Victoria Falls on a ‘polluted’ River Zambezi day, were not a good partnership. So, diocalm to the rescue. ‘Directions: take one or two, as required’. That was far less than what was required, so Dr Paul gave him 6. It worked. He was locked up tighter than a suspect Swiss-Bank’s dodgy account vault.

« The Living Years
The long and winding….road? »