As Christmas approached, in 1989, the euphoria of the collapse of communism in most of Eastern Europe, was at its peak. Great days for most of those poverty-stricken, desperate people, and their countries. One country remained unmoved by the November jubilation that year: Romania. Under the dictatorship of one of the world’s most evil men in history, Nicolae Caeusescu, he held out for another month. Just after my birthday, December 14, Romanians began to rise up as the rest of their Eastern neighbours had done, and by December 16, the revolution was in full flow, bloody, but thankfully, short. Christmas Day saw the ‘execution’ of Ceausescu and his equally evil wife: conspiracy theorists have their doubts that they were killed, I’m not sure, as someone who still, today, loves (and hates) that beautiful and ugly country.

I often said to people whom I took to certain nations: ‘You’ll either love it or hate it: but even when you love it, you’ll hate it, too’. Romania would be one of those countries. As they are about to gain freedom from EU restrictions concerning freedom of movement within the Union, it’s sobering to realise that Romania and Bulgaria (subject to the same EU entry conditions as Romania), have a population with almost 23% below the poverty line.

As I watched the Romanian revolution unfold, over Christmas 1989, I was inexorably transfixed to the television, watching it with tears pouring down my face. I’d been once: and thought I had no desire to go back again – ever. I sat, watched, and KNEW I had to be there, but with no idea how, why, or what for. Within 5 weeks of the President’s execution, I was there, with a group of people from the then Arun Christian Fellowship, and others from Battle Baptist Church: a convoy of tucks, one 38 tons, 2 17 tons, and 2 or 3 7½ tons trucks, which you could drive on a car licence. It was one of the biggest culture shocks I’d had at that time, firstly to drive in from Austria to Hungary, and see the amazing differences between the two neighbouring countries. The shock was even more profound between Hungary and Romania.

Our convoy took in some of the worst I’ve ever seen: an orphanage in a freezing cold condemned castle, in Tirgu Mures, horses and carts on the road in the darkness with no lights, dvastated mining towns in the mountains in the south west of the country. My own personal memories of the orphanage visits will NEVER leave me: especially one little boy, no name, in a single sized ‘cot’ (cage) with three other very small, malnourished kids, their cot filled with urine and excrement. He was standing – if that’s the right words for a child with no legs, leaning against the side of his cot. He had no arms, either, and where his eyes should have been, there were skin-covered bulges. I asked, through a translator, what his name was: he didn’t have one. How did he come to be like this?: a failed ‘knitting-needle’ abortion attempt by his mother had severed limbs and destroyed his eyes. I asked how often they got picked up and hugged: never. Why would we do that?

I picked him out of the cot, and hugged him, and he laughed as he received his first ever hug. I wept buckets. I so wanted to bring him back to England….

Since that day, early in February 1990, I’ve had the privilege of visiting Romania well over 100 times (126, actually): and I came to love a country that in so many ways was hateful. I still don’t speak the language, though I know a good few words, and today, the lives of the orphans from those days is a feature on the BBC News website (http://www.bbc.co.uk/news/magazine-22987447) – outside of the main cities – some beautiful (Cluj Napoca, Timisoara, Brasov, Sinaia), some ugly (the parts of Bucharest that weren’t ‘cosmetically treated’ in order to gain entry into the EU, Pitesti, Craiova, Petrosani) – but I’ll never, ever, forget the welcome and hospitality in some of the most poverty stricken homes I’ve ever been in, right up on the Russian/Moldovan borders: it was humbling. Towns with glorious names, like Stinca…

I don’t think I’ll EVER be able to stop going there, as long as my legs, heart, and lungs keep going. I have some wonderful friends, and the Beeb article talks of a local man who hasn’t forgotten the kids of ’89 – now, of course, adults in their 20’s. And Denis, a little abandoned baby when I first ‘met’ him, who’d survived for three weeks after his birth, abandoned in a field by a mum who couldn’t afford him, or the abortion that would have prevented his life: in those three weeks, Denis had his nose eaten off by rats, but somehow – God, perhaps? – stayed alive, and when I told his story, it moved people to support his prosthetic surgery – ‘new’ noses at 5, 10, and 15 years old. I’ve not seen him since the first nose was about to fitted, by a lovely plastic surgeon, Dr Dan Enescu, who helped Denis for free…. 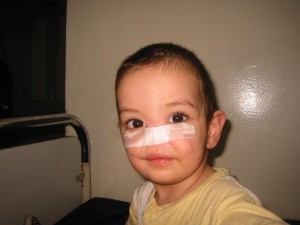 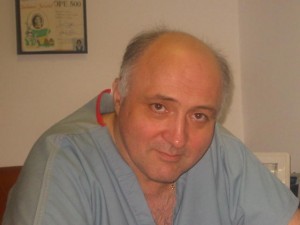 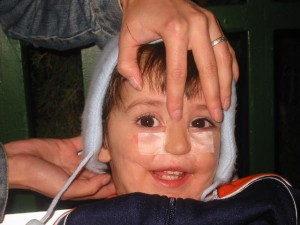 Denis with nose, sort of!

Lots of Brits moan about the Romanians flooding Britain: of course, like everyone who from the UK, I wonder how many more people we can take, but you know, not ALL Romanians are like the mugging gangs, the cashpoint scammers. Some are like Dr Dan, others like my lovely friends Marius and Ileanu Radu, in Timisoara. Maybe all Brits and Norn Ironers (Northern Ireland!!) ought to go and see why they want to escape….

« A bit more from Crawley!
Crawley again…. not so creepy anymore! »