Last night, we were in the church of Pastors Hector Rios and his wife Luz Dary Escobar. A lovely miracle happened while Caroline was reading some Scripture: a lady with very bad eyesight realised that her sight had ‘deteriorated’ further while reading her Bible, so she took off her glasses – and could see perfectly!!! I love it when God just shows every now and again that he doesn’t need us at all, does something like that for the lady: then he chooses to let us back into the game and do the praying!

Unusually in a church here, only a handful of people responded for prayer for healing. Normally it’s pretty much 100%. We ‘split’ into four teams – normally with about 80 people present it’s necessary, so Wilmar & I only prayed for a couple of folk. The first was a lady with a lot of pain down her left side, the beginnings of osteoathritis in her knees. Thank you, Lord, that all her pain went….

….a little bit of irony in that one, as I’d spoken for a short time after Caroline, to encourage people to respond for prayer. Being honest, even in that few minutes, my own knees went ballistic, and for a few moments thought I’d have to get Pete to carry me to my seat! I’m sure God’s sense of humour is in this somewhere, as – not exaggerating, honestly (ask guys that travel with me!) virtually everyone gets their knees healed – if they need them healed! – when I pray for them….

Then we had Alexis, a massively handicapped guy from an accident, I think 9 year ago, when he stepped out from behind a bus into the path of a fast moving car. He was brain damaged, and consequently unable to walk, use his hands, or speak coherently. His wheelchair had been home for those years after many months in a coma, and about a year in hospital. Like Leonardo, the night before, his voice began to get stronger after we started praying for him: and become more coherent. Pretty much a repeat of Leonardo’s story: strength came back to his arms and hands, and then he chose to stand up. The pastor, Hector, told us later that he was inherently lazy, so I don’t know how much progress he’ll make unless he can overcome that, whereas with Leonardo, he is utterly determined to get his lie back.

Tonight, in a church I know and love, Vision y Avivamento (Vision & Revival), it was probably 100% response for the healing invitation. It’s in the barrio, Retiro, one of the most dangerous in Cali, but I’d have to say I’ve never remotely felt threatened there in 2-3 years of going to the church, pastored by a fantastic couple, Jésus Mauricio Naspiran, and his wife, Sandra Torres Guañarita. Mauricio was wonderfully healed when I first visited the church early in 2013: another motorbike crash victim, he’d not only broken his arm, but had shattered his hand. One of his ministries/gifts is leading worship, playing the guitar, and he was devastated that he couldn’t even LIFT the guitar after his ‘recuperation’. A few moments’ prayer sorted that one, and he was miraculously healed: hes led the worship every time I’ve been there, since. 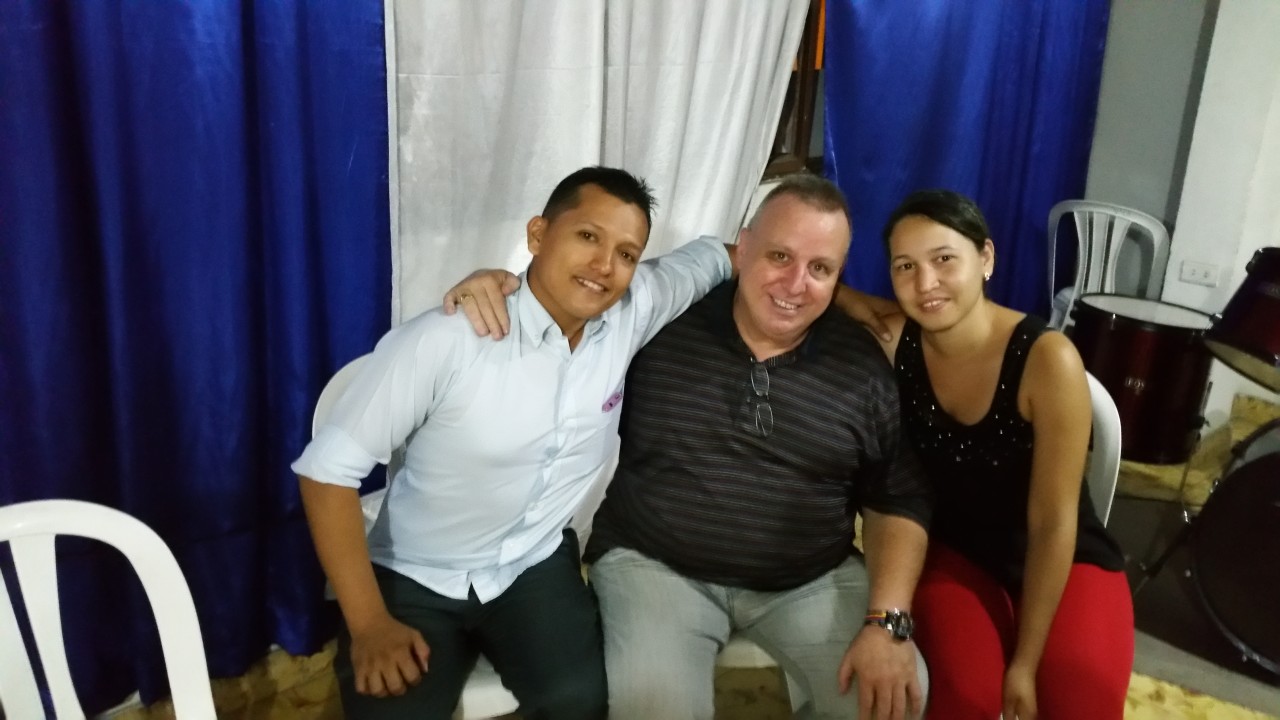 Mauricio and Sandra, pastors of Vison and Revival church

All the team spoke, spoke well, too, telling testimonies of what they’d seen God do, and Caroline spoke really well on the story of Nicodemus. A lady gave her life to the Lord, which is always wonderful.

Johan, translating, and I prayed together, with Pete: everyone who was sick, or in pain, was healed. First up was a lady with diabetes – only the next few days will tell, as always with diabetes, if she’s healed of that: but she had a lot of pain in her…..knee (!!) and feet, which went immediately. As Jesus, in the gospels, never partially healed people, I would say it’s pretty certain her diabetes went, along with the diminished eyesight as a result of the disease.

After two or three more people who wanted prayer for family, or emotional issues, or for prayer for an unborn baby, Joseph came for prayer. I guess about 13-14 years old: with an undiagnosed and accelerating deformity in his feet. Both feet had lumps (doctors said possibly cysts, but inoperable for some reason) on the outside, and the prognosis was that his feet would get worse and worse. He also wore fairly strong-lensed glasses. Pete prayed for his feet: I got him to take his shoes and socks off: the lump on the right foot went down as we watched: Pete prayed again, and the lump on his left foot shrank as well….. thank you, Lord!! As he was about to get up, I asked him if he wanted his eyes healed. I don’t think it had occurred to him! He had degenerative astigmatism: to read even a single word without his glasses, made him very dizzy. Prayer sorted that out, too, and I asked him to take off his glasses, and he read a number of verses from Johan’s Spanish bible with no problem. The glasses promptly went into his pocket…. 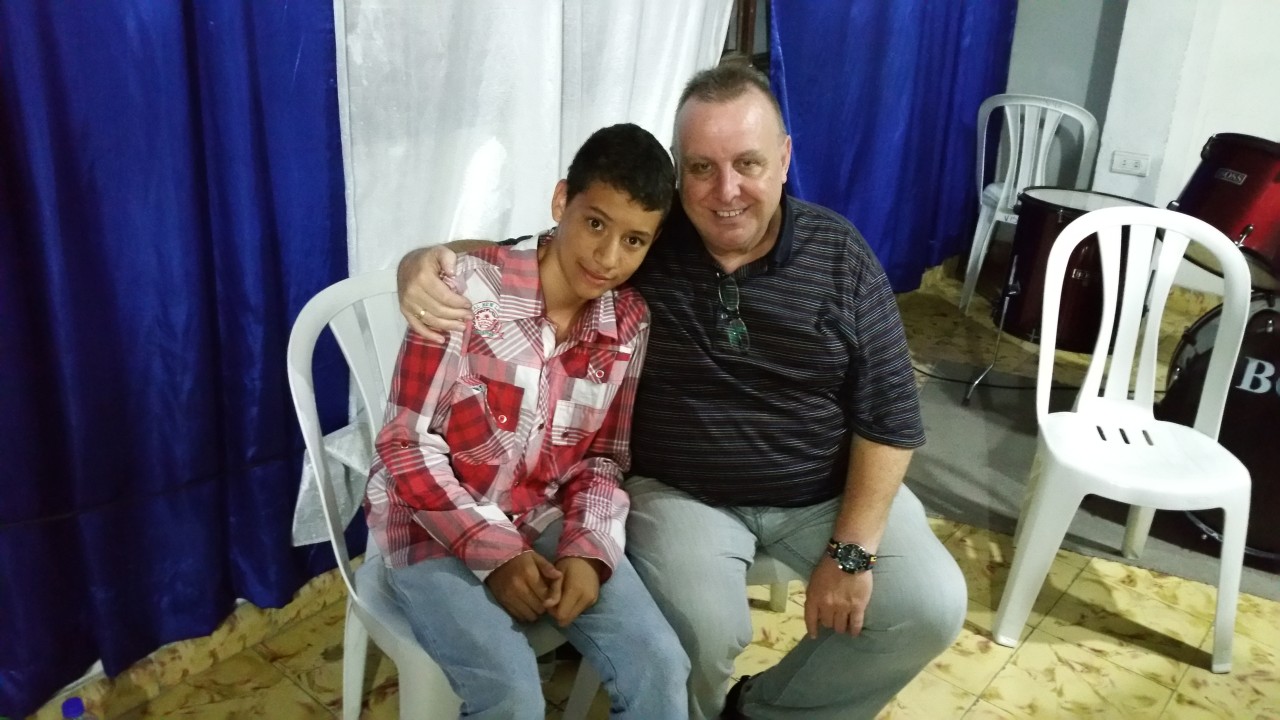 Robert is a man I’ve prayed for three times in the past: first time, he was in a wheelchair, and he no longer needed that… he still had mobility issues caused by problems with his spine, and his legs and feet began to tingle. He walked a few steps unaided for the first time in some years….

Kerry and Caroline both had people healed, but rather than wake them, I’ll get their stories tomorrow!

The spiritual attack? Well, I gather everybody’s money, generally before we leave the UK, for their share of the rent of our apartment, then over some days, because of the limit on daily withdrawals, raid various cash machines and accumulate it. It’s never been a problem before, and the rent has always been paid in full…. but when we got back home this afternoon, I noticed the drawer beside my bed was open, and when I opened it further, most of the pesos had disappeared. They can only have been stolen… 🙁 – just on 4,000,000 pesos, about £1,000/US$1550/AU$2100 – I’m waiting for the guy who checks the CCTV film to let me know tomorrow if anyone ‘unusual’ entered our apartment, then I guess it’s the police.

You’re probably thinking, like I am, that they won’t be able to do anything. I leave next Thursday, and have no means of paying the rent now. The owner is the only other person with a key, but he’s been showing various people around the apartment as he’s hoping to sell it, and there have been tradesmen here concerning the internet, the electrics (we’ve been in darkness 2 or 3 times), and my bedroom door slammed shut with the breeze and locked itself, so a locksmith, too.

Please, if you can, pray that God will do a miracle, and provide what I need to keep the owner happy…. it seems he has no insurance on his rental properties (I only discovered that today), so there’s no recourse there….

« Night of wonders – video of Leonard getting out of his wheelchair….
A new door »