Once, not so long ago, I’d have said I had a myriad close friends: but years, events, situations, death, and many other things, take toll of some of those friendships. People I once walked with and they with me, are no longer there. Some choose to go in another direction. Some fall away – not just from friendship, but even the faith. Others – you realise to your sadness – have ‘used’ you to promote themselves. Others still have been ‘covertly’ undermining you in order to ‘take over’ what you’re doing . Others, still, who’ve listened to rumours, heard one half of a story and never checked out the other half, and without warning, walk out of your life on the basis of a lie. I’ve had a number of them, in each category, sadly. Faithful are the wounds of TRUE friends, who help – often with hard-hitting words – point out where things went wrong (and in all the ‘failed’ friendships, I’ve failed, too).

I’ve been privileged, over the years, to take with me to foreign countries, especially Colombia, some of those I call good, true, close friends: men with whom I’d share pretty much anything going on my life, bad and good.

But there are the faithful friends. Through thick and thin, hell and high water, rocks and hard places, those who’ll stand in front of you to take what comes when the **** hits the fan. I’m so grateful that I have more than a few of those friends, a good number here in lovely Cali. It’s always a joy to go to Mision Abrigo Internacional: a curch planted many years ago by European missionaries, Hein and Teija Hoere (Dutch and Finnish). They’ve been here 30 years now, and since my first arrival in Cali, they’ve become closer and closer friends. Hein (Hendrik) was my first translator here: he was brilliant, and I felt honoured and humbled that such a committed and visionary man – with Teija equally committed and visionary – should translate for little old me. Since then, and occasionally staying in their home in the early Cali days for me, I love and respect them not only as apostles, preachers, and leaders, but as friends. 18/19 years on, we get on so well, and they’re an intrinsic part of my feeling that this wonderful city is genuinely my second (pushing for first?) home.

Their church is testimony to their leadership, apostolic gifting, and the release of others into ministry. Hein and Teija still live in Cali, but spend a good part of the year planting churches in Bolivia. Two men lead the church now: Jhon Jairo Gonzalez, and a man I consider one of my very dearest friends in the world, Wilmar Gomez. These two lovely men are a testimony to real apostolic/pastoral ministry – trained, given responsibility early, then released into ministry. Wilmar is a man I would use as an illustration if  preached on Matthew 0:26 – ‘If you want to be great in God’s Kingdom, learn to be the servant of all’.

The worship at Mision Abrigo is wonderful: you don’t even have to know Spanish to get totally caught up in it. They have so many people who are worshippers and worship leaders, they rotate the musicians and yet it is as good every Sunday as it was the previous one. 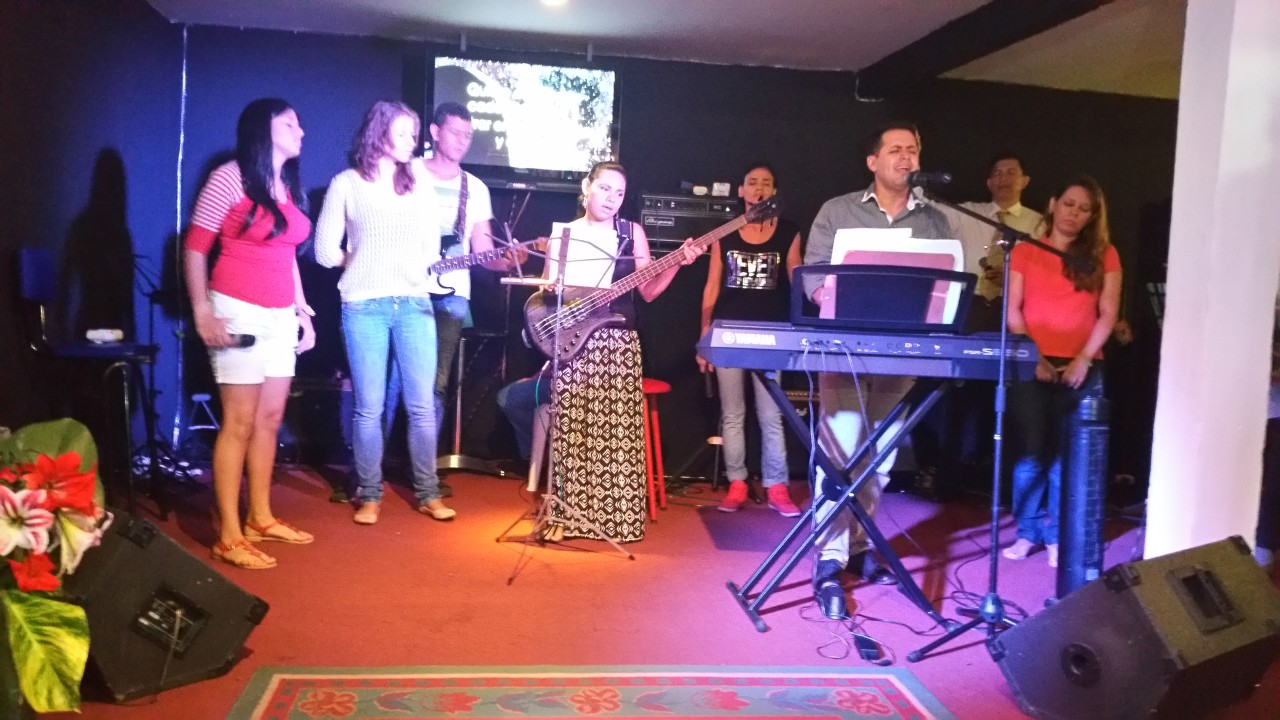 At their church, God did some wonderful things: all of us saw most, if not all, we prayed for, healed. I got knees first up (!!) – osteoarthritis – instantly gone. Spinal pain, hearing deficiencies, kidney disease, gastritis – one lady with chronic gastritis pain testified to the Pastors and then in church last Sunday that it wet instantly. God’s good….

I didn’t know until last week that Cristian, the drummer – I thought I’d got him in this photo but sadly not – had had such a damaged arm some time back, that there was never any chance of him playing the drums again. In fact, if I recall (put me right, MAI guys!) that he might have lost his arm at the time. Cristian is ‘drum crazy’ – he lives for his drums, and it was such an answer to prayer for him when he was given a drum kit…a even greater answer to prayer was that, following his injury, I’d had the opportunity to pray for him (I’d forgotten, I hate to admit) when his arm was totally healed… his drumming has got louder and better ever since!

« Living under that open heaven…and seeing the Glory
A BIT OF A CATCH UP – to say the least! (Don’t faint!) »