Literally. a couple of days into the renovation of the street kids centre, Thanney began to remove the old toilet (a poilte word for it!). In doing so, he discovered that, when the house was originally built, the ‘builder’ had failed to put the plastic soil pipe in place (cost about 70p here): so for goodness knows how many years, the waste from the loo has been filling up the foundations, swirling around smellfully, eating away at the sub-floor (the earth floor below the concrete), widening the rather large hole it had created….

The walls had a half-inch gap above the door height, where the floor had dropped, and the floor had a big dip in the middle… that could just have been poor building – Thanney’s been somewhat bemused by the building regulations (not!) here…. What Ana Bustos, the wonderful lady who runs this ministry, as well as other ministries, as well as 100 hours a week as an eye surgeon in hospital – wanted, was more stuff put in, like toilets, windows, kitchen, bathroom, etc., all more weight – and the walls were already on the verge of collapsing (it’s a 22 feet plus high building, so big walls!). If they’d collapsed with 140 kids and maybe 20 workers inside, they’d have mostly been killed…. so, Thanney effectively has saved the lives of a lot of kids, adults, and maybe the visionary, driving force that IS Ana Bustos.

For a while, Thanney felt he’d failed, in that he knew he wasn’t going to be able to leave behind a gleaming new interior. Far, far, far from that, he’s made sure – now – as best he can with the way Colombians build (often using wood for supporting beams rather than steel) – that the house will stay standing, as safe as he can make it, by shoring up the floor and walls with huge beams and some things I’d never heard of and can’t remember the name of! A vital job, well done, by Thanney, with support from Davy, Andrew, and Adrian – who, as well as doing what they were told by Thanney, between them, ended up praying for healing for many neighbours, passers-by, and leading a considerable number to Jesus…..

A church that I love going to here – Dios con Nosotros (God with Us) – was our first church meeting of this week: it’s down in the south of the city, pastored by a man who 20+ years ago was Director of Security for the second biggest drugs cartel in the country – maybe the world (Pablo Escobar’s was the biggest ever – true fact: the Medellin cartel which was Escobar’s, spent US$2500 a month on rubber bands to keep the money tidy….). It’s a great church, a good crowd for Wednesday evening always: I got Adrian to preach again – I love to preach here, but I don’t bring people with me to sit and listen to me, I’ve preached in lots of the churches many times, too – and I get to pray with people, and the majority – if not all – get healed.  I keep asking the guys to write down their prayer miracle stories: I haven’t had one from any of them yet….. 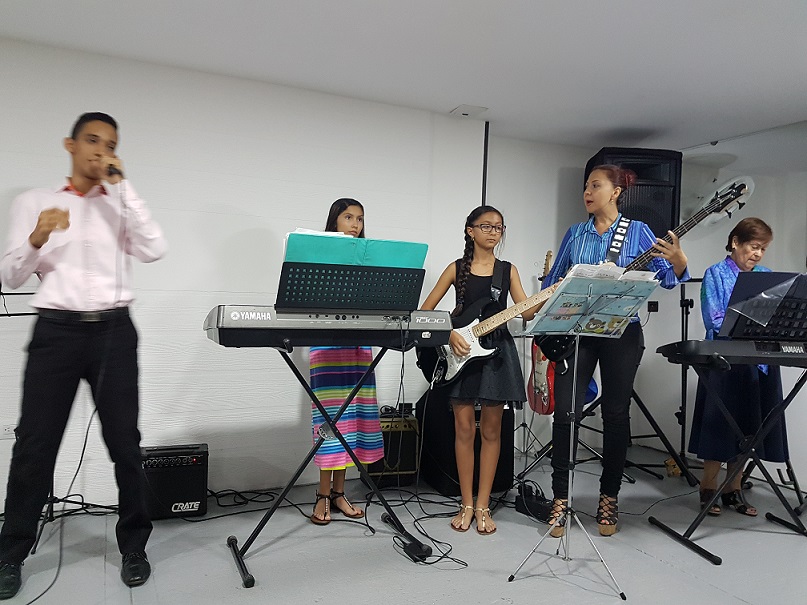 on Wednesday, the first man I prayed for, name now somewhere in the ether, had terrible pain in his spine, huge retriction in movement, doctors couldn’t diagnose the problem, so he was just on pain killers, was healed instantly – in his spine. The pain moved to his appendix region: prayed: pain went. Then to his pancreas area – healed, straight away. The enemy is a right so and so, shifting the pain around! It went, his face ‘uncreased’ as the pain went – thank you, Lord.

A lady with acute pain in her left knee and lower leg – the end product of diabetes – was healed instantly. A young lady with gastritis-type pain in her stomach and abdomen had the pain go immediately for the first time in weeks. A young man – married – with back pain (though I think that was a cover for his real problem, which, at first, he was maybe too embarrassed or ashamed to ask for prayer for ), had the pain go: that clearly gave him confidence to ask for his second problem: I can’t tell you if this one was healed, though God never half heals anyone, so I’m pretty certain it is! – preature ejaculation. It was causing terrible stress between him and his wife, as it was – indeed – very quick: less than a minute. Perhaps In April I’ll see him again, and ask him: watch this space!

All the guys had the maority healed, if not all – at least the ones who could give an instant answer. Adrian also had someone saved, and as he’d preached on Zaccheus, he challenged the middle-of-the-road ‘tree-climbers’ to get down from the tree, and get their Christian lives in gear. Quite a few did, which was very exciting.

Tonight, in a few minutes in fact, a new church to me – ‘Casa de Adoracion: Iglesia Fuego de lo Alto’ (House of Worship: Church Fire on High – I’ve said it  many times, but the church names are inspirational both to going to church, and expecting something to happen – ‘**** Baptist’, ‘****Presbyterian’, ‘****Gospel Hall’ doesn’t ‘do it’ like ‘God with Us’ or tonight’s church, or my favourite, ‘Today is the Day of your Miracle’). Expecting much….

And for tomorrow, too: a wonderful church, one of my favourites, ‘Casa de Oracion Rey Jesus’ – House of Prayer: King Jesus’. Always healings and miracles there, including one lady healed of 7 different cancers over the years I’ve been going there!

Just now – before we go – one of Ana Bustos’s helpers, Jean (as in French John!), came here to ascertain what Thanney says needs doing now in the house, as my boys have finished there today. Having done that, the guys all chatted to him about the Lord, and Adrian led him to Jesus….

I thought you’d like to read Thanney’s Facebook post yesterday: originally, he was coming to build: over the months we’ve talked about the whole picture of Cali, he’s wanted to see miracles…. having felt early in the year that it wasn’t his ‘gift’ necessarily !!) – here it is:

« The ‘house’ that Thanney (and the team!) built…well, will make a zillion times nicer!
Fire from on High – and there was….. a bullet in the throat….neck…. multiple bullet holes in a body…. »