Ater probably 17 years since seeing Wilson Acevedo Pulido and Daniela Stelea, it was so good to be with them in a church I had no idea they planted and pastor a church – Iglesia Misionera Estableciendo Su Reino (Missionary Church Establishing His Kingdom) – in Cali! The last time I think I saw them was on the island Boca Chica (it means small mouth! – yes, really!!), off the Colombian coast from Cartagena, in the Caribbean. Idyllic in some ways, hard work in many more poverty stricken (then – guess it still is). It was made famous by having part of ‘Romancing the Stone’ filmed there (with Michael Douglas and Kathleen Turner). 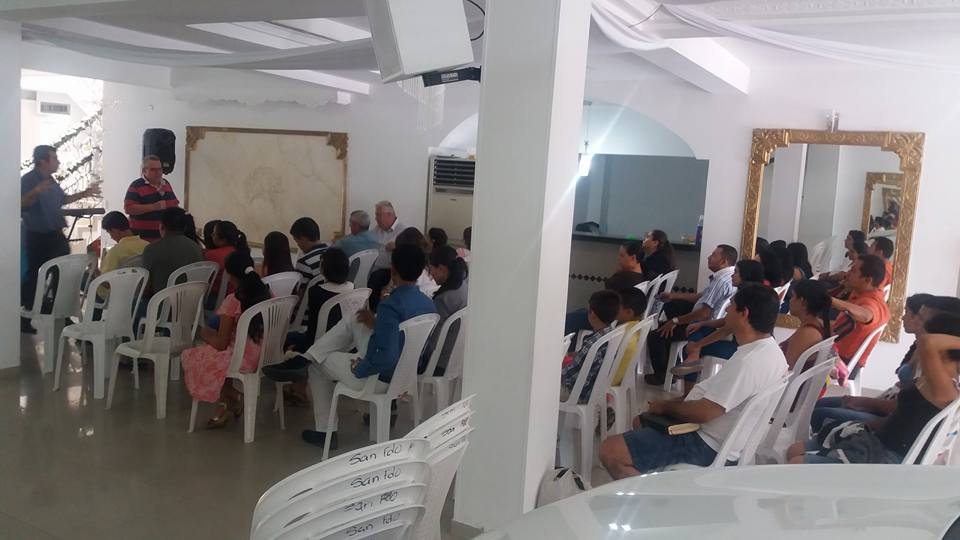 Seven years ago, they moved to Cali, to establish work with kids in a troubled town just south of Cali, Hormiguero. They have a fabulous work there, teaching the kids everything from English to sewing to the Bible. When I met Daniela first time, it was a bit of a shock, finding a Romanian on a Colombian island! – I’d been going to Romania for some years then, and it was high on my list of countries I love – maybe just below Colombia! Perhaps it’s because their flags are the same colours, though different design – so bright and outstanding. It was a great meeting, and God was there big-time to heal and transform and deliver. Wilson & Daniela have a big vision, coming into being, to establish many Christian schools in this region, and nationally in Colombia…. fancy a visit, Graham Coyle???? 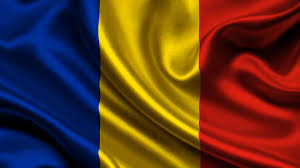 Davy shared well – Wilson only had one or two ‘accent’ needs for me to ‘translate into English so he could translate into Spanish!! – 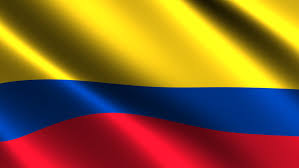 and set the tone for Thanney to share well again.  Wilson’s a great translator, so easy to be alongside, I’ll forgive him for Texan English! 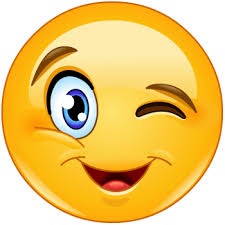 The meeting, which I guess normally ends after an hour and half or so, lasted 3½ hours (!) – so many people to pray for afterward, so many people set free and healed. A young lad Thanney prayed for, had constant seizures, and told him of a ‘blackness’ that consumed him when the seizure arrived. Thanney knew it sounded demonic, he tried to get the lad to look him in the eyes, but he wouldn’t/ couldn’t, which confirmed the demonic presence. After about 15 minutes, he did look at Thanney, was prayed for, and knew he was free…. Thanney and Davy had a few oppressed/ possessed people: all went away free. I had all physical problems – one lady with extensive arm, shoulder, and knee pain (yeah, I know!!) was healed instantly – her face was an absolute picture! A lady with back and spinal pain had the pain drop to almost nothing immediately…. just told her to thank God for her total healing and the little residue would go. A lady with severe blood circulation problems, causing ulcerated legs, felt instant ease, and felt coldness go through her as she was prayed for. I guess you put ice on swollen and inflamed parts of the body, so cold coming from the Holy Spirit will do fine! 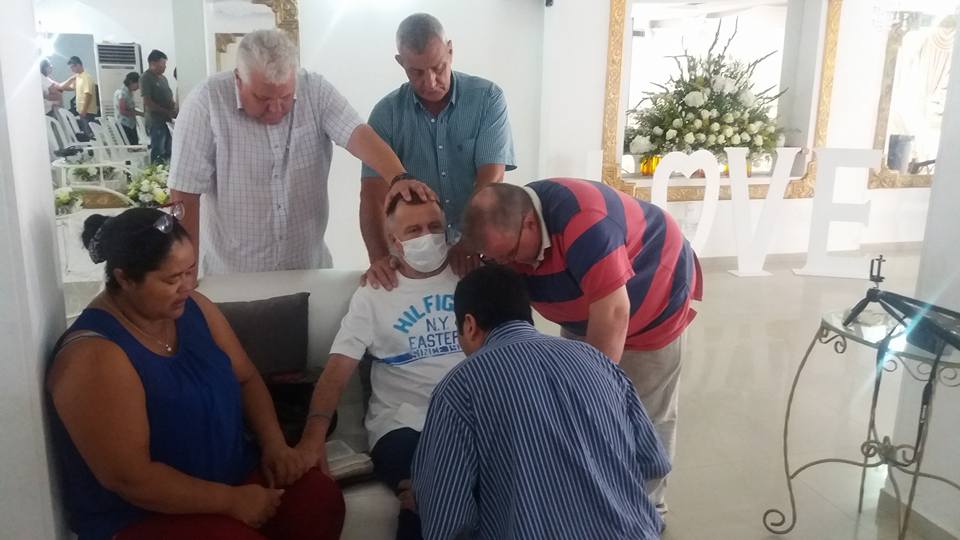 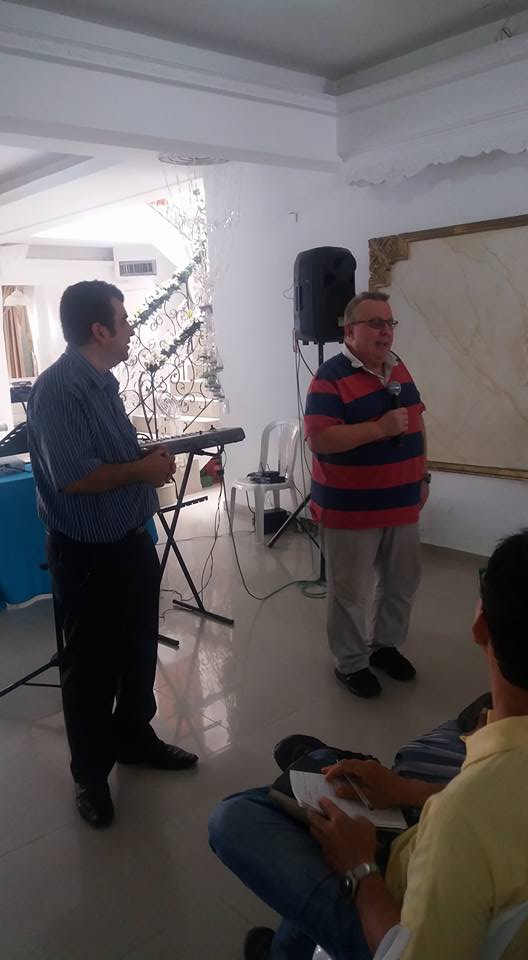 Lovely Wilson Acevedo Pulido, translating for the man whose size prevents being kidnapped… 😉 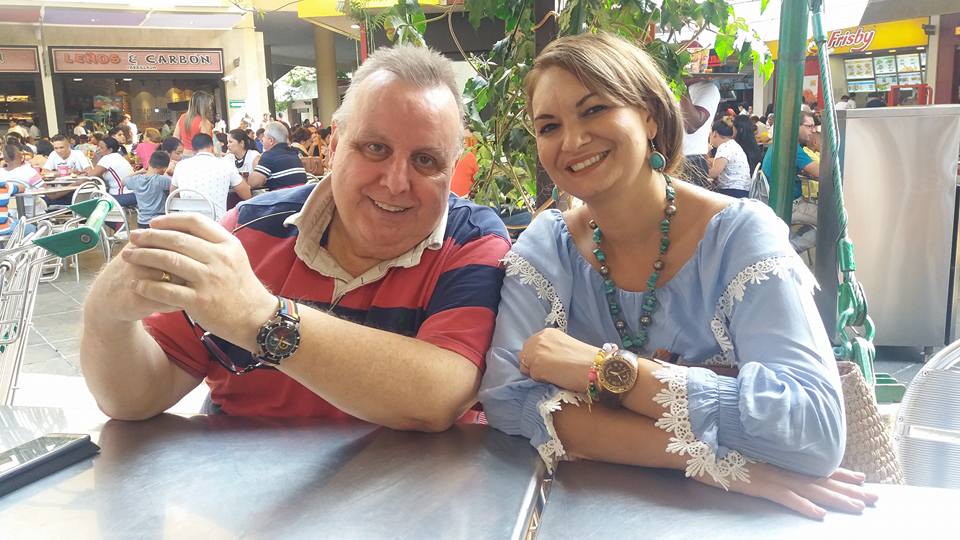 With Daniela Stelea – good to be able to say ‘Buna Diminiata’ rather than ‘Buenos Dias’ to her! My watch strap is the colours of both flags…. : Daniela is from Călărași, between Bucuresti and Constanța, I preached there in about 1991-2. Small world!

A lovely church: wonderful to be with Wilson and Daniela, odd Romanian words popping into my memory from time to time fell out of my mouth 😉 – and then to go with them as they took us for lunch. Thank you for that, guys!! There were lots more testimonies, maybe some more will appear in a future blog, but this one’s been pretty long already!

« Thanney the magician!
Extending the Kingdom of Heaven on earth…. »