After the ‘traumas’ of last year and not being able to walk for so long, it’s wonderful – post-move back to England – to be back on the road again, back in harness!

The move is absolutely right, though the limitations of my knees have meant that the flat still looks like Vesuvius has erupted, and a further ‘purge’ of my ‘stuff’ is essential to get everything in the flat! It’s most definitely been a giant leap of faith coming to Northfleet (next door to Gravesend) in so many respects, but I’ve always tried over the 40 years of this life God’s called me to never to shy away from wanting him to stretch my faith. A second floor flat in a block with no lift and about 30 stairs to climb (!) is a part of that, but I’ve always managed to get up the stairs and make it back to the flat when I’ve gone out! The cost of living in England is considerably higher than Northern Ireland, but I’m in faith that God, through whatever means he chooses, will meet every need. It’s worth it just to be at Eastgate Church, which is so alive with the presence of God, the vision so huge, the faith so high….

It also, of course, makes it easier to get to go to churches in Britain, no flight to get to England first before driving to wherever God takes me to be involved: and easy access to a variety of motorways – I’m just 5 minutes from the M2, 10 from the M25, which opens up the nation, albeit sometimes in a three or four lane moving car-park! Heathrow, Gatwick, Stansted, and Luton airports are all pretty accessible, with Heathrow being about an hour away on a good day.

So it was with delight that yesterday, I had my first ‘on the road’ visit to a church since moving in 3 weeks ago – the lovely Old Town Community Church, Eastbourne (probably 7 years since I was last there), with a couple of lovely friends from my new church. We arrived straight into a healing/deliverance need, my great friend Gerry Page led the worship, which was great, and then the three of us got into praying for healing and blessing for a good number of the people in the church. There were some healings, some that began the healing process, and – as it’s not possible for God NOT to answer prayer – others that will happen in the days to come. One lovely friend, Graham, who’s a musician, had a blockage in his ear, not good for a musician: it went yesterday morning. Thank you Jesus! It was a challenge for me, as I can’t preach sitting down – it just doesn’t feel ‘right’ (!) – so I stood for an hour, without a walking stick: I didn’t realise I’d spoken for so long, but once the testimony stories start, I find it hard to stop telling them! The hospitality was wonderful, the folk there gave us a gorgeous lunch, and it was so good to back doing what I love doing, even though I’m still really nervous before every meeting. More like that, please, Lord!

After almost a year ‘out’ with the knee issues of last year, I have this ‘fear’ (not really fear, but you’ll know what I mean!) that I’ll have fallen off of people’s radars when it comes to being invited to churches – so if I fell off of yours, here I am telling you I’m BACK ON THE ROAD AGAIN! I’d love to come to your church/meeting/weekend away….. 07976 520325 is the number, and paul@paulbennison.com if you’d rather email.

If you’re willing to help me get re-established in this way, I’d be grateful and love it: if you can help practically with finance, as an individual, one-off or regular monthly support (my rent is just a BIT higher than it was in Bangor (like 300%!), I’d be really grateful to you and to God. I can send standing order forms if you don’t pay tax, or Stewardship forms if you do. My landlord is lovely (he’s in the same church) , and I’m praying that I won’t ever be in a position where I can’t pay him! Bless you and thank you.

In a few weeks’ time, I’ll be heading off to Colombia, God willing – with my great mate Thanney, for lots of meetings, and the beginning of the construction of another brand new home for street kids. This time, four floors, having had to demolish the existing house, which is collapsing. When we went after that house 2 years ago, we were told we couldn’t have it: last July, Thanney talked to the community leader, told him the plans, and instead of having to buy it, we were offered the property rent-free for at least 100 years! I’ll be 166, Thanney 165, when we have the option to renew it for another 100 years!! The ground floor will be for our lovely friends Hendrick and Teija, and Wilmar and Marlene, for an ‘El Abrigo’ church, second floor for the kids to use during the day, and the community in the evening, the top two floors solely for hundreds of street kids to live.

Please pray the funding comes through, it’s been promised by friends in Australia when they’ve received it from Asian banks who seem to be holding it up!

Hello CCW people. I thought I’d share an encouragement. In the days running to Christmas I had a very painful back, caused by a problem with my sciatic nerve (good to have a Dr in the family!). I could hardly walk for several days. It was a little better by Christmas day, though painful again by midday-ish. So I asked Paul Bennison to pray for me when we met on Christmas morning at Lindisfarne House. He did! I had less pain, though some, for the rest of the day. On Boxing Day though I woke up pain-free and only had a tiny twinge around 3.00pm. I had to put the roof box on my car about then so did so with Demi’s help. I had to stretch a bit to do that and was a bit nervous about it, but I felt nothing. And I’ve been free of pain and perfectly agile ever since. I’ve been on several long dog walks and, wait for it, did ‘I Fly’ the day after boxing day – that’s simulated skydiving 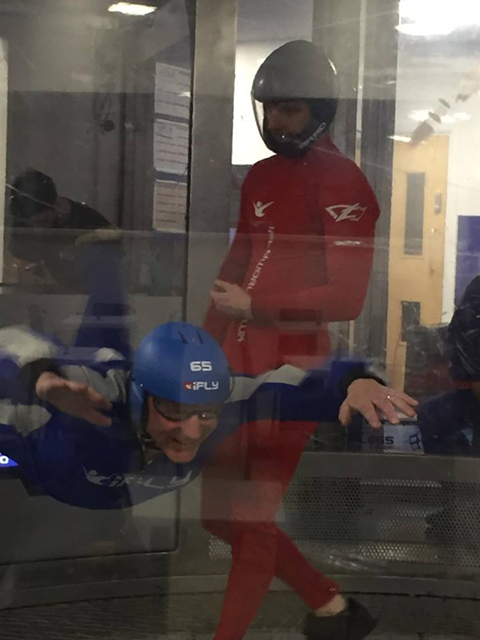 . Not a twinge! Photo attached. There is a theory that the roof box stretching was self-chiropractic, but even if so, the pain was better before that and I still see God’s hand in the stretching – it’s not something I do regularly!
Thank you Lord!

40 years ago today wasn’t when Sgt. Pepper taught the band to play, but I’m singing different words to the tune to celebrate this amazing anniversary…. who’d have thought it? Certainly not me! 40 years of God’s belief in me (much greater than my belief in myself!) and the privilege of seeing the RAW power of the Holy Spirit in miracle action… people I’ve met who have blown my mind, like meeting ex-dead ladies in China more than 30 years ago (which so impacted me that I knew I had to see it happen for myself – and God’s been gracious enough to allow me to see it happen three times, thoguh the first 10 stayed dead!)) and the pastor, Samuel Lamb,responsible for their – and countless other – resurrections, Jackie Pullinger-To, Ian Andrews, Bill Johnson, James Maloney, Colin Urquhart, Dario the Favela/cartel boss, Dean Sherman, John Wimber, Chuck Smith, Loren Cunningham, Floyd McClung, Brother Yun, David Hogan, Johnny Barr Gerald Coates, Ishmael Smale, Tom Deuschle, Petru Dugulescu, Graham Cooke, Pete Carter – the list is endless of people I’ve been privileged to meet, have pray for me for an impartation of their anointing, faith, power…

And from next week, God willing, the privilege of moving to Northfleet, in Kent, to be a part of one of the most exciting churches I’ve ever been to, Eastgate, where I’ll soak up everything I can to expand what I want t do in the future, small though ‘my’ (lol!!) ministry is….

God is so, so good: I thank him often that he chooses the weak to overturn the strong, and the foolish to confound the wise, and I’m certainly in the weak and foolish camp!

The Meaning of Numbers in the Bible: The Number 40

Mentioning 146 times in Scripture, the number 40 generally symbolizes a period of testing, trial or probation. During Moses’ life he lived forty years in Egypt and forty years in the desert before God selected him to lead his people out of slavery.

The prophet Jonah powerfully warned ancient Nineveh, for forty days, that its destruction would come because of its many sins. The prophet Ezekiel laid on His right side for 40 days to symbolize Judah’s sins (Ezekiel 4:6).

Elijah went 40 days without food or water at Mount Horeb. Jesus was tempted by the devil not just three times, but MANY times during the 40 days and nights he fasted just before his ministry began. He also appeared to his disciples and others for 40 days after his resurrection from the dead.

The number forty can also represent a generation of man. Because of their sins after leaving Egypt, God swore that the generation of Israelites who left Egyptian bondage would not enter their inheritance in Canaan (Deuteronomy 1). The children of Israel were punished by wandering the wilderness for 40 years before a new generation was allowed to possess the promised land.

Jesus, just days before his crucifixion, prophesied the total destruction of Jerusalem (Matthew 24:1 – 2, Mark 13:1 – 2). Forty years after his crucifixion in 30 A.D., the mighty Roman Empire destroyed the city and burned its beloved temple to the ground.

Appearances of the number forty

The book of Exodus, with its 40 chapters and 1,213 verses, is the seventh longest book. The longest is the Psalms.

From the time they entered the promised land, to the time of King Saul, Israel was sporadically governed by a number of individuals known as Judges. Though they did not rule like a king, they nevertheless had a tremendous influence on the people, as they represented God and were inspired to execute his will. Judges who served 40 years include Othniel, Deborah and Barak, Eli and Gideon.

The first three human kings over the children of Israel, Saul, David and Solomon, each ruled for forty years (1050 to 930 B.C.). After the united kingdom split into two separate pieces, King Joash served forty years as one of Judah’s better kings.

Abraham tried to bargain with God to NOT destroy Sodom and Gomorrah if forty righteous people were found (Genesis 18:29). Both Isaac and Esau were forty years old when they were first married (Genesis 25:20, 26:34).

God flooded the earth by having it rain for forty days and nights (Genesis 7:12). After the patriarch Jacob (Israel) died in Egypt, the Egyptians spent forty days embalming his body (Genesis 50:3).

How does the number 40 relate to humility?

God allowed the ancient Israelites, from time to time, to be harassed and dominated by certain enemies in order to chastise and humble them for their sins. The Philistine’s, in the southern and western parts of Israel’s land, harassed them from 1105 to 1065 B.C. God’s resolution to the harassment was Samson (see Judges 13:1, 1Samuel 7:13, 15 – 17).

Additional info on the Biblical Meaning of 40

The Bible was written by forty different people. Those called of God NOW are under probation, or judgment, based on how they live by every word of God.