In November 2011, I met, through a mutual friend and one of the local pastors, an amazing lady, Ana Beiba Lasso. She had – then – a smallish house in one of the toughest and most dangerous barios (district) of Cali. She also had – then – 65 old people living in her house, whom she’d pciked up from living on the streets, or who were about to be ‘evicted’ from hospital as they couldn’t pay their medical bills. Families also frequently abandon their old folk because they can’t afford to keep them….

There is no ‘social security’ or social services for these tragic people. Except that there is Ana Beiba…. when I first met her, she had, a month earlier, been told she had 3 months to live, having a brain tumour, and cancers elsewhere. That day, praying for her, she felt the tumour go. Last April, I visited again, again the guys I had with me: the number had grown by a few, but she was totally and utterly packed – almost – floor to ceiling. She does all the cooking on two small gas rings with a propane tank: she does all the laundry by hand. I know God told me, then, to try and raise support for her, as her biggest burden was the rent for her house: remember, no help from social services, she lived a totally ‘faith’ life. By November, thanks to some lovely people, I was able to take enough for her to be able to buy the house she was using: and, I thought, there was enough to by a commercial sized cooker, washing machine, and maybe a friedge & freezer…. 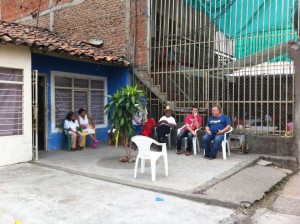 The house ‘next door’…

Then she told me that the house next door – attached to hers (semi-detached for all us educated Brits!) – was up for sale, but for an extorionate amount. I sensed God telling me to get someone to call the owner, and offer just a third of the price (about the amount I’d raised for appliances!) for cash: the owner accepted. This video is the moment when I had the total, utter joy of telling Ana that she could buy both houses… at that moment of realisation, she almost crushed my ribs, broke my neck, and suffocated me, as well as deafen me with her wail…!

This visit, March 2013, I’ve bought some more sacrificially given money to buy some, hopefully all, of those appliances – at least, that’s what I think will happen to the money – until I see her! I’ll probably discover the house the other side is up for sale….