Now I’ve been home a week, thoroughly enjoying the ‘down’ time, though meeting up and spending time with friends necessarily, as I’m away pretty frequently. It also gives me time to ponder, study, read some of the more ‘serious’ things on Facebook (I have to confess to not being into any of the ‘games’ – and it drives me nuts (steering wheel between the knees??!!! 🙂 ) to get so many requests…

Something the bothers me is something that God dealt with in me a while back. Before I say what, did you see that brilliant film – probably about 1998, with Matt Damon & Robin Williams (a double ‘Oscar’ film) ‘Good Will Hunting’.

Maybe for the more ‘faint at heart’ Christians it was to be avoided because of the language, but it was a wonderful story of redemption, salvation, freedom, and total & utter committed friendship and belief. Matt Damon, who co-wrote it & produced it, with Ben Affleck, played Will. Robin Williams was a Psychologist, Sean. Damon came from a rough history, trouble with family, the ‘wrong’ friends, the law, drugs, violence – but though he was ‘only’ a cleaner at a University, he was also a mathematical genius. A professor discovered this: got him ‘saved’ from a lengthy jail sentence, providing that Sean produced reports on his progress: the professor used Sean as ‘assistance’ in ‘putting him right’ so that the he could ‘tout’ him around the world as the greatest mathematician that ever lived. 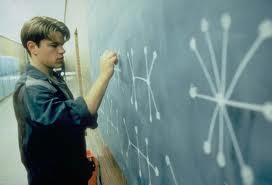 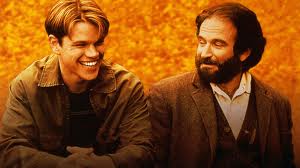 Will wasn’t easy to be around: aggressive, young (18/19 then). The professor got frustrated with him, but Sean persisted with friendship, not necessarily psycho-analysis. Will made some pretty serious blunders: still Sean persisted. Right at the end, just Will & Sean in Sean’s messy study, Sean has to produce a report for the courts on how Will had done. Of course, Will had done some stupid stuff, illegal stuff: and assumed Sean’s report would reflect this.

Sean stood there, court/police files open in his hands, when Will asks him, ‘What are you going to tell them, Sean?’. What seemed like forever followed before Sean’s answer. He closed the files, looked at Will, and said, ‘It’s not your fault, Will: it’s not your fault, it’s not your fault’ – half a dozen times before Will got angry with him, shouting ‘Don’t you f*** with me, Sean, don’t you f*** with me. Everyone’s f***ed with me all my life’, physically grabbing Sean as he shouted. Through it all, Sean just kept saying the same words… until, after about the 10th time, Will just burst into tears, they hugged each other, and belief and freedom came to Will….

I meet so many Christians (and I was one until not so very long ago) who carry their history with them, their ‘perceived’ (maybe actual) failures, into the present and on, into the future. All it does is cripple us: give the enemy a foothold where he shouldn’t even be allowed a ‘toehold’, until in the end it becomes a stranglehold, and we end up believing that things can, and will, never be any different.

I’ve thought about this loads in recent years, as the enemy’s wanted to pile up history ‘against’ me, and I carried it, though crippling me in so many ways, because, well, that’s what you do, and you deserve it, Bennison….but more and more, as I’ve read, and preached, Scripture (yes, I can do that as well as tell stories!!!), I often preach from Romans 8, which of course is a wholly magnificent, triumphal, chapter….ALL things work together for God, future glory, creation groaning for the revelation of – US!!! You, me, not the United States!!! We are MORE – MORE – MORE!!! – than conquerors through him who loved us. Then… v. 38… I am CONVINCED that neither death nor life, neither angels nor demons, neither the present nor the future, nor any powers, neither height nor depth, nor ANYTHING else in ALL creation, will be able to separate us from the love of God that is in Christ Jesus our Lord’…. amazing words…

BUT….the more I’ve read it, the more I began to realise there’s a word missing. PAST. ‘Neither the PRESENT nor FUTURE’…where’s ‘past?’ Wholly, totally, redeemed BY JESUS, and it is HIS to keep, and nothing to do with us any more…. ‘Will, it’s NOT YOUR FAULT’….

At one of the wonderful RHINOS get-togethers, a good while back now, I’d had my ‘sharing’ time, and was struggling with some aspects of my history, and the failure I’d carried from it, shared it with the guys (HOW WE NEED people who we can be 100% honest with, without fear, who then speak into our lives…), and they were gathered round me, like Indians round a totem pole(!) praying, shouting, declaring: when one fell to his knees in front of me, took hold of my hands, told me to look at him (difficult through tear-filled eyes), and just repeated and repeated, ‘Paul, it’s not your fault: Paul, it’s not your fault…’ about a dozen times. At that moment, my past was obliterated, my failures, some perceived, some right, some wrongly that I’d beaten myself up with, disappeared…

And watch ‘Good Will Hunting’ if you can….