One of the things I (hope) I’ve always been very ‘hot’ on, is doing everything in my power NOT to be ‘super-spiritual’. A lot of what happens to us in our lives would happen whether we are IN the Kingdom of whether we are NOT in the Kingdom of God. It drives me nuts when I hear people coming out with stuff (and I’ve heard stuff like this many times!) like: ‘I desperately wanted to go to the meeting, but I got a puncture, so it was obvious the enemy wanted to stop me’… Maybe, just maybe, 0.000001% that might happen, but for most of us, we drove over a nail or glass or something similar. ‘I wanted to give a gift to….(name)but then an unexpected bill came, so the enemy obviously didn’t want me to’…. not TOO many of us have totally ‘unexpected bills’, surely?

My car in Ireland is due its MOT by 8 July (annual check if any Americans still read my blog!!!), and the road tax is due 31 July. One big bill (for me, at least – tax), and POSSIBLY almost probably another, as the car is quiet geriatric now, and last year it cost over £500 to get it through the MOT. Unexpected? Maybe, in terms of the size, but not really, because of the age.

Super-spiritual people, and lots of self-styled prophets, seem to hear from God more in a day than Elijah, Jeremiah, Ezekiel, Daniel, John (want to to go on? No need? Right!) heard in their combined lifetimes. What also troubles me are the people, though, to whom anything to do with the devil is non-existent: he doesn’t trouble them. If he didn’t trouble me, I’d be concerned…

I grew up in a Christian culture that taught/hinted/implied that the enemy attacks you at your points of weakness. For years, I BELIEVED this: until it suddenly dawned on me, probably through an enemy attack, that it’s not my weakness he’s worried about, it’s my strengths. (I can hear some people saying now, ‘I don’t have a clue what your strengths are, Paul!). Satan knows that I know my weaknesses, and believe me, they are there: he batters me where I feel that I’m strong.

A few days ago, I put a little picture post on Facebook that summed up my life. It probably offended a few, as it had a….ooohhh….rude word in it (once upon a time, I used to think that God ‘minded’ rude words: over the last few years, I’ve heard him laugh as my ‘religious’ side used to ‘prickle’ when I heard them – until a friend, as then a ‘Christian in-Waiting’ – not yet a Christian, whisper in my ear, in a hospital in Cali, Colombia, upon hearing a diagnosis/prognosis on a young lady, early 20’s, with a tumour the size of a basketball in her stomach (I’d asked if she’d got problems with her pregnancy: duh!!! it was the oncology ward!), whisper the ‘f’ word with an ‘ing’, followed by ‘hell’ under his breath when he heard her story. I remember thinking I’d not begun a prayer for a miracle with that word before, and was glad he’d only whispered it in my ear, and not to the assembled group of Christians and patients(!), prayed for her, and her tumour went down like a balloon hit with a pin….at which point, he BELLOWED what he’d said less than 30 seconds earlier….

I was mortified by his exclamation, to the whole ward, at the same moment as being ecstatic, with the miracle: and I LITERALLY heard God laugh, and tell me what a religious prat I was…

For me, and I hope that you know this isn’t a boast, I know that having asked God to give me a gift of faith many years ago (the Gifts of the Spirit gift of faith), and having asked a handful of men in whom I’ve recognised that Gift of Faith to impart more to me. I’m not sure I’d have survived ‘salary-less’ for 34 years, and seen God do what I’ve been blown away by over that same time-frame, if God hadn’t begun to answer my prayer. So, being a strength, that’s often where Satan attacks me, and temptation arises.

I read today on Facebook a brilliant piece by a guy I know (a little – wish I could get to the States to know him a lot more!), Lance Wallnau. I have asked Lance if I can repost it, if he ends up saying no I’ll take it down! This is it: 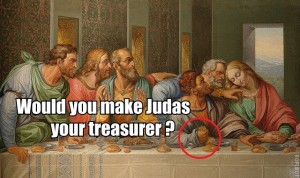 Does God want to set you up to fail? Actually, He is setting you up to succeed. The only way you can break through a weakness is to face it and overcome it. To break off the iniquity – you must face off with the iniquity.

God doesn’t tempt us – yet the Spirit drove Jesus into the wilderness to be tempted of the devil. Why? Meeting the tempter seems to be a right of passage into promotion. Did the Father want the Son to fail? Obviously not. He wanted the Son to be tested and qualified to drive the enemy out.

Maybe you and I are tempted most in the area we are called to drive out the devil? Look at the thing you struggle with now and consider if it isn’t a spirit somehow associated with the territory you are called to occupy. Judas had a gift for money and therefore had to overcome a spirit of greed. A strong leader may struggle with control, a great persuader with manipulation or seduction.

Temptation reveals weaknesses and “Owning” a weakness actually makes you more authentic. It makes you more generous with others who fall and the humility you experience creates a vacuum in you that draws in greater grace! God gives grace to the humble. Grace is the word that describes a current of divine energizing power from Heaven. As you draw near to Him, He gives you grace and this creates energy to overcome. Heaven creates a table for you right “in the presence of your enemies.” You “occupy till He comes.” You don’t run from the pressure. Heaven wants you to win. You’ll never meet a temptation you do not have ability to resist. (read 1 Cor 10:13)

And you’ll never be held back from promotion because you might be tempted. In fact your weakness and your strength are so intertwined that you will surely meet temptation as you advance. Don’t let it stop you.

A number of people have said the same thing to me in the last couple of years. A couple of weeks ago, a friend who wouldn’t normally be a recipient of ‘significant’ dreams, and more, not the sort to pass one on, said this to me: it’s both astonishingly encouraging, and somewhat scary…. he saw Satan go to God, like he did in Job’s story, and ask God for permission to ‘have’ me. In the dream, God said, ‘Yes, but you can never take his life’. Like I said, a few people have used Job’s story as something that God’s given them to explain my situation….I’d never want to even begin to compare myself to Job, but there are ‘similarities’ though!  No wonder the onslaught has ‘hotted up’, with the various medical diagnoses I’m ‘under’ – though I want to emphasise that I’m NOT UNDER them! I’ll know, two weeks today (if they tell you on the day) if I have ‘diagnosed’ bowel cancer, the aortic stenosis (I could google it, but I’ve really no idea!!), and these old knees…..slipped down two or three stairs of my very ‘difficult’ staircase at the end of last week (it’s narrow, shallow, and steep – perfect for crocked knees! – Not!!).

Lots of people I know, who’d be in a ‘radical’ camp (as far as most people are concerned – but surely it should just be ‘normal’ for Kingdom Christians?) – are under immense attack – from friends leading international ministries seeing God heal on the streets, to others church planting in one of the spiritually ‘darkest’ parts of France, to others suffering extreme, unusual illneses…. Satan doesn’t attack because we’re weak… he attacks because we’re strong. Let’s guard our strong points, like Lance’s article points out…

« The long and winding….road?
A little – more? – or less? – information… amazing miracles, and a tragedy of a welfare state… »