Those of you who know me well, or who might have read my blog post of 21st May, will know that, despite how I appear to people in public, life hasn’t always – often? – been easy. I don’t want to go ‘navel-gazing’ here, but I watched an old-ish film today (1997), one of my favourites: ‘Good Will Hunting’, with the amazing Robin Williams and Matt Damon.

Will (Damon) had lived a tough, troubled life coming from the wrong side of Boston, Sean (Williams) the psychologist who took him under his wing, and loved him. Will carried with him all the grief and guilt from his past, his criminal record, his problems. Sean saw in him something ‘saveable’, despite Will letting him down many times. The culmination of the film, in Sean’s office, is one of the most powerful scenes – I’d say, from my point of view – EVER, in a film. 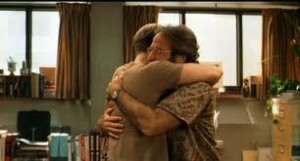 Sean (Robin Williams) hugs troubled rebel Will (Matt Damon) as Will finally, finally realises that his life had not been his fault…

Sean stands in front of Will, his police record file in his hands, with Will expecting him to give a negative report to the police, which would more than likely see him jailed. Will asks him ‘What are you going to say to them, Sean?’

Sean closes the file: well, watch it (no apologies for any bad language, it’s the way a lot of people outside our holy huddles talk!) –

You know, from my history, and certainly from my failures, and, worse still, the judgement of other people, there was so much crap that I carried, albeit with a smile on my face in public, knowing how much of what was being said was untrue, and, sadly, losing a few ‘friends’ who chose to believe lies. About a year ago, at one of the get-togethers of our little ‘Rhino’ group – a place where I can wear my heart on my sleeve, and say what I’m REALLY feeling – I caved in, the weight of years of of trying to carry stuff I didn’t need to carry…..

Five of the other six guys were gathered round me, praying, prophesying, encouraging me, as I sat and wept. Then, I felt someone take my hands: as I opened my eyes and looked through the tears, my dear friend Eric Delve was on his knees in front of me, holding my hands…. and he just said over and over and over again, the words of Sean to Will, in the film: ‘Look at me, son, it’s not your fault: it’s not your fault….’. The weight of years went that afternoon, in the beautiful surroundings of the House of the Open Door, where we meet, and God’s grace, after many times of Eric saying it, poured over me.

That’s GRACE: people are concerned right now that there seems to be a ‘hyper-Grace’ movement. How can you have too much grace? Wasn’t God, sending Jesus, to take all of your crap and mine, all of your sickness, all of your pain, and mine: our failures, the lies, the betrayals, abandonment – hyper-grace? I reckon so. And I’m so eternally grateful to God, to Jesus, and to dear, faithful friends, for grace and love that goes way beyond anything we can ever do for ourselves. Thank you, Dad…. it’s not my fault….. Friends – it’s not your fault…. Grace is amazing, and covers everything….

« Crawley again…. not so creepy anymore!
Cali comes to Bangor :) »