In a few days time, despite the fact that my somewhat painful knees are tying to tell me different, I head for beautiful Cali, Colombia, once again: the bombardment leading up to this trip suggests to me it’s gonna be a good ‘un, and even more so, for Alan & Barbara, with whom I’m going. I’m very grateful that I’ve managed – not by planning, as I haven’t worked out how the schedule works with Avianca airlines! – to get the direct flight into Cali from Madrid, so only one change en route from London, in Madrid…. I’m thrilled, too, to have just received another invitation to the super church, ‘Le Gospel’, in Rouen, France, later in the year, which means two visits to France coming up! Lisieux in October, and Rouen, probably the first weekend in December.

There ARE countries I miss from what used to be a packed schedule in the past, one day, hopefully, I’ll go back to some, but as age and the need (and desire!) to rest between trips, and be home, has grown, it means fewer ‘short’ trips to places than before. I remember, not so many years ago – maybe 6 or 7 – flying from London to Bucharest, Romania: spending a week there, flying back to England, next day flying to Nairobi, and then Kisumu, in Kenya (to preach a two hour drive away from Kisumu, in Eldoret) for a week, flying back from Kenya, then next flying to Colombia, for three weeks. As the latter then involved a transit ‘layover’ in the USA (those were the days!), it meant that I’d been on four continents in the space of about 9 days…. it exhausts me to even think about that now!

I’ve become increasingly protective of time at home: until 2-3 years back, if I’d got a ‘spare’ weekend at home, and someone asked me to go, I’d do it. Learning to say ‘no’ , or ‘later on’, are among the hardest things I’ve had to learn, but I know that if I’d been away this coming weekend, which invariably means early Friday to late Mondy/early Tuesday, there’s no way I could think of going to Cali on Thursday…..

I’m really thrilled, too, about the ‘teams’ that are coming together for the three week+ sojourn in Cali, at the end of October to mid-November. It’s now definite that Mark and Brian, my great mates from Maidstone, and Simon and Nick, from West Sussex are going, along with Gerry from Eastbourne, Robert from Melbourne, Australia (yippee!), and Paul, from Hove, are all with me. With the possibility, still, of Robert’s brother James, and Alan (again – I think he loves it as much as I do!). Looks like, even in a 5 bedded apartment, we could be heading for mattresses on the floor….two teams of 5, 7-9/10 days each… can’t wait.

Mentioning Nick, he sent me this picture tonight (he and Sarah are the couple who named this gorgeous boy – the smaller of the two!) after me, which as I’ve said before, is wonderful and humbling all at once: 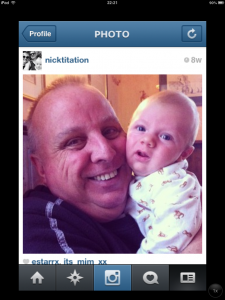 « Living on the edge – Save us from safety-nets, Lord!!
Life changing…..on your side »