You know, I’m a weird sort of bloke… for all the years I’ve had a website (I think the ‘old’ one was 7 years in April, the new one pretty much since then), I wondered if people read it, was it worth reading? did people think it ok?…. I never had a ‘hit’ counter on it. NOW, that’s all changed… I do have a hit counter. Worries over? Not a bit of it….! I wonder now why some days it gets lots of hits, and then worry on the days it doesn’t get many…. how fickle is that, eh? I never want to be one of those people who worry just because I’ve got nothing to worry about, but where the website is concerned, I seem to be turning into one! Hopefully, there’ll be loads of stories in the coming months, begiunning this weekend, when I arrive in Cali (Friday) Colombia again… then, having disciplined myself not to fill my diary, it begins a bit of a roller-coaster… but with gaps, so I can justify it (I think!) – on 8 August, I go out to my lovely friends Benny & Paty Osorio, in Mexico City, until 19 August, 6 September head off to Australia, 3 October to France, 15 October to Rhinos, 25 October to Colombia, 29 November to England and France….

I’ve said before, I didn’t ever want to be a ‘Facebook’ blogger who tells you they’ve had a nice lunch, or a ten minute afternoon nap…I DO repost things more when I’m at home, that I think are thought provoking or funny (some of them I can’t repost, even though they’re hilarious, because I’d probably lose a lot of ‘friends’!). Every now and again, too, I write something that has blessed me, and I hope it’ll bless you, or challenged me, or confirms stuff that I might preach/speak/deliver somewhere or other. I wrote yesterday about a wonderful book that’s blessed my life for almost 30 years, written by a wonderful guy: when I wrote it, it was just to say how much that first ‘letter from the Father’ had changed my life. I almost immediately heard back from the writer/minister, Charles Slagle, to say how much it had blessed him to read it… you never know when you’re going to bless people, do you? 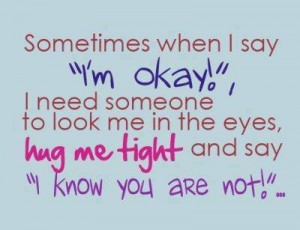 I reposted something on Facebook today, that pretty much says that (above): encouragers, ministers, preachers, ‘strong’ Christians (though Jeff Lucas’ book ‘There are no strong people’ is wonderful at bursting THAT bubble) – ALL need encouraging. If I’m honest, people who are always on a ‘spiritual high’ or ‘at the top of their game’ really worry me, and I try and avoid them…. that’s not defeatist, it’s just truth, that sometimes, I – and everyone else – needs a hug… We’ve got this ‘christianese’ mentality that says ‘I’m fine’ ‘I’m ok’ because we don’t want to expose the fact that we’re struggling, low, hurting… Years ago, I was in a church (no name, no place, to protect the guilty!) where the pastor would always be at the door at the end of the service, shaking hands with everyone. He’d ask a succession of people, ‘How are you?’ and they’d invariably answer ‘I’m fine’: his response was always, ‘Oh, good!’. One day, when it had been a really awful week, I decided not to do the ‘I’m fine’ bit, so I told him: his response was. ‘Oh good!’ – which either meant he didn’t care, or he wasn’t listening….one quite well known leader, some years back, had mastered the art of hugging you without ANY single part of his body touching yours. I don’t think I’ve ever felt more insincerely hugged in my life….

So, please don’t feel you HAVE to look at my blog! Just letting you know, that, despite some wonderful, wonderful stuff God has given me the privilege of seeing/doing/being involved in, there are times when insecurity, which only gets dealt with as you continually beat it to death, and being down, is as much part of my existence as it might be yours….

« Life changing…..on your side
‘I HAVE NOT BETRAYED YOU’ »