It was strange getting up at 3.30 am to say goodbye to Alan & Barbara, sad too, even though I’ll see them in a few days. Something happened this week that bonded our friendship closer (I feel, at least! – you’d better ask them if they feel the same!): and though we’ve done very few meetings together, we’ve ended up doing a lot together in ‘spare’ time, and a whole lot of meetings into the bargain. Barbara loved her first time here, meeting a few old friends, some she’d met in real life in Ireland, others through the best side of Facebook, and seemed very at home here, and very relaxed. She was great in front of an ‘audience’ (congregation seems such an old-fashioned English word these days, huh?), sharing her story, and her thoughts about Cali. Alan was…Alan: he’s an amazing man of faith, insight, perception, and understanding, and they blessed many, many people.

Could have done with them today, though! I was at a lovely church, way, way down south, in Valle de Lilli, I’ve been there in the past but not for some time. The Pastor, Rafael, is a lovely man, and I reckon that there were around 150-200 people there. The meeting began at 9.30, I got to speak about an hour later, and finished early – for me! – as I knew we’d have a lot of people to pray for: or rather, I’d have a lot of people to pray for! Prayed for the last person at just gone 2 pm, so a god 2½-2¾ hours…. poor Johan, the translator, he was more exhausted than me, as translation is an incredible ‘thinking on your feet in a second’ skill.

I could go through lists of the names I remember, but to be truthful, I don’t remember that many. I DO remember some of the amazing things that God did, though (and for any sceptics/cynics reading this, and thinking it’s exaggerated, remember that Rafael, Pastor William Castaño, Johan, and others read the blog!). The first lady was partially sighted: saw perfectly. Countless arthritic people all said that their pain had gone, a lady with acute lumbar pain was healed at the second attempt(!) – the pain had diminished drastically after the first one.

A lovely older man really blessed me – Alfredo. He’s the dad of one of the other Pastors of the church, and 81 years old. He had severe back pain, some of it from scoliosis, he’d had it for more years than he could remember, it massively affected his walking, and was also partially sighted. He ‘arrived’ for prayer, shuffling slowly, with the aid of a walking stick. Remember his age – I asked him what he wanted God to do for him. ‘I want to be able to walk easily, see fully, so that I can move into the new ministry God has got for me’… I asked him to get up, without using his stick, and walk to Pastor William: he did. Then back, then, as he walked away having hugged  me, the church broke out in spontaneous applause for this amazing man of God who’d been healed in back AND sight…..

Many people suffering financially got blessed: loads with pain in all parts of their bodies, went. More partially sighted people were healed – one with cataracts, and it was – literally – like shutters going up open her eyes one shutter at a time. She was over the moon (so was I!)! Johan reckoned that at least the first 20-25 were healed immediately, and he, too, was blown away by what he got involved in.

Again, maybe more stories will come back to me overnight, but as you can see, it was a ‘typical’ Cali church meeting!

But something made it even MORE astonishing: those of you who have read my meanderings here for some time, might remember that last November, I told a story about a guy named Dario, who’d come up for prayer, right at the end of the prayer ‘queue’: he’d had 30 surgeries in 15 months, and rather than asking him what was wrong (I knew what it was, instantly – you don’t have that many surgeries in such a short time for illness), I chatted with him, got to know him – and his bodyguard, Henri, from the Dominican Republic, for about 30 minutes. Then, having earned a bit of his confidence, I mentioned the surgeries again. He’d been shot, had been in a coma 26 days, no one thought he’d live, but he did….he’s the one when I prayed for him, put my arm round his – and Henri’s backs – straight onto guns. He was a ‘favela’ boss, ran ‘siccario’ agencies (the $10 killers on motorbikes). I asked him to give me his gun, as I believed it would set him free.He couldn’t, as he knew word would be ‘on the streets’ even before he left the church building. I prayed for him – and Henri – and a huge amount of healing of Dario’s body, and Henri’s back, were healed. He invited me to visit his ‘favela’ (google it! – lawless, drug/cartel areas of cities, especially here in South America), next time I was back. When I CAME back, Edwin, to whom he’d given his phone number – the first time in his life he’d given his phone number to anyone other than immediately family, or other favela leaders). had done some spring cleaning on his phone, and deleted it. I was SO disappointed.

Well… in church this morning was his mum!!! She came up to me and said that Dario had wanted to come, but going out in daylight is difficult as so many want to kill him, but that he’d sent his regards, and said ‘hi’. Mum gave me his phone number….. you have go through like a menu of people to get to him, people protecting him. But it look possible that tomorrow, at mid-day Cali time, I’ll be going with mum to see him…. God’s got his hand on this man, that I DO know: and whilst my stomach might be doing a raindance as we go there, I really do want to see him… pray for me, please! 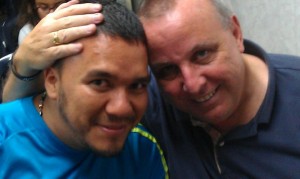