Delighted to fully confirm today two visits to France before Christmas – one in October, one in December. I so, so love France, just being there is a blessing, but being involved with two fantastic churches, is even better – ‘Le Source’, in Lisieux (October), and ‘Le Gospel’, in Rouen (December). It doesn’t seem possible that almost a year will have passed between visits to those churches, seems like only a few months at most. I remember my grandparents ALWAYS saying ‘time goes quicker when you get older’ – obviously it doesn’t, but it does SEEM to….not only that , I remember thinking how gross it was that my granddad always took, every day, his cod liver oil (just sounds so awful doesn’t it?) – now I take cod liver oil, and Omega 3 every day….. perhaps I’m becoming my granddad!

‘Le Souce’ in Liseux, is led by Francis & Diane Dognon, and is such a lovely church, not surprising really when it’s led by lovely people. Francis is French, Diane English, so communication is easy! ‘Le Gospel’ is led by Bernard & Anne-Margrethe Wenger, Swiss and Danish, respectively, and is also a wonderful church. I’m so delighted to be able to return to both.

Of course, the title of the blog has absolutely NOTHING to do with making these invitations even more appealing (liar!!) – of course, what it really means is that it’s just communion, with cheese…. 🙂 (for those whose French is worse than mine… bread, cheese, and wine… or (hopefully!) 10 baguettes, much cheese, and much wine!).

Now preparing for ‘Mundo de Fe’ church, Barak, Mexico City….leave for England Wednesday evening, fly to the world’s biggest city – and one of my MOST favourite cities, Mexico, a mere 32 million+ and counting, people…. the airport is right in the middle of the city, and so the huge transatlantic airliners come into land just a few hundred feet above one of the busiest roads – the Circuito Interior – in the world! It’s amazing…. It’s like a second second home! Cali and Mexico City vie for that spot! It’s because of Mexico City that I ever got involved in Colombia, anyway, meeting Colombians there way back in 1996! Benny & Paty Osorio remain among my closest friends, as does Benny’s mum, Mimi. His dad, a tremendous friend, with the ‘driest of dry’ sense of humour, went to be with Jesus 4 years ago, and I loved Enrique dearly. Miss him terribly.

It’l be great to be back there, as they’ve move to a new building since I was last there, and I’m looking forward to seeing it. Benny’s organised a few other meetings for me, too, and I’m hoping that he might head back to Cali with me in October….he was there in April.

Made a boo-boo last night – headed for a bathroom ‘pit-stop’ (at my age, it’s no longer optional!!), never put the lights on as it wakes you more, and – idiot – I slipped off a stair and tweaked my ‘worst’ knee, so would appreciate the prayers of any who feel led, to pray that’s it’s all hunky-dory by Wednesday! 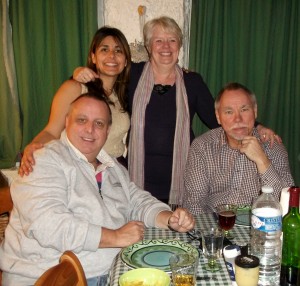