I’ve just received this message from Robert, on Facebook: we both prayed for this lady – the lady – ‘D’ – wants to remain anonymous (a Christian in Waiting??!!) – who’d got terrible shoulder problems, with her shoulder – she explains in her message – with the prognosis, and rehab time directed by the surgeon…. it was a week ago Thursday, we prayed, and she was scheduled for some fairly major surgery this week (Rob knows all about it, it happened to him!):

Paul, this is from one of the many shoulder people we prayed for.

Hey Rob, I have some extraordinary news. The MRI I had showed that I’d torn my tendon off the bone which meant I’d be in a sling for 6 weeks with months of rehab but when I had it op’d on yesterday the tendon was only frayed from a bone spur in my shoulder which means a sling for only a week & then it’ll be ok. The surgeon couldn’t explain why the MRI was different to how the shoulder actually was & I’ve just realised I think it was due to Paul. So I just wanted to say BLESS YOU for without you I would not have this wonderful outcome, you made me let go & let God & I can’t thank you & Paul enough. Please let him know.

So I’m letting you know, says Mr Hall, understatedly!!! Wonderful testimony, Rob…and for you, D, what a blessing!!! 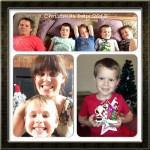 Just to prove Robert knows about shoulder surgery (from a few years back)….

And I reckoned, after 2 years of writing about Robert, Shey, Wesley, Lucas, Damon, and Callum, that it was about time you saw them…. here’s a little list of what God’s done for them in the past 14 months…. whole family pretty much cleared of all major food allergies (lactose, dairy, gluten, eggs, and more… Shey – epilepsy, the boys ‘in process’ (but well on their way out!) of varying degrees on the autism/asperger’s spectrum: Rob’s brother, James – major knee miracle(!), wider family – too many things to write and recall!! I’m so elated that Robert’s caught the Holy Spirit’s healing power and is a true Aussie male – not afraid to talk about it, and prays for every sort of miracle!