It’s been humbling, and an immense privilege to see God do so many miracles – yet again – during this time in Cali. We’re believing for many more tomorrow afternoon and evening, as we’re at a great church in the city of Jumbo (Yumbo), a ‘satellite’ city of Cali. When we were there in April, all the guys were interviewed for the city’s Christian radio programme, and one of those ‘miracles within a miracle’ is that the Pastor, Alex Betancurt, told me that he believes that I’m a ‘key person in the revival of these cities’. I don’t know about that, but I guess the meetings will have been advertised on the radio, so we could be in for a busy – and late! – night. Which is great for Pete and Kerry, as they have to BE at the airport by 5 am latest, on Thursday morning! I don’t have to be there until 1530 (5,30 pm) – wise old head 😉 !!

For me, it’s a miracle that I have as a great friend, and the co-ordinator/organiser of my programme here, the wonderful Pastor, William Castaño Baron. William is a Reverend Doctor of Theology, one of the loveliest, most humble men I’ve ever met. Yet the respect and esteem that he is held in in Colombia, and across Latin America, is incredible, and to have William both as a friend and ‘reference’, beggars belief to me. He opens up churches that look to him for leadership, input, advice – to me and the teams I bring with me. Humbling. We’ve just had the blessing of being in William and Leidy’s home, for empanadas, and other typical Caleño food: William, when giving me a copy of his book, ‘Revival’, signed it to ‘Paul, a faithful friend’. It blows me away. 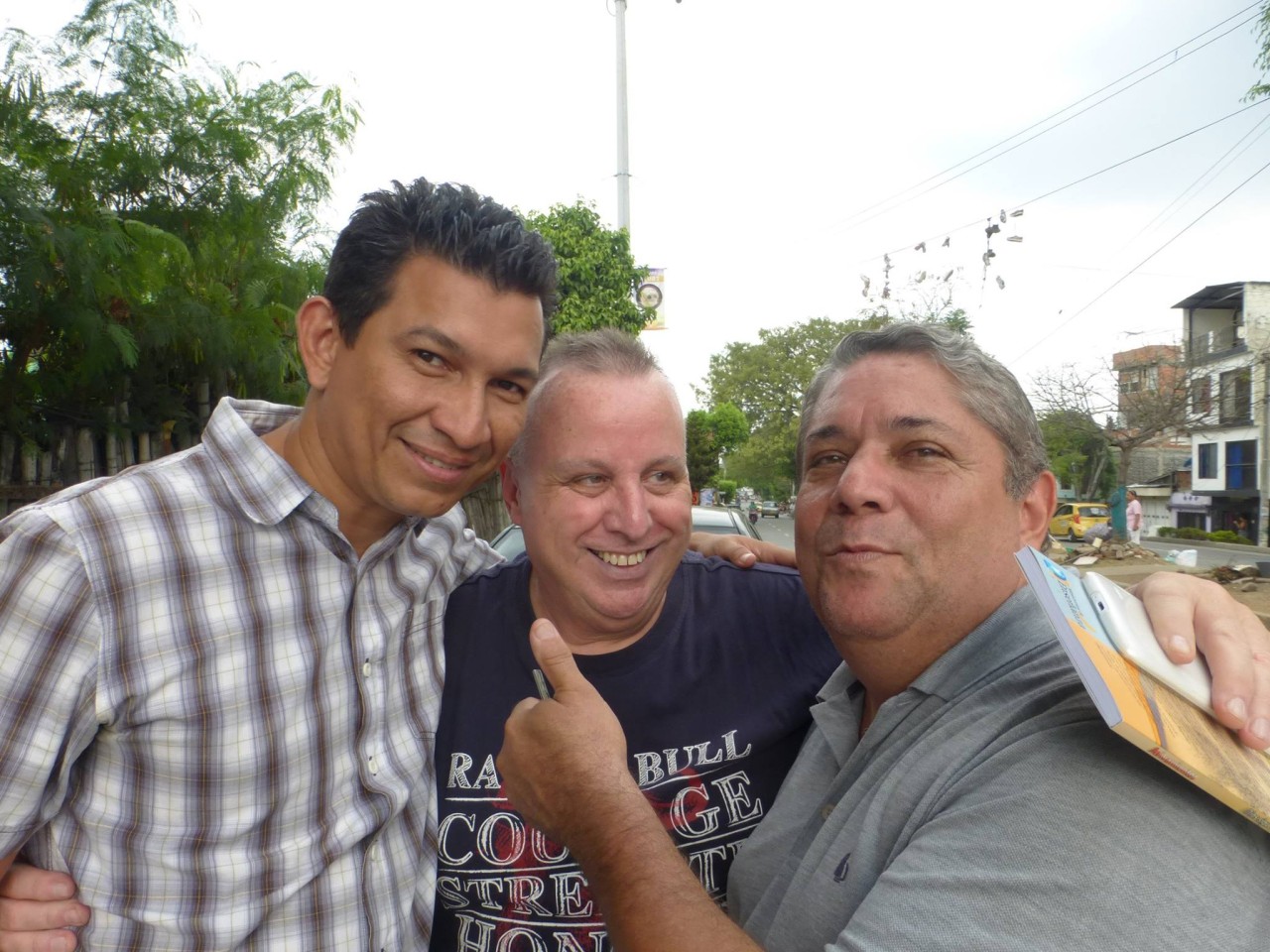 Two of the dearest friends a man could have: Pastors Wilmar Gomez and William Castaño Baron, with photo-bomber….I’m so privileged to be their friend

Today, my lovely friend Dario, known to regular readers of the blog, brought a friend of his to our apartment for prayer. This young woman’s husband died 6 years ago, she’s a Catholic, but was so open to prayer… she’s ‘plagued’ by sleeplessness, and unwanted visions in the night, terrible dreams. God brought real peace to her this afternoon, the pain in her head from 6 years of no more than 2 hours a night sleep, left her: she felt a weight go off of her as I broke the spirit of death that had assaulted her for so long. The ‘miracle within a miracle’ here is that Dario brought her: he brings many people to me, and my teams, for prayer. He said to her this afternoon that she needs to let everything go to Jesus, let him take it all, and to be protected by the blood of Jesus. Those who remember his (recent) history will know what a miracle THAT is: his grasp of the faith that he has chosen to grow and grow, is such a wonderful blessing. He said to me not long ago, ‘Paul, I know without any doubt that God is my Father’ – you don’t know that until you KNOW it. It’s revelation. A miracle within a miracle… ‘Paul’, he says, thumping his heart, ‘you are in my heart. I love you’… it makes me so happy that I want to cry…. 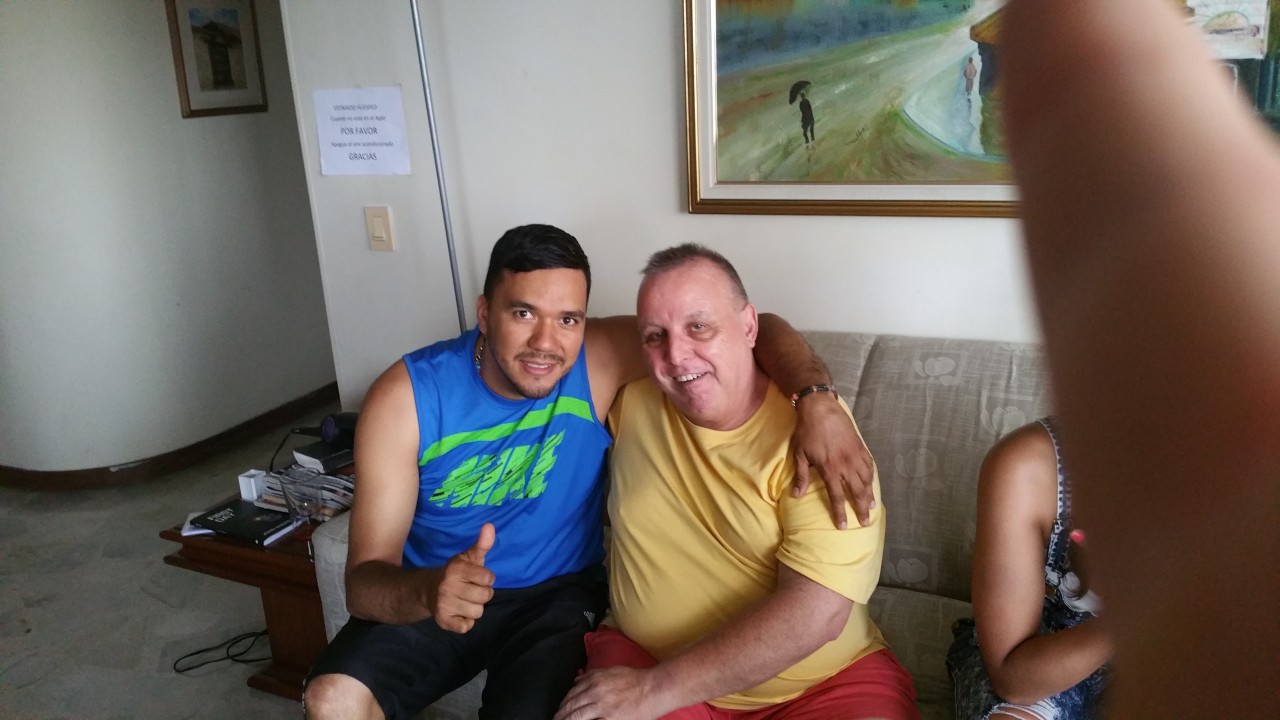 Dario, who’s friendship with me grows exponentially, at our apartment today, with Pete’s finger… 😉

William told me today that he’s heard from other pastors, whose churches we’ve been to, that many others have given testimony to healing over and above the ones we knew of – in the churches ‘Dios con Nosotros’ and ‘Altar de Aviviamiento’. It’s SO wonderful to get feedback.

Today, we made a flying visit to the Christian drug rehab centre. Pete and Kerry had decided that they wanted to buy the centre a new guitar, as theirs broke recently – so Pete and I went ‘guitar shopping’ a couple of days ago, and bought a really nice one for them. While we were there, we saw a great set of bongos, with a good solid stand: discovering that they were £60 inclusive, Pete opted for them, too. Caroline realised that they only had a handful of old King James Bibles, too, in pretty beaten up condition, so she bought half a dozen new Bibles for them. It was lovely to be able to just drop in and bless them. For THEM, a miracle within a miracle.

I’m hoping to see Dario once more before I leave, but, if it doesn’t work out, I’m back here again in 12 weeks’ time…. 🙂

« SOVEREIGN MOVE OF GOD – WHY NOT IN THE WESTERN WORLD?
Wonderful Holy Spirit healing & miracle encore!! »