Where do I begin, again, to write about Ana Beiba, and her home for Abandoned Old People? It’s not a case of repeating myself, because she’s always got new plans to take in more old people, extend this faith ministry further and further….

We arrived to be greeted by the ‘usual’ very loud clapping and cheering from her 120+-strong lovely residents: it’s really incredibly humbling – every process with Ana Beiba is humbling – to be greeted like returning heroes, when truly it’s a privilege to be involved with such a ‘Mother Theresa’ like lady, who loves her ‘babies’ more than her own life. What was immediately evident was that Ana Beiba was in excruciating pain as she walked, and with a limp that I could honestly describe as worse than mine when mine was dreadful…

I sat and chatted for a while whilst Andreas and Kristin had a guided tour: they were amazed at how organised, orderly, and tidy it was: not enough beds, but often they sleep two to a bed. That has to be significantly better that sleeping under wet cardboard under a bridge or in a gutter in the rainy season…and this week has some amazing rain….a massive storm blocked major roads with lakes: took out the traffic lights…and, by Colombian’s standards, it’s not been warm (29°C+ day, 22°C at night!!). Many people as yet not rescued by dear Ana will have died. 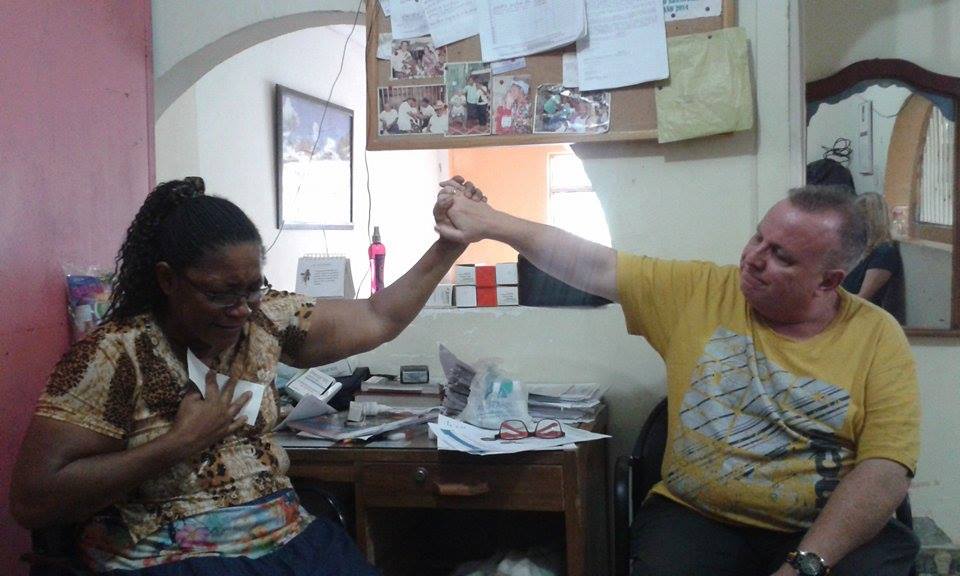 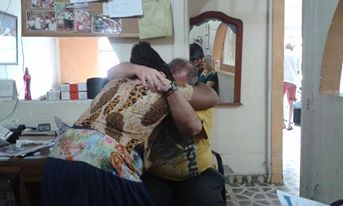 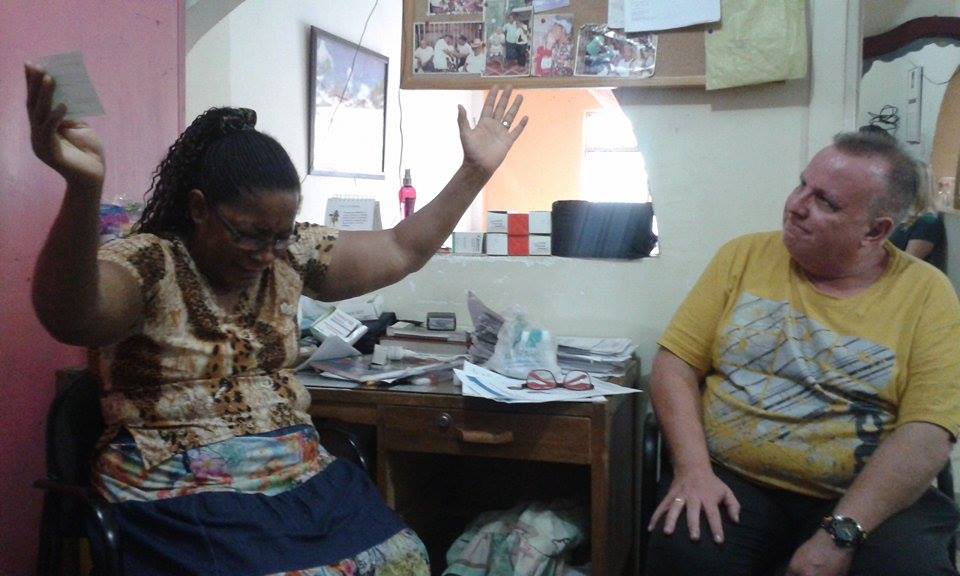 Ana Beiba..thanking God for his blessing and provision…

I asked her about  her vision: the double-fronted ‘shop’ on the corner (large building, but rat infested, with many other creatures that provide significant threat health wise to her babies) is up for sale. It’s attached to her houses, so could be knocked through to make one huge place, and, probably, accommodate 200 more. She’s offered to buy it… 150,000,000 pesos (GB£35,000, so around US$55,000, AU$72,000)…November and December are the two worst months, she told me, for homeless old people, as families turn them out to finance Christmas, and hospitals want accounts settled by the end of the year…. I guess I don’t need you to tell you what I want to do….??!!

Handing over the cheque for 50,000,000 pesos  (approximately GB£12,000)  to complete the construction of her second house (the one above will the numbers 3 and 4), instantly produced a typical response: arms raised to heaven, thanking God, praying….no singing this time as I think her hip pain muted her a wee bit. But no…she fell to her knees (osteoarthritis and kneeling down I know all about!!), and came, on her knees, to hug me, strangle me, suffocate me….we were both in tears. Getting her up off the floor was a major exercise, involving Andreas, Kristin, Wilmar, and me… thank you, thank you, thank you, to a certain dear friend back home in England who has facilitated the building project (over the last 2 years, £33,000 more, too)….

I asked her about her walking problem: acute osteoarthritis of her left hip (God’s sense of humour and osteoarthritis and me is still something I can smile about…just hope I can KEEP smiling until he finally blesses me with my turn for healing!). Ana has many stairs in her home, including a difficult main staircase that is narrow steel with a sharp bend…she has to lift her babies frequently, and it was proving more and more difficult. I’ve been involved with Ana and her project for 4-5 years now: God has healed her three times of ‘terminal’ prognoses for cancer, so we set to on her hip on Thursday. Within moments, she was up, bouncing up and down on both legs, and THEN the one leg that had been crippled, dropping to her knees, getting up straight away unaided… thank you, Jesus!! She was deliriously happy….so was I….if, at the same time, having to ‘fight back’ the tiny, tiny twinge of ‘please, Lord…?’ for my healing….

Time passes quickly at Ana’s….and then we were en route for, what I was told by a taxi driver, one of the most dangerous barrios in the city – a new one to me, Compartir (To Share’ – most like with guns to the head!!). It’s a long way ‘into’ Agua Blanca, long drive, on lakes even longer! A new church, pastored by a lovely man, Orlando. The small building was packed: Kristin shared something God had given her, which was great: Andreas shared testimonies he’s seen God give to people…I think we prayed for just about everyone. At least two – maybe more – deaf people heard: as always, osteoarthritis reared its pain and went(!!), a man involved in a motorbike accident, with a smashed knee was healed, his wife, a young mum, injured in a different accident – severely broke both arms in multiple places, her arms were filled with steel plates, and had very little movement in any direction… God started by removing/dissolving the largest steel plate on the top of her right forearm, and a smaller one under her wrist in the carpal tunnel area… she began to laterally and vertically move both arms, which meant – it could ONLY mean, with the movements she made – that the steel had gone…

Many more testimonies which I’ll get Andreas and (they’ve been absolutely brilliant, fantastic to have here, and so on fire for God) Kristin to write about….and back to the apartment after a long, emotionally draining day….

At 7am Friday morning, my lovely Swedish friends were up, and at a school to speak for an hour or more…. children are just not my ‘calling’ (!!), so I felt it prudent to rest my recently injected and treated legs with a bit of tlc…. many kids prayed for…they had a great time! 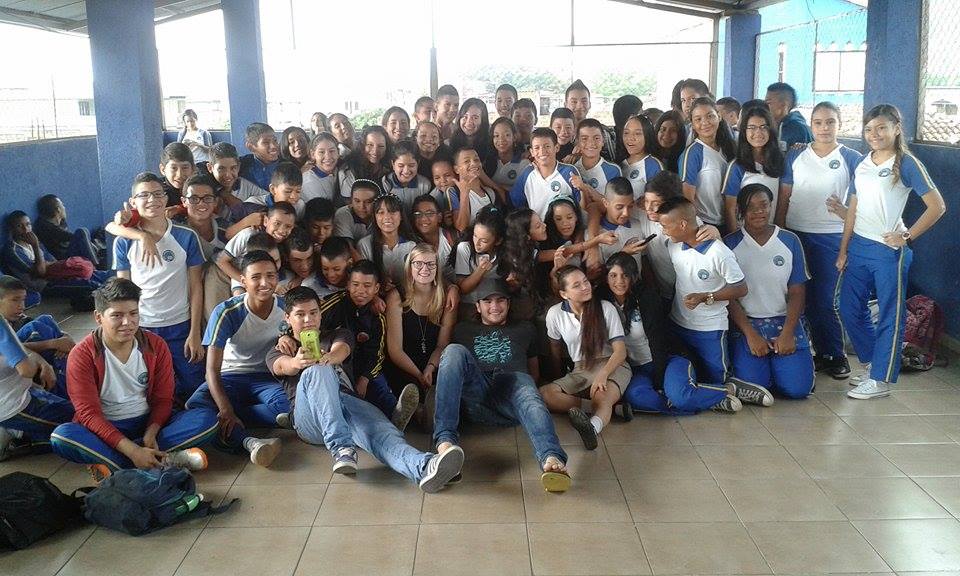