Saturday was a busy day – pretty much full-on all day – I had a 2½ hour seminar on healing in the morning (it hould have been 2 hours, but I’m still on Colombian time!!): a 2 hour + practical workshop in the afternoon – a ‘hands-on’ fo the people attending – literally: and (theoretically) a 2½ meeting in te evening. That stretched to nearer 5 hours with the prayer time for healing….

It was great to see around 60 people there – to commit a Saturday to a healing seminar is quite something, and it was lovely to ‘feel’ faith rise as testimonies of what Jesus is doing – recently too, from Londonderry, Colombia, and France the previous two days – were related through the stories I have stockpiled…. my passion is to see others begin to believe, and then be equipped, to go out into the world – be it family, neighbours, street, towns, places of work, or the nations – and do what Jesus did. I’d say tha the response on Saturday was far more enthuisastic, and  the desire to do it greater, than in many places I’ve done similar seminars.

I’ve found, too, that people are encouraged to know that ‘even’ people whose lives are dedicated to healing the sick and evangelism, can be unwell / infirm / sick. My own history is that I was born very sick, and spent many of my first six years in, or visiting, Whipps Cross Hospital, in Leytonstone, London. From what my mum told me, they couldn’t find what was wrong: just get me out of the London air and it might help. It was in Eastbourne, I think, the docs worked out I was celiac: incurable but controllable, yet I was healed of it by the time I was 13, when the word ‘healing’ seemed to have been deleted from the Bible and all preaching vocabulary… I was born (almost) spina bifida – a hole in my spine 1mm away from that dreadful infirmity. That was healed when I was 18, in 1971, a preacher named George Tarleton praying for me, and our youth group seeing the first ever ‘leg lengthening’ (actully, it’s the back straightening most of the time) that we’d ever seen… and now osteoarthritis… Praying for the sick doesn’t make you immune from being sick: in fact, I think it  makes you a massive great target for the enemy’s assault.

The seminar seemed well received, as di the practical. Probably 60% of those attending (again, a really good turnout, with a large proportion being French, and not ex-pats, which is the story of the weekend – and it’s great!) needed prayer for healing, so the remainder payed for them. There were healings: waiting to find out just what! It was a great afternoon. There was a different translator too: someone who didn’t know me, or my voice. That can sometimes be a real stress: but a lovely Mexican girl, Alejandra, did a fantastic job. Spent some good time chatting with her and her husband, and in the evening, too. 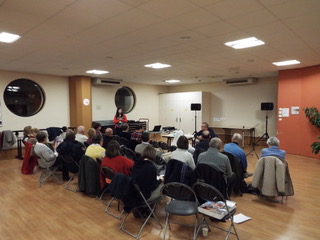 The evening saw the hall pretty full: again, a ig %age response for healing – others helped me with the praying, which was great. Again, I had people with the dreaded osteo……… (fill in the blanks!!) – and thank you, God, in them, it went… a man in great pain with a trapped sciatic nerve was healed in seconds, which is wonderful to see, a lady with arthritis everywhere felt strange sensations throughout her body, the pain reducing noticeably by the minute, and her bent fingers straightening…. and lots, lots more…. a lovely guy, Michael, from Dominica, had a catalogue of major things wrong, some things I’ve never come acoss before, that were absolutely vile ‘inventions’ of Satan. I won’t – for Michael’s sake, and yours! – go into a description of what was wrong, but just think haemorrhoids – and then multiply that horrible affliction by about 1000, and you get the picture…plus major league digestive problems, internal pain as a result, and as a result of other things internally, too. Michael wasn’t currently in pain ‘down below’ so couldn’t tell until he got home if he was healed: but all the internal pain in his digestive system went – and, as far as I can work out from my reading of the Gospels, Jesus never ‘half-healed’ anyone, he healed people totally. So I’m looking forward to hearing the rest of Michael’s tetimony one day….. Everyone I prayed for experienced pain going, or change of some sort, or intense heat or tingling or pins and needles in the part of their body that was ‘afflicted’ – it seemed that God answered the prayer for the heavens to open over Brem-sur-Mer: now for the heavens to stay open here!

There were more healings from the others praying. I’ll have to try and get their stories tomorrow! 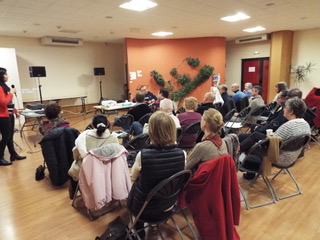 Today, Wednesday, there are two meetings, in Nantes, about 2 hours away – at 1700 pm, and 2030 pm. It’s going to be a late night home!! And we have to leave early, as I understand that the rush hour in Nantes is terrible – maybe it’ll be like being in Cali!!