Another of the wonderful ‘regular’ churches that I am so blessed to keep having the chance to go back to here in Cali…. the Pastors, Diego and Candy, have become such good friends, and their daughter and son in law, Hanny & Carlos (and their delightful 5 month old son, Samuel, who I met last night for the time – he really IS gorgeous!) are dear friends and great fun. Hanny draws the short straw in that she gets to translate for me! It was, as always, a lovely meeting: but we got there an hour or more late, as the heavens opened with the – probably – most spectacular thunder and rainstorm we’ve seen so far, and we watched as lightning struck overhead power cables and made some interesting sparks (!!), and took out the traffic lights…. Saturday evening on Cali’s roads with a river under the wheels, every car (it seemed) in the city out, and no traffic lights…. 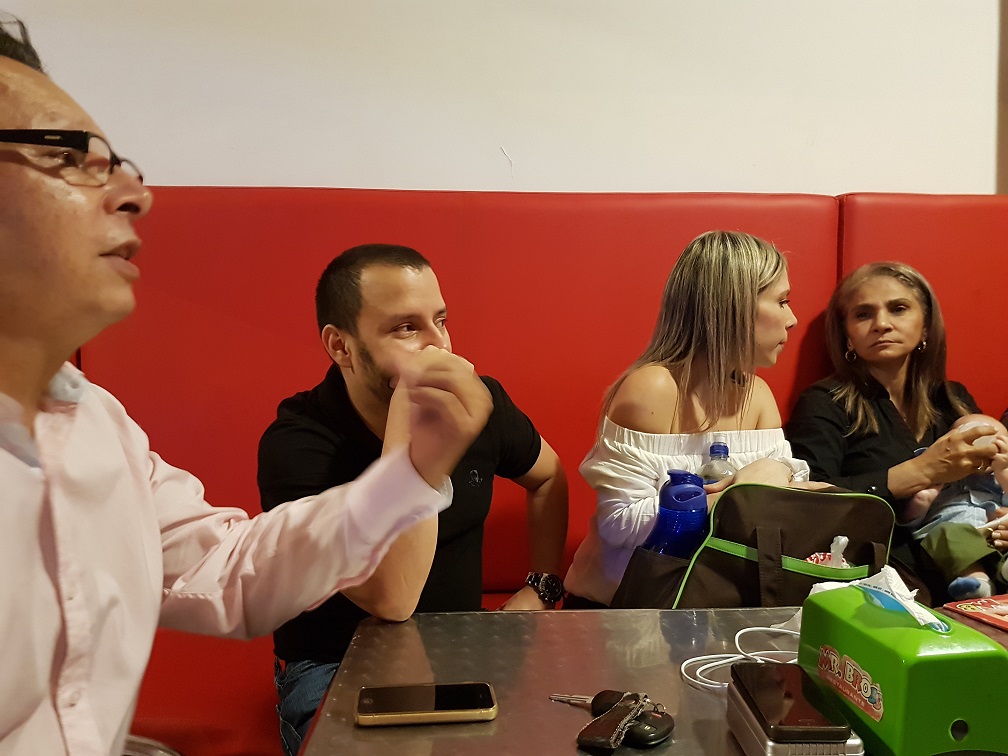 It’s wonderful the way churches keep worshipping until you get there! I can’t honestly ever see it happening at home in the UK, people would get bored, leave… and here, they don’t just sing, they REALLY worship. It continued for about another 20 minutes after we arrived, so we were able to get the ‘feel’ of the meeting…. some years ago, I was due to preach in a satellite city of Cali, Jumbo: our driver that evening is true Colombian in his time keeping, and we got to the church 3½ hours late…. they were still worshipping! I have to say that the Pastor was a bit white, incendiary with rage(!!), but God did some wonders that night, including beginning to bring feeling back to the paralysed body of a man from the church, who’d broken his spine in a motorbike accident 15 years earlier….

Last night was great. Thanney’s going down so well in all the churches, they love his accent 😉 – and Hanny told him that he wasn’t the hard one to translate for, I was!! Cheeky!! My problem is that as I get into it, and get excited with what God’s doing, I go faster…. God’s put a word on my heart for this trip, which – unbeknown to me – ties in with the early arrival of the rain and thunderstorm season. It was such a blessing last night to have a number of people come for prayer, and say that ‘this’ of what I shared spoke right to them, or ‘that’ the same…. ‘Thus far has the Lord helped us…’

Healings? Yes, pain going, arthritis going, neck/shoulder pain – and all down the back – going. One lady, whose hands I held, had had a great pain in her hand exactly where I’d had my thumb: she hadn’t told me about it, but praying for financial provision for her, the pain went, apparently along with all the other pain in her body, which I also didn’t know about. A lot of the prayer for Thanney and me last night was to do with families, finance, relationships – all good, valid, worthwhile, but remarkably ‘unreportable’! There were people healed – to be totally honest, there’s NEVER a meeting where people aren’t healed…. it’s an open heaven, an amazing blessing from the Lord.