It’s wonderful to go to a church with yet another ‘alive’ name – HE LIVES – and go, knowing that the Pastor is excited to see you to tell you of miracles that happened there on the last visit, 2½ years earlier…. It’s a church that opens onto a shopping area, and right beside – literally! – one of the busiest roads in the city (Autopista Simon Bolivar). Maybe the ‘prophetic statement’ that church names are is part of why God does so much here, in Africa, in India, and more….?

Dario was in a top clinic here in November 2014, having had a major burst of a stomach ulcer. Extreme vomiting of blood, the doctors said that he was beyond help, and would be comatose permanently, or die. I remember the moment well, hearing words come out of my mouth saying that ‘you’ll go home tomorrow, Dario’….. he did. The doctors couldn’t believe it, expecting when he did go home, it would be in a coma, preparing to die. 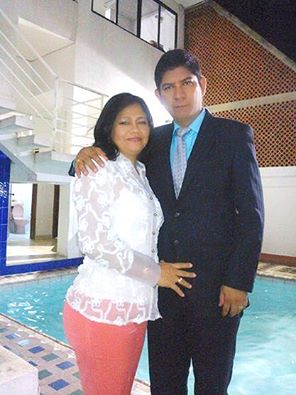 Dario’s testimony is here: not the best recording because of the conditions outside: 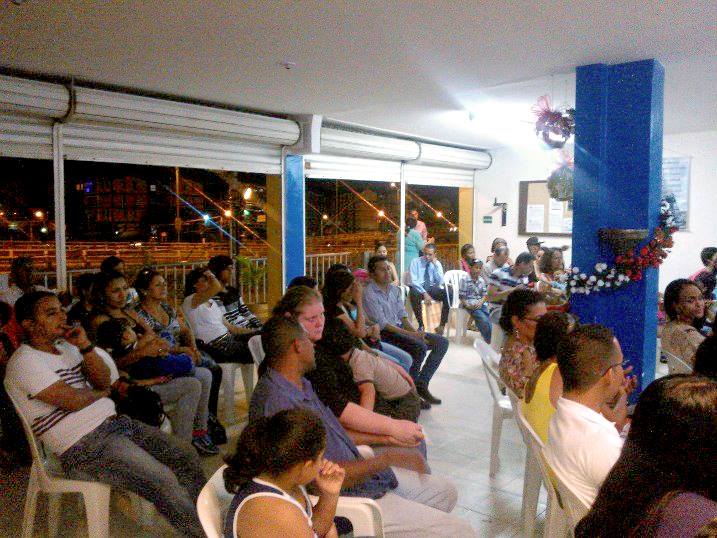 At the same time, in the same hospital, though we weren’t allowed to see him, was Dario and Liliana’s son: suffering from acute Dengue fever, also touch and go if he lived. Prayed for him from next to dad’s bed, and he went home the next day, too….

And so to last night: some of the fastest, rapid-turnover miracles Wilmar – or I, come to that! – have ever seen! First up was a young mum, with her 6 week old son. The little boy had major kidney issues, and couldn’t pee: turns out mum had the same problem. Mum felt the Holy Spirit all over her kidneys, heat in them – no, she didn’t pee on the spot (!! – though I’ve had that happen before, with someone peeing all over my feet!) and the little boy suddenly became active, and crying…. my belief is that he was experiencing exactly what mum was feeling, and I was praying for an extremely wet nappy/diaper by the time she got home….

A lady with osteoarthritis, in great pain, especially knees: was, within 2 minutes, walking across the church, no sign of difficulty, and totally pain-free.

Then Andres, a young man involved in a horrendous car crash, in Spain in 2015. He was in a coma for 45 days, major head trauma, totally smashed left hip, blind in his right eye. The car driver, his friend, was killed outright. I always pray against trauma and shock in accident situations, as those things are used as entry points for the enemy to lock you up crippled, and in memory of the tragedy. Wilmar had his hand on Andres’ left hip, in which he never experienced LESS than 9 out of 10 pain. As  prayed, Wilmar felt his hip moving inside, straightening, and within a couple of minutes, Andres was TOTALLY pain-free, and he felt ‘burning’ behind his eye….. the sight didn’t come back instantly, but as Jesus never ‘part-healed’ anyone, and the fire of the Holy Spirit was there, it will – I’m praying, it’ll be today…. 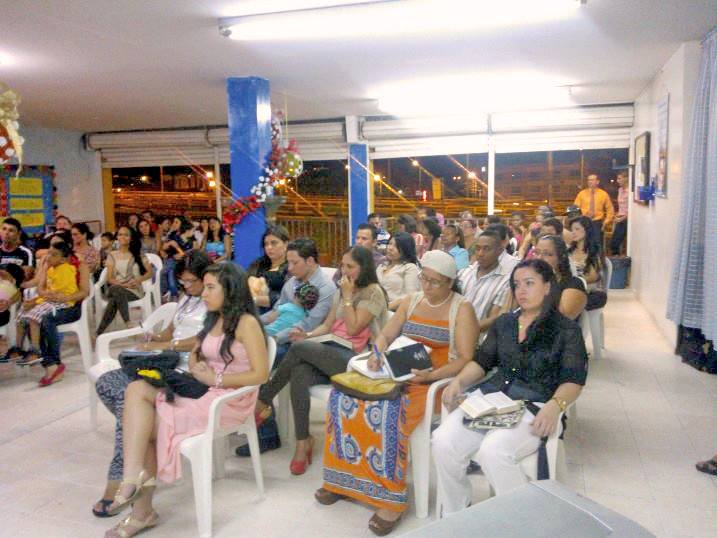 Iglesia Cristiana El Vive – Andres is, I think, the young man directly behind the lady in the orange and blue dress

Another lady with osteoarthritis, head to foot, but especially knees again, was instantly pain-free, and walking – what’ more, squatting, which she hadn’t been able to do for years. Two ladies with kidney problems, one scheduled for fairly imminent surgery, had a ll their pain, ache, and discomfort go.

A young lady with acute spinal pain, affecting her sciatic nerve too, and causing extreme leg pain, was due to have major spinal surgery. Her face, as the pain went, was wonderful – tears and smiles all at one (I ought to take out sponsorship with Kleenex, the number of tissues I get through for other people!!). She’d got two impacted and fused discs, damaged vertebrae, and couldn’t bend. he bent straight afterwards…..

Jennifer, a young lady with gastritis for some time, couldn’t eat, found drinking difficult, suddenly found her tummy on ‘fire’, and the peace of God all over her and her digestive system. And on it went…. I think most people in the church came for prayer, and, no exaggeration – Wilmar and the Pastors would confirm – everyone was healed, or well in process…. wonderful, wonderful God! Right at the end, Liliana, Dario’s wife asked for prayer: major pain BEHIND her left knee, and x-rays had shown cysts on the ligaments and hamstring, which were going to need surgery. The pain went, and the leg moved normally, freely, and pain-free….

It’s 30 months since I was at ‘El Vive’ – another ‘sign’ that God’s doing something special for me here, is that they want me back in July…. like Alcides, from Sunday, and a few other pastors, too…. often, because of the sheer numbers of churches in this wonderful city, sometimes I don’t get to go back to a church for years – like that of Alcides – first time was 2008, then 2014, then March 2017 – and possibly July 2017! There are some churches I ASK specifically to go to where there are wonderful relationships, but it’s not always possible to fit them in….

Tonight, back at a church from November – I can’t remember the church name, but the pastor I do remember…

…. and then Saturday, in a really tough (for that, read dangerous?) district, I think it’s Retiro: I’ve been quite a few times (saw a coupl of guys shot dead on the street there a few years back, from about 400 yards away I love the pastor, Mauricio Naspiran, dearly. Three years  or so back, Mauricio was in a motorbike accident, and his hand was smashed. He’s a passionate worshipper, worship-leader, and very good guitarist. He was told he’d not be able to play again. He leads and plays every week… :). Here’s his video testimony:

and this is him! 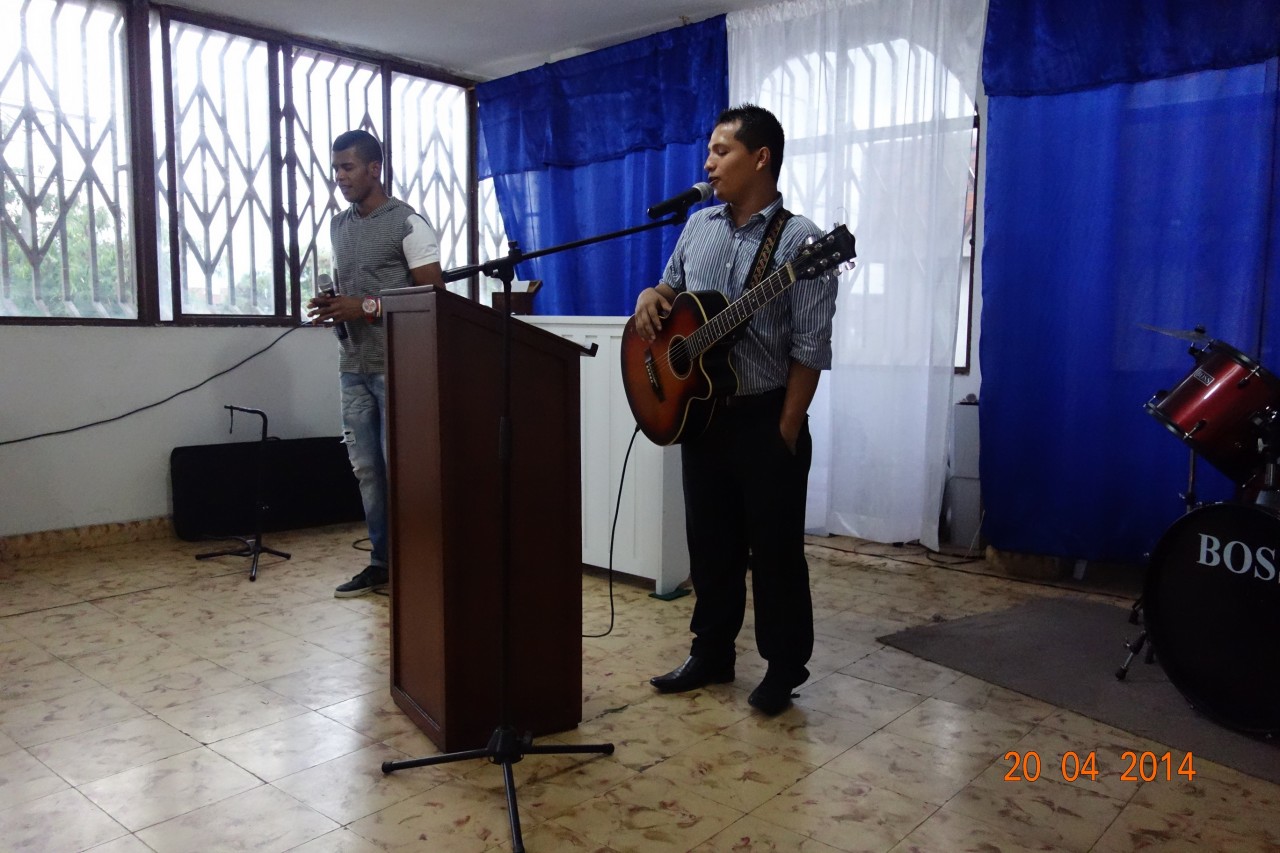 Pastor Mauricio Naspiran, whose totally smashed hand from a motorbike accident, was healed 3 years ago after prayer…a passionate worship leader and guitarist, he was told he’d never play again…