Lots of people tell me they’d love to do what I do: I understand why, because I love it. I went from only visiting Jersey by the time I was 17, and then camping in France and Germany in my twenties. I didn’t like foreign food, was horrified at the thought of eating some of the ‘smells’ from the foreign takeaway food shops – they’d never have passed my lips (as opposed to fish and chips!). I remember walking down Seaside, a street that runs parallel to Eastbourne seafront, and in the 70s was takeaway city! I worked there, and would often hold my nose as I went back to work at lunchtime, especially as I went past the Indian takeaways. I LOVE Indian food now, and pretty hot, too. And from never wanting to travel, God’s taken me to 111 countries, and many of them multiple times. I’m off to Colombia for the 97th time on Sunday!

I occasionally have a day when I want to chill out – and often end up making myself so mad, if sort of defeats the purpose! I’ve been travelling, as an itinerant missionary for just under 40 years, and I LOVE what I do, I have fallen ‘in love’ with just about country I’ve been to. Anyone who travels knows the joys, delights – and the horrors of immigration, sometimes worse than others.

It’s interesting – and this takes me back to the first sentence what makes me mad! – that in the last 10 years, there’s become a television ‘obsession’ with immigration and customs programmes. On any given day, you’ll find programmes about immigrating into  Australia, New Zealand, the Republic of Ireland, The U.K, Canada, and others I’ve missed out. I wonder why? From a frequent traveller’s point of view, I think it’s because the frequent ‘aggression’  and unpleasantness of many of the countries makes good ‘reality’ TV viewing.

Some of you – maybe lots, but there are a lot of new readers of the blog in recent years – will remember an absolutely horrendous situation I found myself in 9 years ago today with such unpleasant, aggressive, arrogant, ‘I’ve a got a uniform and gun’ immigration officers. It was through no fault of my own (tragically it was the problems some church leaders had with money, leaders who wanted to employ me)… I was over the moon as I flew into Philadelphia airport about 5 p.m. though pretty soon I could also see the hand of the enemy in it, trying to ‘set me up’. I’d been upgraded to business class, free, at Heathrow, so I was a happy bunny, and first off the plane: first into Philly immigration hall, plastered everywhere with posters stating ‘We are the face of America’. I really think Homeland Security should consider taking them down, as if most US immigration officers ARE the face of America, my advice is don’t visit America! Then, my temporary place of abode was the USA, so everything I had was in the house. All I had was used boxer shorts, clothes, and very little else! I’ve not been back to the USA since going on the ministry trip (England, Romania, Sweden) that I never returned home from. It’s a dreadful feeling, totally disorientating, and to be taken to the place by two armed immigration officers was awful, humiliating, and I’d done nothing wrong! 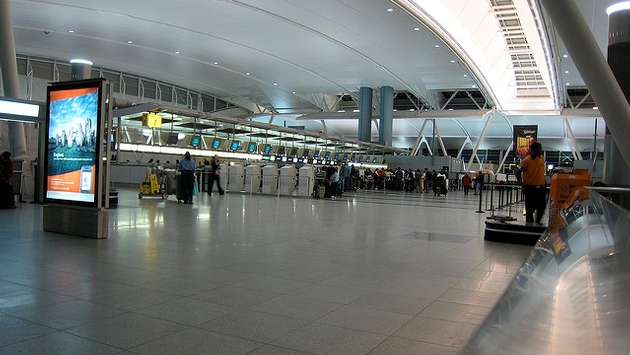 At the first desk, the officer retained my passport, which is disturbing and scary, and then I was ‘handed over’ to a bull-necked ‘gun and uniform’ officer, who was horrendously aggressive, rude, demeaning, – hostile would sum him up well!

There’s often a thought that with people like traffic wardens, traffic cops on speeding duty, are set daily targets for issuing tickets. I felt that evening in Philadelphia, that US immigration officers have targets for the number of people they ‘pull in’ and return to the country they came from. You’re not allowed to speak unless spoken to, can’t use a phone…. the interrogation was equally hostile – except that after about an hour of hostility, there was a change in the officer’s attitude. He told me that he thought they’d ‘over-reacted’ and got it wrong, and needed to talk to his boss. She was infinitely more hostile and ‘chip on the shoulder with a gun’ than my guy had been: she also made me feel very slim!! She flatly refused to reverse the decision – which is where I felt that they had a target! – and 5 hours after landing, I was back on the same plane, dirty clothes and all, on my way back to England! The ‘fight’ with United States customs and immigration took 5 years, and cost round $250,000!!

The difference between the Australian immigration, and the USA, and the Republic of Ireland are like chalk and cheese. The Aussies are – on TV, anyway, and I’ve been there about 15 times, so real life, too! – friendly, chatty, personable (though you can tell from questions that they’re acquiring lots of information!), same with New Zealand. Interestingly, there’s a guy in Dublin (better not mention his name, like with the American one!), who ‘provokes’ the incoming passengers, a real control freak who likes to tell passengers what he thinks they should do!

It’s all so very different now to when I began 40 years ago, and very different to 10 years ago. In the USA, you’re not allowed to crack jokes, or be facetious, or sarcastic – you’ll be arrested! So if you’re going to travel a lot, it’s worth chatting to someone who’s been where you’re going! So yes, travelling is great – IF you’re called to it. There is stress, there are battles, but as long as you know God’s called you – and it’s not just you wanting to do it! –  you get past the battles, and the stress diminishes.