Quite a few of you will know that early in January, I had a ‘statutory’ appointment at a local hospital with an orthopaedic surgeon (hospital regular checkup). It wasn’t the ‘usual’ surgeon, which didn’t bother me – until he did something with my right knee which then – and to this day – I can’t understand what he was doing or trying to achieve. Knees, as I’m sure you know (!) are designed to bend backwards and forwards: this doctor took hold of the sole of my right foot (quite hard), and pushed his left hand against the side of my right knee – and then proceeded to pull my foot hard towards him, and push my knee hard away from him. The bone-cracking noises were awful: the pain so unbelievable I wanted to scream. The pain in them is strong enough anyway without this doctor’s action. I have to confess that I said to him, when I could breathe again, that if he did the same to my left leg, that he might have to be prepared for a broken nose…. When I put my right leg down on the floor, I knew I wasn’t going to be able to stand on it, let alone walk: in fact, I couldn’t walk at all for the next 4 days, even going from my living room to my kitchen (about 15 feet/ 5 metres) on my stomach, rather like a snake….

And the truth is, 6 months on, I can still hardly walk: I’ve forced myself to walk, to do some meetings, and in May, I went to Colombia. I knew it would be difficult, and knew I’d have to walk a fair bit, so I swallowed my pride and rented a wheelchair, the first time I’ve ever had to go down that route. It feels as though the doctor has permanently damaged my right knee. I know that there are many who’ll tell me to have the knees replaced, but there’s a 2- 2½ year waiting list, so I don’t have anything to gain by just saying ‘put me on the list’ – until God intervenes and heals them.

I should, in fact, have gone to Colombia again yesterday, Friday, as the May trip was to find a property for Thanney to convert/renovate as another street kids house. A good house was found, but something else happened during the May trip that wisdom told me would make it unwise to go….  🙁

One morning early in the trip, I was due to go to see a doctor I know for steroid injections into the knees, to ease the pain and make walking – and standing up, to preach. My legs felt ‘odd’ and when I looked at them, it appeared that someone had stood me up to my thighs in a bath of beetroot juice! And boy, were they sore! My legs swelled up, and swollen knees that already struggled to bend was not helpful. The picture below was about 50% of the inflammation of that first morning: the caption and picture were posted by the lovely Christian dentist/Pastor, Ana Lucia Arbelaez. Rightly, the orthopaedic doctor wouldn’t pump my with steroid, as he didn’t know what was wrong with my legs.

I was recommended to see a doctor – who it turned out I knew(!) – a pastor and a doctor, a medical doctor and a naturopath, Gustavo Escobar. I’ve preached in his church, but not for about 10 years: he’s a great doctor, even better, he’s great fun! One look at my legs, and he’d diagnosed chronic cellulitis – a bacterial skin infection that can be very serious. Seems it can become sepsis: and causes circulation problems – blocked veins, and – it seems – I have acquired a blocked artery in my heart. So with long-haul flying being a cause of deep vein thrombosis, much as it ‘hurt’ not to go to Colombia, wisdom told me not to take on a 10 hour flight, even though on this trip I’d have had some assistance walking or in a wheelchair from Thanney. The enemy nagged away at me saying God will look after you’ – yes, I know he can, but he’s also given me wisdom, and the doctor suggested I’d made a good decision!

I won’t deny it was hard when giving Thanney a final hug as we said goodbye! I would ask for your prayers for total healing – not just for the cellulitis, but with a 2½ year waiting list for replacement knee surgery (which I’ve never felt right about having anyway, if I’m honest) I believe that God IS going to heal the knees. Today I had two ‘words’ from very dear spiritual friends: I’d posted a quote on Facebook – ‘If you can’t see it before you see it, you’ll never see it’ – and these friends, Brian Louden and Rene Martal, unconnected with each other (in fact in different countries – England and France, responded: Brian ( (PS – I’ve “seen” you with healed knees). Be healed.) and Rene (That’s strange Paul, I had the same vision of your healed knees this morning ! I don’t know how, but I think something good will take place) so – what the enemy means for harm, God means for good!

The inflammation IS going down, and I’m asking God to heal them – knees and cellulitis – by the time Thanney comes home on 31 July! And for the veins and arteries to be completely clear, too….. 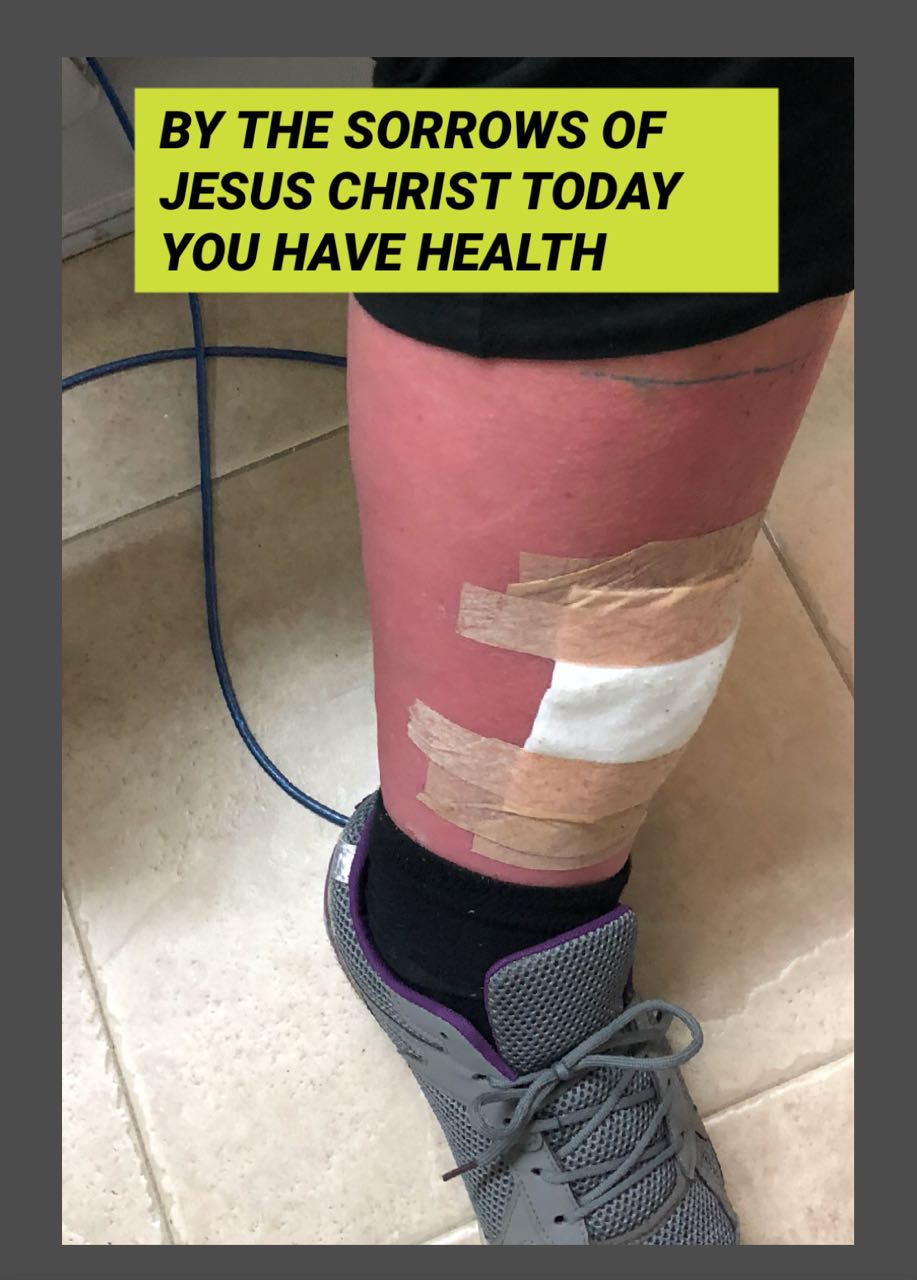 « THE JOY OF RESCUING STREET CHILDREN & A NEW HOUSE FOR THEM!!
Prayer for healing – for me! »