It’s probably crazy to sit down and try to write a blog at midnight after a totally exhausting evening, but the post last night ha so much good stuff to report, but I missed a lot ‘cos I was tired!

Wilmer Albeiro Murillo Ramirez we are really surprised and grateful for God’s presence in our church tonight, and being able to share with you this time. We were very edified and blessed. We saw God healing people and manifesting a supernatural way. Thank God for their lives.

It’s terrific when the pastor responds to confirm the presence of God, and the miracles! I’ve said before that I’m very conscious that some people ‘imply’ that these stories are made up, fictional, or at best, exaggerated. I can promise you they’re not!

A lady – young-ish – had terrible problems with her stomach, bowel, and womb: was in intense pain, and was healed in seconds. So many have stomach disorders here, I guess the poverty dictates diet, even eating times, so to see them healed is such blessing. One lady, beginning with migraines at the top of her body, and ending with numb toes the other end, arrived for prayer, hunched up with pain. Within moments, she was lifting and turning her head from side to side, stretching neck muscles, raising her arms, and walked away pain-free….

There’s an English ‘good friend of a good friend’ who’d come to Cali to visit a friend of his who’s lived here for 12 years, but also, having heard me speak in England, and knowing my great mate, Mark Hendley, from Maidstone, was in a place where he’d just found his faith had waned somewhat, having evangelised many times on the streets of Brixton, South London, with no success, and having never seen – personally – anyone healed. He was with me on Sunday, and then he spent the next 3 days with pastor friends, including my friend Francisco: yesterday afternoon, in a public park, opposite the church, he, the Pastor, and a lovely young lady, Linda (a local whose English is as good as her Spanish!), they saw at least 25 people give their lives to the Lord, and then last night, Jon saw the paralysed walk, the crippled jumping and laughing, a stroke victim get out of his wheelchair… so I think Jon’s rather glad he came!

The wheelchair man, like I said in my blog last night, was called Alfredo, who’d had a stroke years before, and, it seemed, just looking at him, that he’d given up hope. I told him about Jose, in Sweden, a few years back (re-told that story in a blog a few weeks ago). I did with Alfredo what I’d done with Jose: asked him, ‘Do you WANT to get out of your wheelchair?’ (some don’t!), and ‘What do you want God to do for you?’. I didn’t pray for him, just provoked his spirit: he said he wanted to walk, so I told him ‘Get up then!’. And he did. Then he walked, albeit slowly at first, across to Jon, then back to Fernando, then back to Jon, and then out of the church. He left the wheelchair at the front…

I was chatting with Alan this morning: saying that, even after all these years, and having seen tens of thousands healed, it still amazes me. I EXPECT it, but I’m still utterly in awe of what God does, and what he can do. I think that, if the day ever comes when 1) I’m not nervous before a meeting, and 2) not in awe of even cold being healed, that’ll be the day I don’t do this anymore. As far as I know, I’m nowhere near that day yet!!!

Yesterday afternoon, for some reason I was ‘dog-tired’. In fact, Alan had to wake me 10 minutes before I was due to be collected to go to church. On my way out, I said to him, ‘I feel so NOT like going to meeting tonight, this one must be a corker!’ It was. A living testimony, to me, at least, of God’s strength being made perfect in my weakness.

Alan & Barbara remembered the name of the church they were in, too: Iglesia Cristiana Integral. (No, I have no idea how that translates, either!). The pastor, another Diego, Diego Fernando Vivas, and his wife, Maria Fernanda Julio de Vivas, gave them the ‘floor’ so to speak, and EVERYONE got prayed for, with Alan’s ‘becoming legendary heat’ passing from him to them! As Barbara was massive healed from chronic osteoarthritic knees over 5 years ago, she got her hands on all the arthritics: I just know there’ll be some testimonies back from there.

This morning, A&B have gone off to speak at a women’s meeting, in the home of the CEO of Johnson & Johnson (wonder if they’ll get any promo samples??!) – Barbara to speak, and Alan to be her encourager, AND pray for the 17 year old son, who is autistic….

And then, later, ANA BEIBA!! Taking Barbara and Jon there for their first visits, it’ll be wonderful to see her….and her amazing home for the abandoned old people of this lovely city. 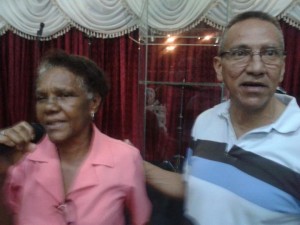 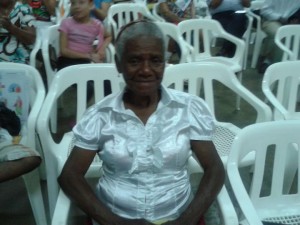 Rosa, I think! – crippled with arthritis, unable to walk, taking it easy after jumping, walking, and even a little salsa…

« The blind see, the lame walk, the wheelchair-bound get up & walk out of the church…. we have lift off…!
Ana Beiba & her home for abandoned old people »