Tonight, Alan & Barbara were in a church way down in the south – it’s funny sometimes, because you go to places, and you have no idea where you are, and, sometimes, no idea who you’re with, as they speak so fast in Spanish: Alan’s and my Spanish isn’t bad, but you can only ask someone 2-3 times what there name is without it becoming embarrassing! They had a great evening, nonetheless! Everybody responded for prayer, from hernias, arthritis (Barbara prayed for them, having been miracled in that respect herself!) – all felt Alan’s ‘usual’ intense heat, which generally, with him, means that they were healed.

I was in a barrio – Guaval – I have no idea where it is, but with a church whose Pastor I met in April – the church is ‘Rivers of Living Water’ (Rios de Agua Vida), and Wilmar Albeiro Ramirez (a different Wilmar to the other one!) and his wife pastor it. My first time there, but felt at home as I’d at least met the pastor, and my old mate Fernando Sanchez translated for me, and Jon from England, was there. 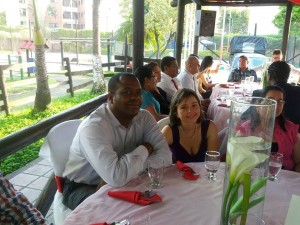 Wilmar, the Pastor, and his wife

It was an amazing night….everyone was healed: I don’t remember all the names, but one lady, Asaila, had chronic arthritis, chronic back pain, and bent knarled fingers. All her pain went, her fingers straightened…. and named Marleni, in much pain, osteoarthritis, and 90% blind in her left eye (her retina had ripped, the docs/opthamologists said nothing could bedone, especially as she was 67, and too old to worry about, I guess!). All her pain went. I spoke to her eye – and, over a 2-3 minute period, her sight was restored totally, and she testified from the front to the whole church. I took both those ladies pictures on a different phone, which doesn’t seem to want to connect to my laptop… 🙁 – so I’ll have to have a fiddle with it!

A guy, I think his name was Alfredo, stroke victim, paralysed left hand side, in a wheelchair – got out of his wheelchair and walked out of the church. Another lady, Rosa I think, was completely crippled in both legs, completely wrecked knees, in intense pain, and desperate for many, many years – walked, jumped, and started to do a dance move or two! Both her knees were healed, of course, and another lady’s knees were healed. Needless to say, mine are suffering from using them a lot tonight, but my time is coming….but I can honestly say that, if my knees getting healed meant I had to sacrifice seeing what God did tonight, I’d stay in pain, I really, really would….

What more can I say? I was blown away to discover that the last month, the Pastor, Wilmar, had been preaching to his church on having the authority of Jesus, the power of Jesus and more – so it was great to find out afterwards that I’d said pretty much the same things this evening in my preachy bit. Prayed for dozens – all healed… so, so wonderful, and it’s such a blessing to see God do such stuff through you….