15 or more years ago, Cali featured in a video called ‘Transformations’, about a ‘revival’ that was happening here. Truth is, it wasn’t a revival. What was happening was that the foundations for revival were being dug, and calling it a revival seemed to have a negative effect on what was going on. It’s dangerous to call something it isn’t as though it is….From that point, it began to ‘fizzle’ out.

Then, about 10 years ago, God began to pour out his blessing on the nation, and with successive presidents, there has been a major ‘up-turn’, and those of you who have had the misfortune (!) to hear me speak, will know that I frequently refer to Cali as a city ‘under an open heaven’. It has always been that for me, as regular readers of the blog will know. Tonight, we were under an open heaven, in thee wonderful church ‘Nacer de Nuevo’ (New Birth) in one of the city’s most ‘dangerous’ barrios, Simon Bolivar. If you’ve followed my travels and ramblings for a few years, you’ll know how often I refer to this church, and their wonderful Pastors, dear friends Hernán & Helchie (Aida) Gonzalez. Tonight was an open heaven. And what was lovely for me is that I took no part in the meeting, save to introduce Brian and Paul. It has become so, so fulfilling for me to ‘open doors’ for other people to get the chance to do things they might not have too much opportunity to do back home. Of course I still love to do ‘do the stuff’ , as John Wimber so wonderfully described it 30 years ago. Of course, I’m always nervous before I do: but nerves go pretty quickly once the microphone is in your hand and you’re relying on God to speak through you. It takes so much stress out of it!

Brian shared what God had put on his heart very well, having greeted the church in Spanish, which always brings a cheer – especially in a broad Scottish brogue! Paul preached excellently, and 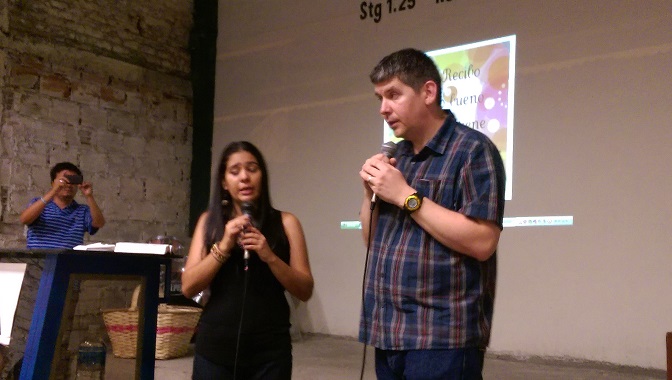 then handled the move of God so well at the end. People stood to receive a fresh infilling of the Holy Spirit – Paul had spoken on the verse in Ephesians ‘Go on being filled with the Holy Spirit. We had an ‘unknown quantity’ too, in that the church had provided translators who I didn’t know (sometimes a bit of a risk!!), and more, who didn’t know our voices, or possibly even know English (Paul and me) and Scottish (Brian) accents. But they were great, especially a brilliant young lady, Maria Paula Londono (perhaps the key is in he surname!!). She was excellent, accurate, fast. And she was thrilled to meet us, and offered her services whenever needed.

Personally, I felt that Paul needed to ‘direct’ the whole ministry time, which he did, I just threw in my pennyworth here and there. People who were sick stood, and rather than the ‘usual’ chairs at the front with us doing the praying, Paul got them to pray for each other. 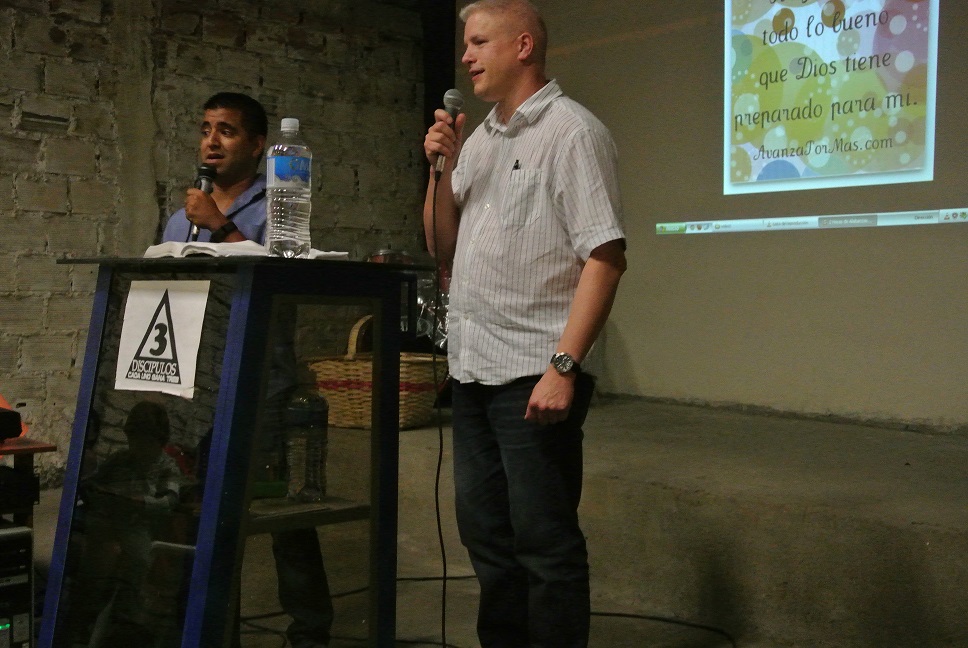 Testimony after testimony followed. I recorded some of them, and they can be seen here:

A lovely lady with a damaged shoulder from a fall, healed as the people around her prayed for her. Another lady, with a septic very large dog bite on her leg – healed. If you can, watch the video – it ain’t too long!! Paul, again, handled the whole meeting so well. A lady healed tonight (she’s on the video) told, too, of my praying for her last year, when she had awful, painful bunions (I know they’re painful: my knees have knocked my feet out of place and shifted both my metatarsals so much I have to buy shoes two sizes too big… I love poking Satan in the eyes and kneeing him in the …er… (!) as he goes down…when God heals someone of something I’m suffering from!! This lady, Maria, has perfectly normal feet now… thank you, God!!!! You’re wonderful! Here’s her story –

A lovely Pastor in a wheelchair had both hips and knees out of alignment, with muscle spasms that were very painful. Here’s his story:

This has to be one of my favoured churches in Cali. So many miracles have happened there in the 5 years I’ve had the blessing of knowing Hernán & Aida. One of the loveliest was 18 months ago, with a lovely young lady, Daniella. I’ve often told her story, of how she came to a meeting, in November 2013, in the middle of a huge and scary asthma attack: but came to church for God to heal her. He did – instantly. When she stood in front of me, she couldn’t speak at first, so great were her problems breathing. I just said to her, ‘I can see what’s up, don’t try and talk’ – and in seconds the asthma had gone. It is STILL gone, 18 months on. She also had a dreadful hereditary eye disease: opthamologists had told her she’d be blind by the time she was 20. Thick, thick glasses, no distance sight at all beyond about 5 metres. 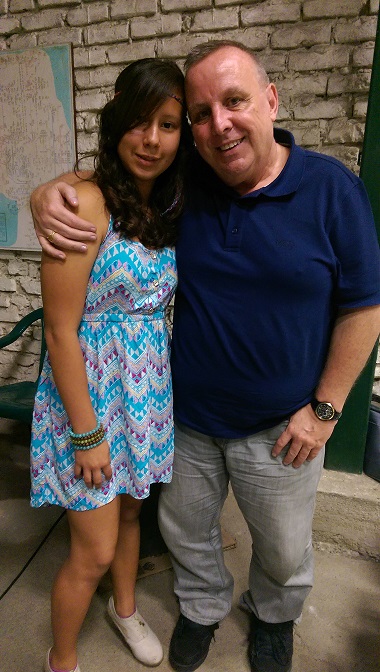 Moments later, I suggested she took off her glasses and read the notice on the wall at the back of the church, about 20 metres away. She did, and promptly gave her glasses to her mum! She’s never worn them since. I asked her – as God clearly wanted to bless her that evening! – if there was anything else wrong. Yes: born with severely flat feet, special shoes (so nothing ‘trendy’ for her, poor girl), and couldn’t really do anything in terms of sport. I asked her to sit on the platform and take her boots off. As she did, we watched the arches go into place, at which point she exploded in tears…. tonight, in trendy shoes, no glasses, and breathing normally, I got her to tell her story on video… it’s beautiful! Every tie I’ve been back to the church since, I get Daniella to pray for people with me. Everyone she’s prayed for gets healed, including her mum of the same eye disease, and her dad! She’s such a lovely young lady, blessed outrageously by God from head to toe, literally. Her story is here:

Many people from last week’s meeting at this church came to tell me that they still had their healing, including the lovely Julianna, who you might remember, had no voice, and in telling me after prayer that she’d ‘felt nothing’ said it with her voice fully restored: and Wilter, who’d had the bad tendon damage in his hand, publicly testified from the front of the church that his hand has been perfect, and pain- free ever since.

Dozens filled, or refilled, with the Holy Spirit. Dozens healed. Old friendships consolidated and grown: new friendships developed. A great new, willing, excellent translator to work with me and the people I bring with me. And the power of God cut loose in an already wonderful church, which, of course, is the most wonderful thing that can ever be experienced…. 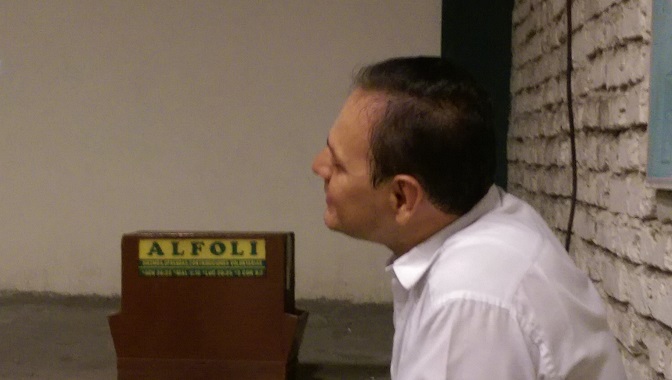 Hernán & Aida’s church is in a barrio where there is a large concentration of gangs, with a large number of the ‘$20-50’ killers living there. He invited many to the meeting, but they didn’t come…. SO, I suggested to him that, in July, instead of inviting THEM to US, onto ‘strange territory’ for them (church), why not us go to them? Hernán got so thrilled at this idea that he’s going to arrange a meeting – meetings, even – on the street, to which they’ll be invited. It will be dangerous, sure: but in the recent past they have asked him to let them know when the ‘gringoes’ (us!) are going to be there, as they have people they want healed….but these guys need to see the Power of God, they need to be introduced to the Father who loves them, and be given the opportunity to hear – and see a demonstration of – the gospel. a demonstration that Jesus and his Father love them, no matter what…

This picture is just a ‘fun’ one really! – it’s a mountain ‘bus’ for the villages much higher and less accessible in the Andes, on the edge of Cali. This one was a short-wheel base jeep, and we watched at least 20 – maybe 25 – people get into it and on to it! That, and a family of 5 – dad, mum, three kids – on a 125cc motorbike are two the memorable and frequent sights in Cali! 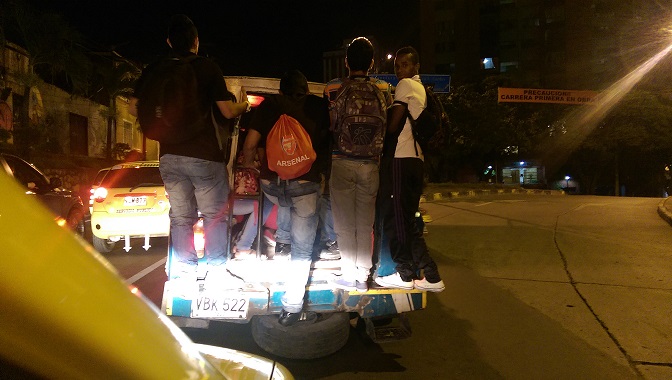 Paul, as a driving instructor in ‘real’ life back in England, held his hands over his eyes for some his early forays through Cali, in taxis! – but now he’s getting used to it! By the way, if you live around Bexleyheath, London, and want to learn to drive, you’ll not find a nicer or better driving instructor! Already Paul is talking about coming back here – and he hasn’t even left yet!