After a relatively ‘easy’ day – much needed – we were off to a church where, last July, many miracles happened: ‘Casa Berea’ in the city of Yumbo. Tonight was every bit as mind-blowing as last July! Only my second visit to the church, yet greeted like a long-lost friend when I arrived with Paul, Brian, and Diego. The Presence of God was there, and it’s not too difficult to preach in that sort of atmosphere. Initially, it was going to involve contributions from all of us. But as Brian shared – very well, I might add – I felt that I should just let him and Paul ‘run’ with the meeting. Paul again spoke really, really well. Many stood to ask God for a fresh infilling of the Holy Spirit, and people were healed as they prayed for each other, having had a touch from God. 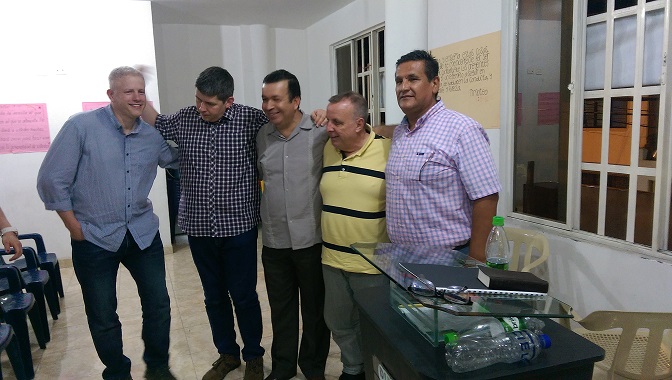 There were still hordes to pray for: apart from a very few things you can’t ‘see’ or know are healed – like cancer, diabetes, etc., – everyone was healed. Brian had a word from God about damaged hips: he saw 4 healed, I had two more. Multifarious pains went, Paul had someone – like Carly Brown, last year – healed of Parkinson’s disease, another lady with displaced discs in her back, who spent the next little while touching her toes! – I had a lovely elderly lady, Nina, crippled with arthritis, especially bad in her shoulders and hips, but with an excruciating problem that probably helped me make a decision I’d already made anyway! – she’d got arthritis in her left knee, but was in extreme pain in her right knee, where she’d had a knee replacement… in more pain now than at any time during her ‘arthritic’ right knee days. God took away ALL of her pain, including in the prosthetic knee. Seems a little pointless to me to have your knee replaced to have MORE pain than before, virtually all of the people I know who have had that surgery, have regretted it.

At the end, the Pastor, Alex, wanted to interview each of us for their radio programme. After he’d done that with me, he spoke prophetically to me about my involvement and its importance in Cali, Yumbo, and Colombia: it blew me away to be honest. Then his sister did the same – prophesied over me about my future here. It’s wonderful to have such confirmation, especially as the build-up to this trip was so fraught with problems. Maybe that’s why…

A lovely guy, James (Hames, as in Rodriguez, the top World Cup footballer) had wrecked his left knee playing football – ripped his meniscus and anterior cruciate ligament (those parts of my knees are floating about somewhere at the back of my knee!). Five surgeries later, in more pain than ever…I love hitting the enemy back with healed knees to ‘throw in his face’. James was totally healed, all pain gone, many movements of his leg tried and proving good. Such a blessing, such a lovely guy. I got him to pray for mine! Here’s his story:

More stories to follow tomorrow, when I get the guys to remind me what they saw God do! And a 6.30 am start for church in the morning for Paul and me… 🙁 – God, wake us up fresh, and rarin to go, please!!

« And the heavens opened
The best just got better… »