It’s so hard to ‘document’ a day like it. It sounds quite clinical to say we were with a wonderful team who feed street people, in Ana Beiba’s incredible home, and then in a church. Clinical is the LAST thing it was. There’s a part of the city called La Isla (The Island – sounds nice, eh?) where thee is a large community of street people. Every week, a lovely lady, Ana Bustos, takes food to them, and when I’m here and whoever’s with me, we go to be with her and talk with, and pray for, the people there. It’s a place of tragic lost lives, lost hope, and nothingness…. As soon as we got there, Ana asked for me to pray for a young man, David (pronounced Dav-id here): young but a long-time cocaine/crack addict, eyes completely dead, a wrecked life. I told him how much Jesus loved him, that to Jesus his past and his present meant nothing, and that from here, he just wants to transform your life… he prayed quietly: and as I prayed for him, with my gang of 3, his eyes changed, his demeanour lifted, the burden went off of his shoulders – at least for now. Please pray for him, that having asked forgiveness, he’ll walk free from now on. He looked better still by the 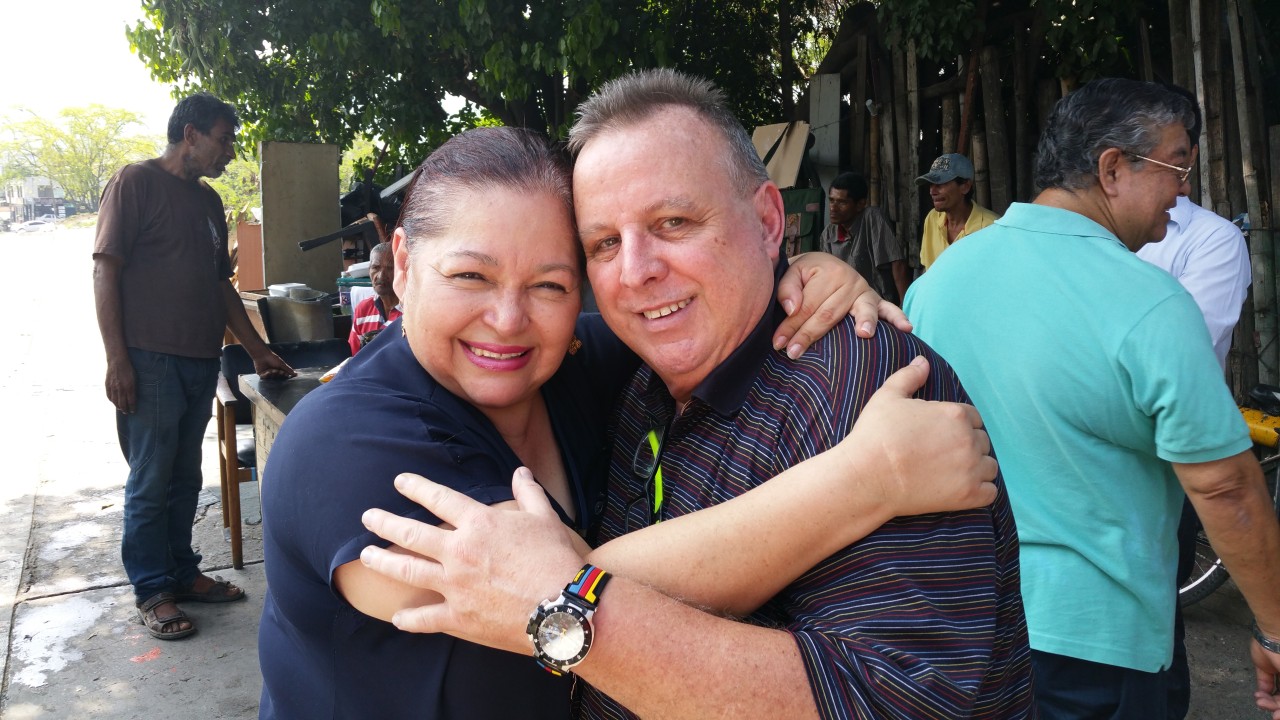 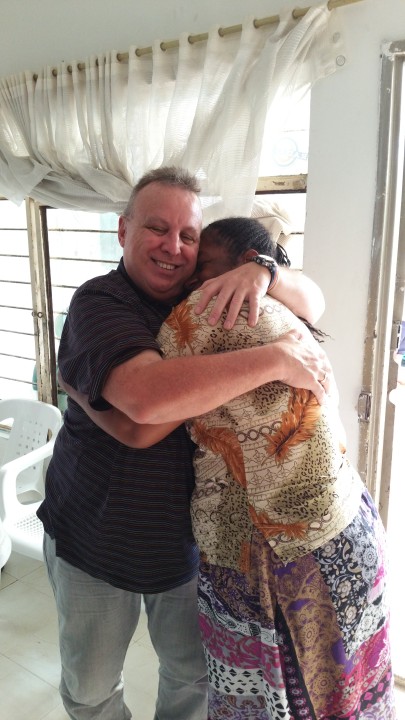 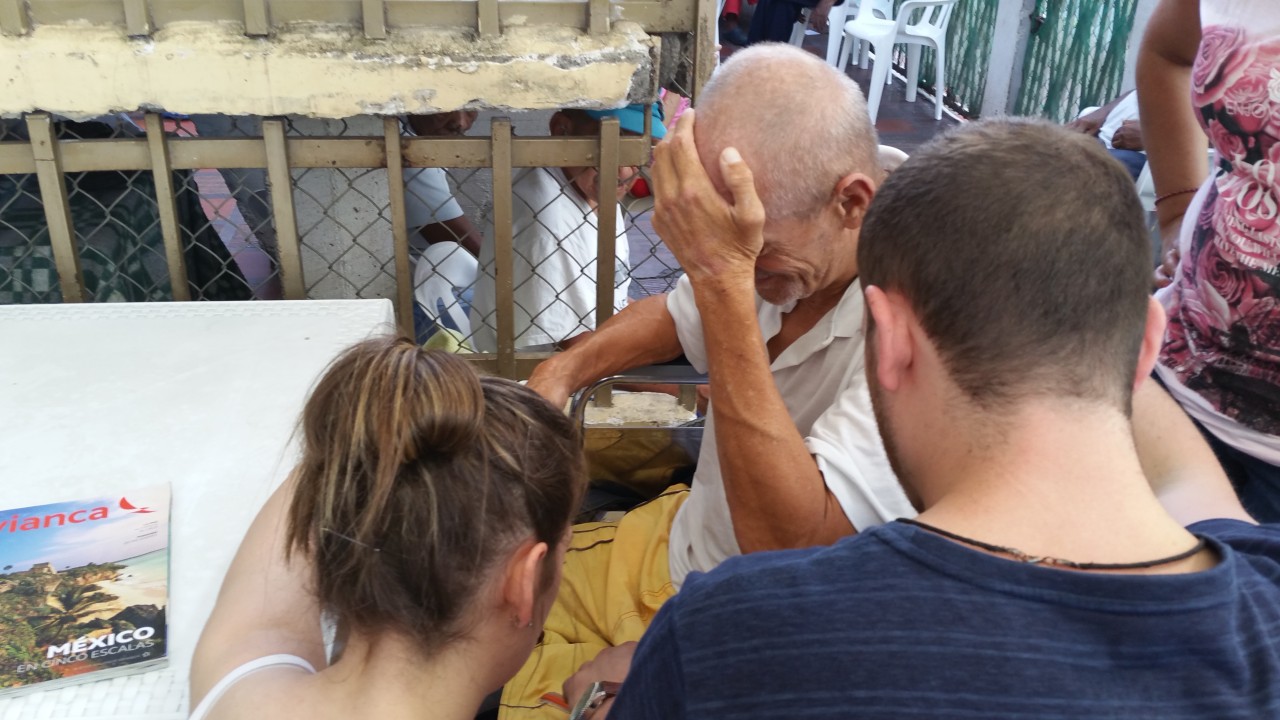 Then a lovely (quite emaciated) man, Javier: he’d been brutally beaten up, taking many punches to his chest that had hurt his heart and affected his lungs. God took away the pain, and his breathing became easy. Thank you, Jesus, that you love these people. Then Ernesto: he’d lived in the States for 30 years, the last 13 in Rikers Island prison,  one of the worst. He’d been a Christian early in life, but fell away: back in Cali 10 years since being deported from the States. Desperate to get out of the life that he’d been locked in. We talked for quite some time, and I prayed with him, he prayed too, and asked God for forgiveness, and hope came back to his face and eyes…. It’s so tragic: for many people here, there’s no alternative. You’re born into a life of crime: getting out isn’t an option, humanly. I’ll be praying for Ernesto every day. The others on my team talked and prayed with other guys there. 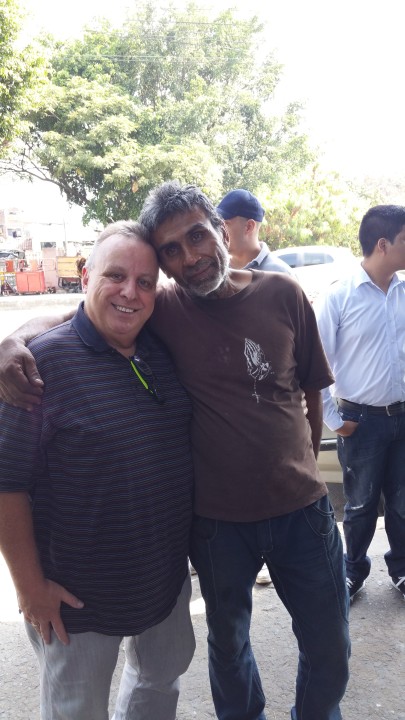 This lovely man, Ernesto, sleeps on the street at La Isla 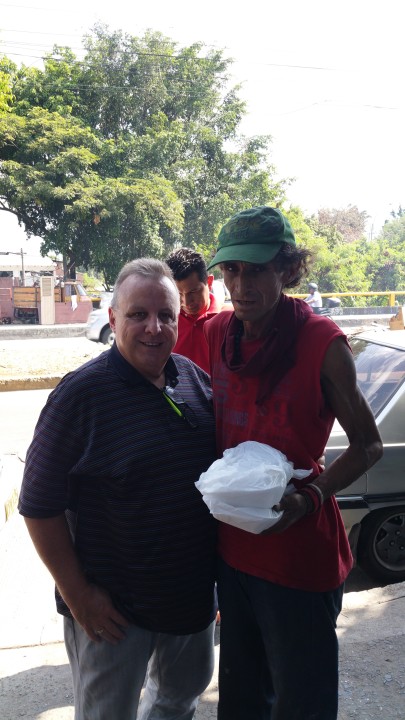 Javier, a street sleeper, who was healed having been brutally beaten up 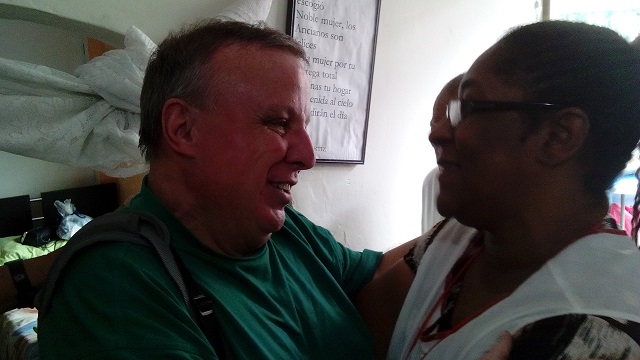 Ana Beiba and a gringo

Then to the delightful, amazing Ana Beiba. From one ‘heart and soul stretching’ place to another. Ana’s got over 100 with her now: ‘would have been’ lost souls, too, but for her amazing ministry of taking sick, infirm, desperate old folk off of the streets. We spent quite some time with her and her ‘babies’: Peter, Kerry, and Caroline prayed for some, I prayed for some. Pete felt he just HAD to go and pray for one lovely man, Gerardo, who’d got no legs. Bless him and Kerry for praying, believing in faith: were asking God that he woke up this morning with new legs…

It’s impossible to communicate in written words – and spoken words, come to that – just what it does to you inside, emotionally. But I’m so honoured to have the opportunity from God to spend time and energy in being in these places.

A short 30 minute break, then to the lovely church ‘Oasis de Restauracion’, in a very dangerous district, Los Lagos (The Lakes). The church was packed, we all spoke, and then came the tsunami of people for prayer. Right now I can really only tell you what happened with the folk I prayed with: I’m still waiting to hear from the others! Kerry did say in the car on the way home that she’d prayed for a 20 month old baby whose feet pointed in severely, so much that she couldn’t really walk properly, or run, or jump. The feet straightened immediately, and then she wouldn’t stop jumping….

First up for Wilmar and me was a lovely lady, Marta. Chronic, unending headache for four years – as her story unfolded, it was a tumour at the back of her head, too dangerous-a-place to operate, so the doctors could do nothing for her. Her pain stopped instantly – which would seem to suggest that the tumour had shrunk, or gone…. her face was a picture… A lady with pain in her bladder, a UTI, severe stomach pain – completely healed. Diego, a man clearly in severe pain from looking at his face – 9 years suffering with the intense joint pain from the disease ‘given’ to you here by mosquitoes, chicunguñia. He’d had surgery on his arm, too, where someone had stabbed him in the upper arm, severing the main muscle. After been prayed for, he was laughing with amazement as all his pain had gone, he could, once more, close his hand to a fist, and move his arm behind his back almost up to touching his shoulder…

Many, many more… just a last one for now. A young man, Daniel, about 15 years old: his brother had been shot dead 7 years ago, the gang that killed him had tried to kill Daniel. He asked for prayer as he couldn’t live with the rage and anger inside him, and the desperation for revenge. Wilmar led him in a pray of committing his life to Jesus: I prayed for the fear, trauma, shock, anger, and rage to broken off of his life. The transformation was amazing. He SMILED – something he’d not done since his brother died…

We prayed, too, for Wilson and Luz, the pastors of this lovely church – one of my favourites here – as they’ve been under incredible enemy attack. Wilson is a key pastor in this wonderful, troubled city: a ‘mover and shaker’ for the Kingdom. He’d been subjected to panic attacks, irrational fear, and many physical assaults from the enemy. The peace of God descended on them both as God touched them, and blessed them…

By the time we got home (having been told by the pastors NOT to drive to the end of the road to come home as it was far too dangerous! – but to reverse out) we were all totally exhausted. emotionally wrecked, but blessed beyond anything you could put in words…. 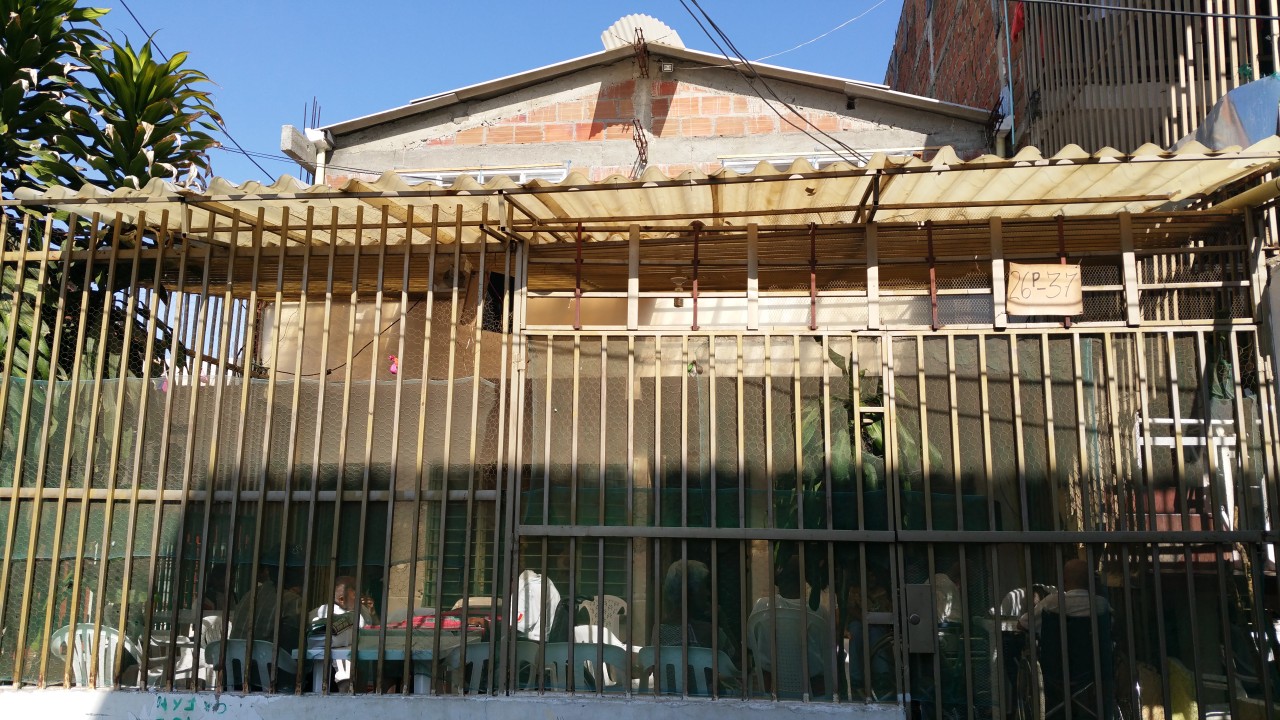 « Reunion of many friends
Wow….just wow: and the ultimate redemption »