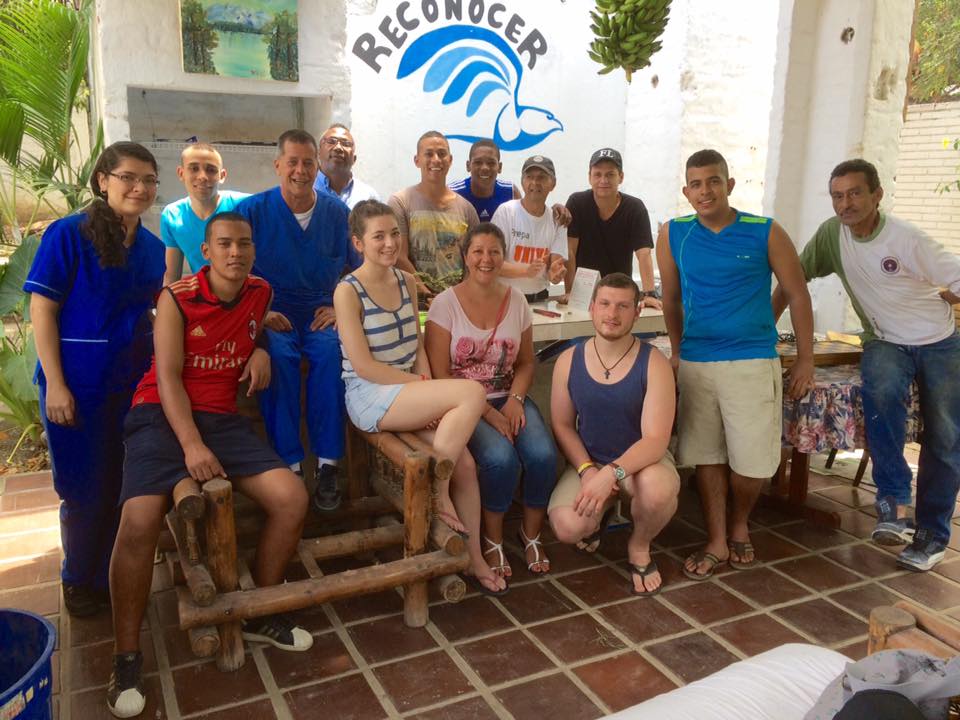 Staff and some residents from Reconocer, and my team

Yesterday morning, the guys went to one of my favourite places, Reconocer (to recognise), the Christian drug rehabilitation centre here in Cali. The ‘ultimate redemption’ (regular readers will know this) is that the house was formerly owned by the Rodriguez brothers, the second biggest Colombian drugs cartel – not just in Colombia’s history, but in history….now redeemed to rescue addicts from their self-inflicted prisons (but often they’re born into it, and have no choice). Enrique Leal runs it: it’s a wonderful place, tough for the ‘residents’ of course, but incredibly effective. I didn’t go with the team yesterday, partly because they were going to do a ‘fun’ morning, with games, etc – and my knees objected violently to that idea!! 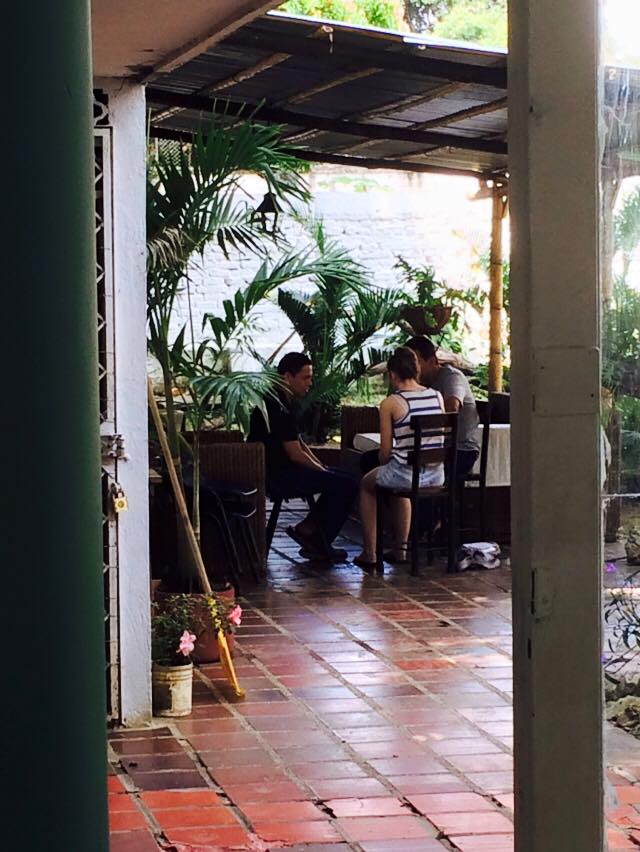 Reconocer – Kerry praying with some residents 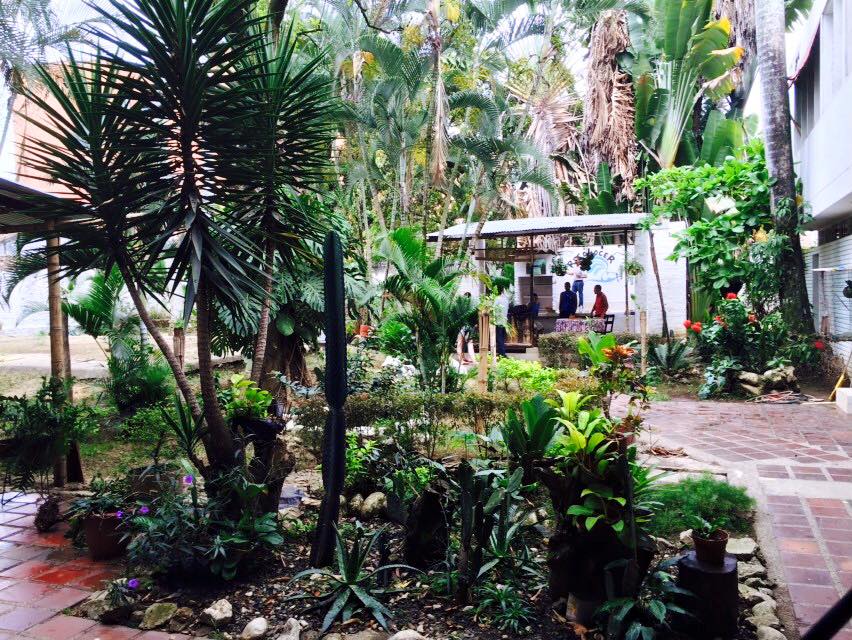 Caroline, Peter, and Kerry came back absolutely over the moon, as they had a chance to pray for all the residents (as always) but this time, two of the ‘new boys’ (as Jackie Pullinger-To always called her fresh intake) gave their lives to the Lord…. ultimate ULTIMATE redemption!

They were there over four hours, and we’re back there again tomorrow (Sunday) for lunch with them, and to speak to,  and pray for them all again.

Last night was with a small home-group from dear friends’ Francisco and Ninny’s church, Nueva Vision, in the city of Jamundi, some 90 minutes south of central Cali. The journey was fun – we left at rush hour! – and it took what seemed forever, but that was soon forgotten as a good number of folk came – a number which we were all convinced doubled when it came time to pray for them!

Caro and Kerry prayed together: first for Monica, who had terrible difficulty walking since a motorbike accident, severe damage to her ankle, and knee, and to her wrist and little finger, which she couldn’t move. EVERYTHING was healed… she walked backwards ad forwards, rotated her wrist, clenched her fist including bending the little finger… God’s flipping good!!!!

Alirio had pain in both knees – ran without pain…. Alexandra, pain in her wrists – healed: and much emotional pain went. She said she ‘felt free now’…. a girl, Lili Marlen (great name, eh – someone ought to write a song about her 😉 ) – one leg shorter than the other, gave her back and leg pain: leg grew. Well, back got into place, most likely, but still a skeletal miracle…. Derly Maria had had/still got cancer in her lungs, and with pain in her hands. No longer any trouble breathing, pain in her hands gone. Gerardo, with hearing at about 2 out of 10: prayer – 5 out of 10 – more prayer 7 out of 10, and by this morning… 10?? 🙂

Rosa, long term arm/shoulder pain – many years, further damaged by failed surgery, and pain added to by the perishing mosquito that gives that awful disease, chichunguña, which attacks every joint with extreme pain, and the bones, too. She could only lift her arm a few inches… until God did his stuff, all the pain went, and she could lift it right about her shoulder, with no pain….

Elisabeth, 18 years of major spinal pain through herniated discs, again further damaged by surgery. A lovely, lovely lady, who couldn’t even get out of a chair with no pain, but is  wonderful worker in the kingdom, a real servant heart, who loves people… all her pain went, after 18 years of living with it. A delightful man, Carlos, in deep, deep emotional pain, as his wife of 50 years died four months ago: she’d been given a heart transplant 2 years ago, that had been remarkably successful, but antibiotics given to her had done damage to her kidneys…. in trying to rectify THAT damage, the medication given to her attacked her heart, which began to shrink…ultimately taking her to be with the Lord in March. Carlos wept as we prayed: other issues in his family had exacerbated his pain, but the peace of Jesus just consumed him, and I felt that God wanted to give him ‘permission. and freedom to grieve, as many people had told him he mustn’t cry, and it was time to ‘get out of the mourning’. That freed him, which was a real blessing, and the hug he gave me was worth the cost of the ticket here….

We prayed for a good many more with emotional/personal issues, including a lovely lady, Adrianna, whose daughter had died (aged 6, if remember, with cancer) but to whom God had given a lovely adopted daughter. Mum was afraid she was ‘over-protective’ of Manuela because of her fears of anything happening to her: God totally liberated her, she felt freedom from fear rise up in her almost from her toes, and out through the top of her head. It was lovely to watch as the perfect love of God drove out all fear….

Amazing, amazing God: so far, it seems that we’re seeing pretty much 100% of all the people we pray for healed, set free, recommit their lives. That was Jesus’ ‘record’ – it’s long been my goal since 600+ were healed in a meeting in India over 20 years ago – EVERYONE who’d responded for prayer – and my goal because Jesus said that I – little ol’ cockney plonker, me – can do what he did, and greater things than He did because He’s back with his dad….so truly, while I’m blown away on a human level, I also expect it, as it’s a promise from God, and ALL THE PROMISES OF GOD ARE YES AND AMEN BECAUSE OF JESUS….. (2 Cor 1:20 if you don’t believe me, or doubt th 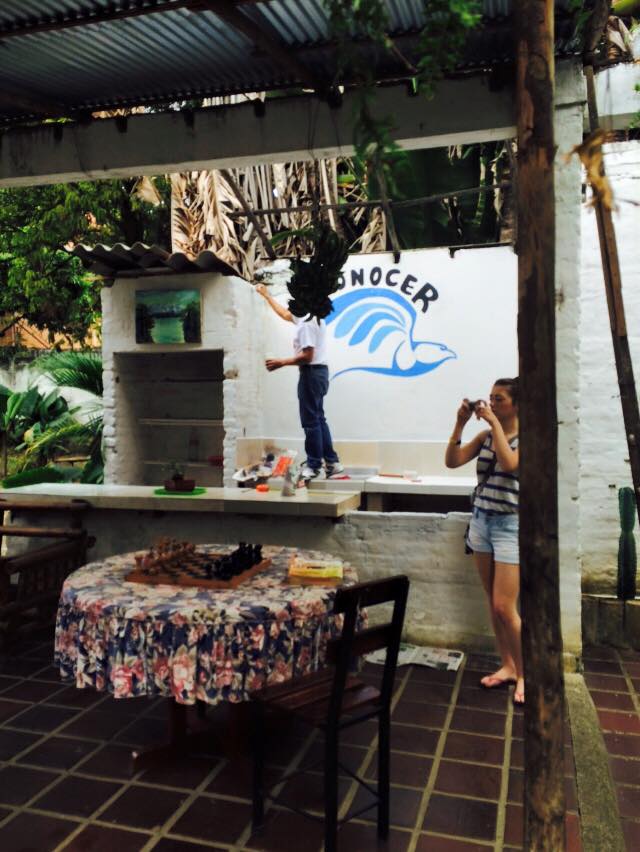 « Emotionally shredded, and mightily blessed
Motorbike killers in a dangerous barrio (district) hear the Good News and get healed…tonight! »