Last night (Tuesday), it was a night of wonderful miracles. And a return visit to a church pastored by a good friend, Jefferson Herrera. I haven’t been to this church for 2½ years, and, as I mentioned in a Facebook post earlier, that meeting was where I met my (now) very good friend, Dario: that night, many, many were healed, including Dario from numerous gunshot wounds and the resulting internal damage they’d done. Dario wasn’t expected to live, and his body was -literally – held in place by a very tight elasticated body stocking. If he were to take it off, his body would have just collapsed… a bear hug after praying for him proved his healing (!), and the friendship stems from Jefferson’s lovely church.

Then, it was a ‘Cuadrangular’ church (Four Square – think Jack Hayford, or Google it!!). It’s now in  new location, and an independent charismatic church called ‘Hoy es Tiempo’ (Now is the time). Why can’t we call our churches great names like these? ‘Dios con Nosotros’ (God with Us); ‘Vision y Avivamiento’ (Vision and Revival); ‘Antorchas de Fuego’ (Torches of Fire)….maybe it has something to do with the reason why God does more here than back home, as the church names inspire faith. ‘Such and Such Baptist/Methodist/Presbyterian’ doesn’t have quite the same…effect? Agreed? Or not?

The worship was lovely, then Kerry shared really well – she’s been absolutely brilliant here, bearing in mind this is her longest ever away from home (she’s 18 years old), and only ever stood at the front of a meeting once before she came here. She’s taken to it like a natural, and really has got hold of praying with faith, commanding what God’s given us the mandate to command, with not too many words, either! Short prayers are all that’s necessary, if you look at how Jesus dealt with sickness and disease. I heard recently a brilliant comment from Bill Johnson (I think): ‘For us to beg God to heal someone is to assume that we have more mercy than he does’. Hmmm. Peter did a great job, too, both of them raising the ‘faith stakes’ telling of miracles they’ve seen God do here in these last 2 weeks.

Caroline, as always, preached really well – another who, until coming here last year with me, had had very little exposure in public speaking in church. That she’s a teacher, and used to being in front of a class, helps: but to confidently (and mostly without reference to notes – that applies to all three of my team) stand in a church and bring a word from God is a whole different ball game. I’ll add a blog tomorrow with the stories from the others, as I doubt they’d appreciate me waking them at 0247 am to ask them!

Yours truly tied up the end, with some encouragement on who we are in Christ, and some stories of miracles here in this ‘open heaven’ city. All through the meeting, I’d been aware of a middle-aged man in a wheelchair, and hoped he’d be first up for prayer. He was. Many years ago, being totally honest here, if there was someone in a wheelchair, I’d leave them until last, for a number of reasons:

I like to see them first now, as, when someone in a wheelchair GETS OUT of their wheelchair, it raises faith exponentially. Leonardo, 45 years old, is a lovely man. Four years ago, he was struck down by Ataxia (a neurological sign consisting of lack of voluntary coordination of muscle movements that includes gait abnormality. Ataxia is a non-specific clinical manifestation implying dysfunction of the parts of the nervous system that coordinate movement, such as the cerebellum – thank you, Wikipedia!), in his wheelchair for those 4 years, unable to stand, and with total 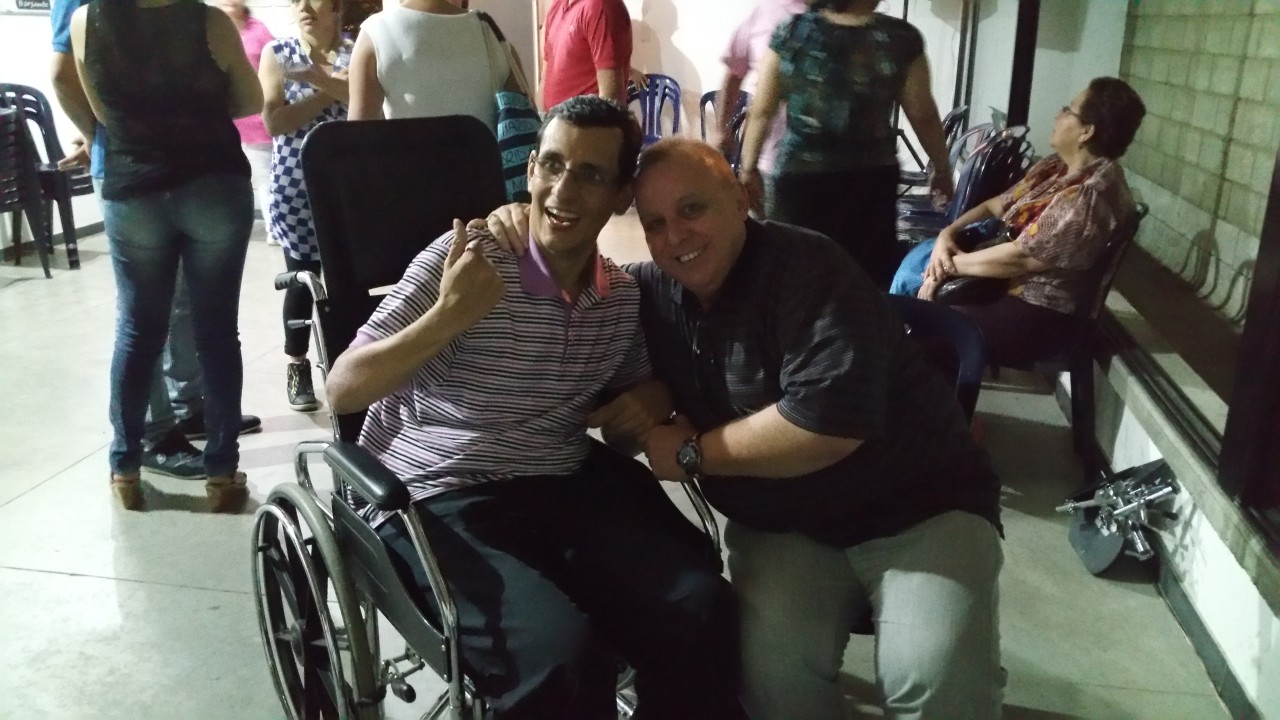 loss of voice function. Remarkably, despite what the disease had done to his brain, he still understood English, as well of course as his native Spanish, so it was easy to speak to him, but only his sister – Jefferson’s wife – could understand his badly formed whispers. 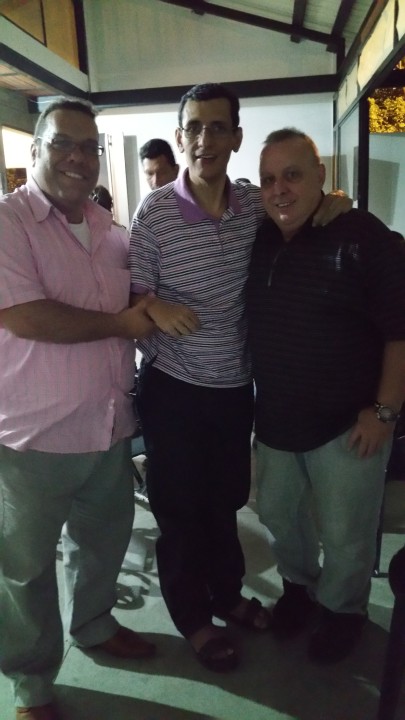 Leonardo, on his feet under his own ‘steam’ for the first time in four years

Well….. within a few minutes, it was like someone turning the volume knob on an amplifier up! His voice got stronger, his words better formed. He said he felt a lot of heat in his legs, and strength flowing down through his body. Of his own volition, he moved his previously weak hands (boy, was his grip strong on my hands by now!) to the front of his chair, and began to pull himself forwards and upwards. We hurriedly moved the foot plates, applied the brakes, and Leonardo slowly got out of his chair, under his own steam (with Wilmar and Jefferson just putting their arms there for him to support himself…

I think one of the things I hate most is seeing people PULLED out of wheelchairs, and then pushed and pulled all over the floor.

Leonardo did it himself. He stood, just with minimal support, for some minutes, then sat again. It takes time, of course, for things like 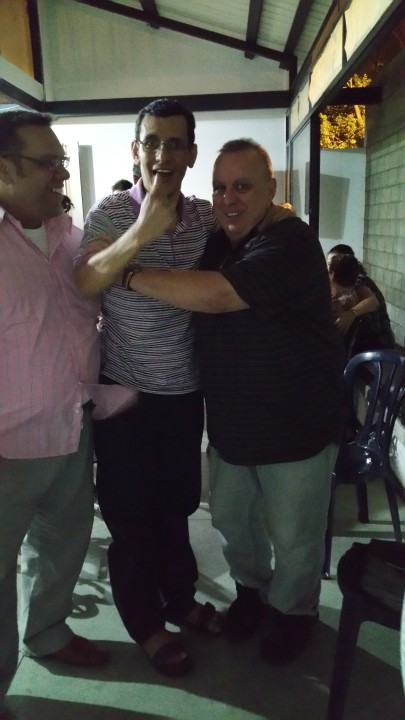 Leonardo, up and wanting to run…punching the air in triumph 🙂

inner ear balance, muscle tone, etc., to change: but a few moments later, he was up again, this time much faster, speaking reasonably clearly (!!) and with a huge grin on his face. Then he began to bend his legs as if to walk…. he turned, but didn’t – last night at least – run and leap out of the church. But it certainly raised the faith level in the church (spontaneous applause for dear Leonardo, and, of course, dear God!), and his dad, mum, sister, brother in law (Jefferson) were everything from over the moon to in tears to utterly gobsmacked…

Leonardo’s dad, Umberto, was healed of extreme pain all down his right side – early arthritis, exacerbated by the constant lifting and moving of Leonardo – and was in tears. Mum, Luz Dary, was released from much anxiety, sadness, depression – all understandable. She’s an intercessor, and had struggled with not seeing answers to her prayers for her son, and his wife. She was all smiles as we left.

Married couple Carlos and Marcella were both transformed: Marcella had a pretty serious ‘ladies problem’ which had had a big effect on their marriage – along with constant urinary tract infections. Both were noticeably changed. Issabella was healed of a lot of pain. Another lady -name forgotten already, I’m sorry – had cancer in her breast and liver. What a change came over her. Her private ‘investigation’ when she got home would tell her what God had done – she was filled with supernatural heat as Caro, Wilmar, and I prayed….

Thank you, Lord. Thank you. Oh what a night…

« DAY OFF – BUT STILL BUSY!!
Night of wonders – video of Leonard getting out of his wheelchair…. »