I’d have to confess that I think to wake and get up at 0500 on a Sunday for church is rather outside outside my bounds of delight! But – it was to go to Tulua (pronounced Two-lwah), a city I’ve come to love going to, made many friends among pastors, leaders, and members of some great churches, and seen God do some amazing things. There have been many healings and miracles there over the last few years of tripping north towards Bogota for a couple of hours (Bogota is 8 hours north). Church was at 0900: the hospitality of Iglesia Manantial de Amor (Springs of Love), was outstanding – coffee immediately we arrived, cooked breakfast about 30 minutes later: the care they took of us was exemplary. Really lovely lunch after the service, too…. 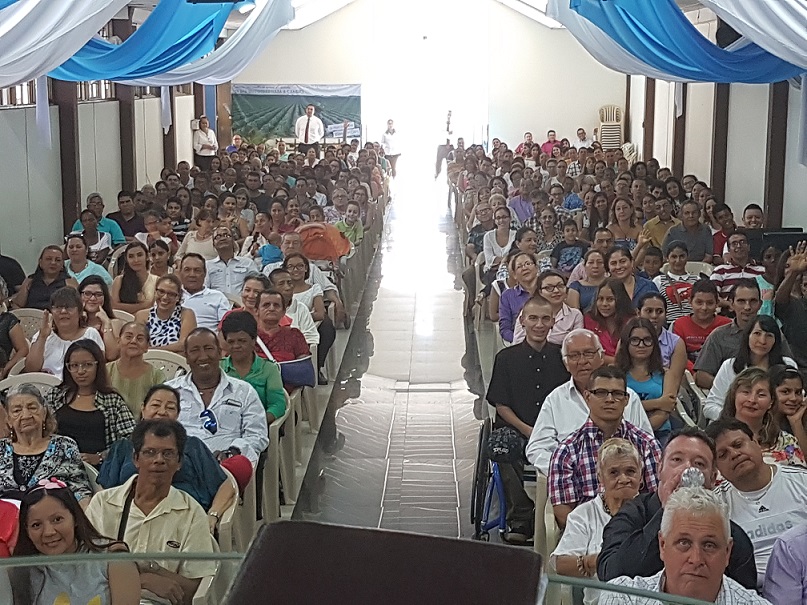 Again, all the guys spoke – a bit nerve wracking maybe in front of a good few hunded people. Adrian spoke well about the determination to get to Jesus for healing – many walking miles, waiting hours, but all were healed. Interesting that when you read the account in Matthew 15:29ff, Jesus saw the crowd for healing, and SAT DOWN. Those who know me, and know my ‘style’ will know that I’ve always sat down to pray with people, individually. To me, I don’t care how long it takes. I don’t see anywhere where Jesus got them to stand in a line, walked along the line, shouted at them to be healed and pushed them over…. yes, I know, not everyone’s pushed, but there’s a psychology about being among the ones who DON’T fall over, and many go over under ‘peer’ pressure. Personally, I’d prefer to stop people falling over, so you can ask them, ‘So what are you feeling?’, ‘Has the pain gone?’, ‘Any unusual sensations?’, ‘Do you know that you’re healed?’….

Adrian was very visual on Sunday! Picked on one poor Usher, and jumped on his back (Adrian’s a big bloke!), and had the man carry him up the quite steep stairs to the lectern (I had a wee bit of trouble walking up them with my ailment!!) – demonstrating that people were carried to Jesus. I’ve seen many carried to meetings, when in the wets, they’d have stayed home…. then he reversed the roles, and carried the no doubt terrified Usher (quite a big bloke!) DOWN the stairs the other side of the platform! Point made, though – desperation, expectation, belief + Jesus = healing. 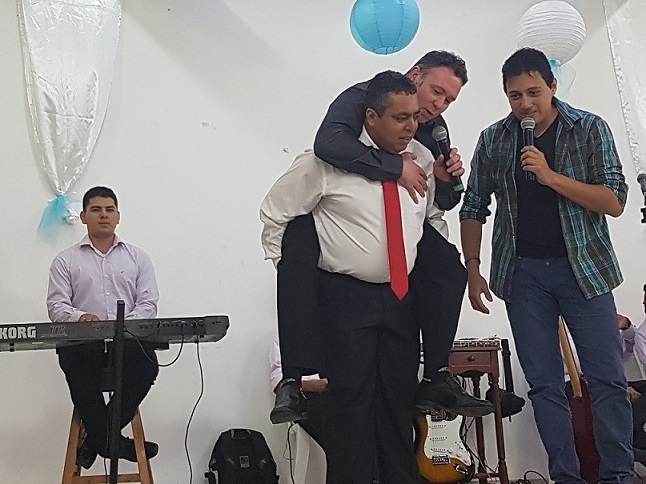 Adrian practising newpreachng techniques in Tulua last Sunday – I think he was trying to take everyone for a ride, including himself!

I wonder, do you think Wesley or Wigglesworth or Spurgeon gave people piggy backs? 🙂 One of the myriad things I love about Colombia, and Cali, Tulua, and the state they are in, is the expectation, and the huge profile that they give to healing and miracles – almost the reverse in many western churches – primarily, I guess, ‘in case it doesn’t work’ (what a load of….erm…basura (rubbish!) – or the belief that the enemy is clever in inventing new diseases, that cancer is something you pray for in hope rather than expectation (see the last blog and the story of Astrid! – and read back over years of blogs if you want to see hundreds, maybe thousands, healed of it). I get so angry when I hear prayers for healing that include ‘Lord, if it’s your will’. We KNOW the will of God for healing: Psalm 103: 1-5 is God’s social security system (‘forget not all his benefits’) – who HEALS ALL OF YOUR SICKNESS AND DISEASE. We know the will of Jesus for us for healing – ‘I’ll send my Holy Spirit… (then Paul:) and you’ll speak in new tongues….through to gifts of healings (plural) and miracles (plural) and back to Jesus: you WILL lay your hands on the sick and they WILL get well….. ‘This is the Kingdom – heal the sick, cleanse the lepers, cast out demons, raise the dead: freely you’ve received, freely give’ – Jesus again, Matt 10: 7-8. There’s another of my ‘bugbears’ – charging for ministry. I wonder how much Jesus charged? And how charging its into ‘freely receive, FREELY give…’? Rant over!!

The place was packed – or bunged if you’re reading this in Northern Ireland! Again, people saved – including a young brother and sister, Harold 17 and Angie 20, both having their bodies slowly closed down and destroyed by Muscular Dystrophy. Harold has had a bad time with suicidal and murderous thoughts (those do tend to take on reality here). Thanney led them hrough a prayer of forgiveness, and then commitment to Jesus. I prayed for all sorts of things for them, Peace came over Harold, and Angie felt tingling and heat in her legs, legs which she’d couldn’t feel a few moments earlier…. A lovely young lady, Claudia, paralysed totally for some months, brought to church because  – I know – that her family KNEW she’d be healed> That’s one of the significant differences between here nd the western world: you’re paralysed, have to be carried around in a plastic garden chair – so you go to church because you EXPECT to be healed. All sorts of things happened to her, changed for her – pins and needles in her legs, more heat, a smile so broad it was contagious, peace… She stood for the first time in a long time, yes- with support from family, but it’s the determination AFTER the expectation that God adds even more power to. I really sensed she’d walk again, very soon.

Exhuasting, though, with the early start, the drive, preaching, praying for ages, and then the drive home….but worth every second of tiredness. 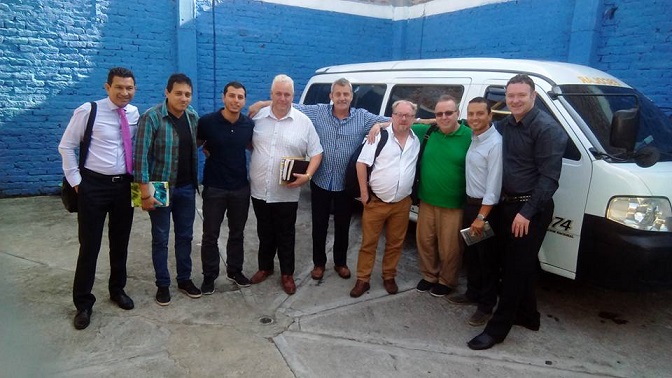 the lovely guys from Manantial de Amor, who certainly did shower us with springs of love!

« Masses of healings! – Street….church…. Astrid’s 7th anniversary of ‘cancer freedom’ after being heald 6 times from the disease
Acceleration time of God’s outpouring….as the end is getting near :( »