Monday, not a usual day for a meeting in many countries, took us to the dangerous barrio of Los Lagos, in the heart of Agua Blanca, in the east of the city, about 25% of it’s area, but about 40% of the city’s population. Los Lagos (The Lakes) is as tough an area as you’ll find: the sort of place where no one stops at red traffic lights because it’s an invitation to robbery, certainly don’t have your windows down, and where even people who live there are loathe to show that they have a mobile phone. Even taxi drivers will  tell you to put your phone away, whether it can be seen from outside or not…. but I love it there, regularly at the church Oasis de Restauracion.

The journey there was riotous, as 6 of us piled into Wilmar’s car (a 5 seater, needless to say!), and apart from ilmar, not a ‘small boy’ among us….! Somehow, Davy ended up on top, ‘crowd surfing’ Thanney, Andrew, and Adrian in the back…. there ARE one or two benefits of having bad knees, I realised Monday night was one of them!! There was one  moment when Davy appeared to be about to ‘moon’ out of the rear side window: fortunately, he didn’t, as he might have had his rear end stolen!! 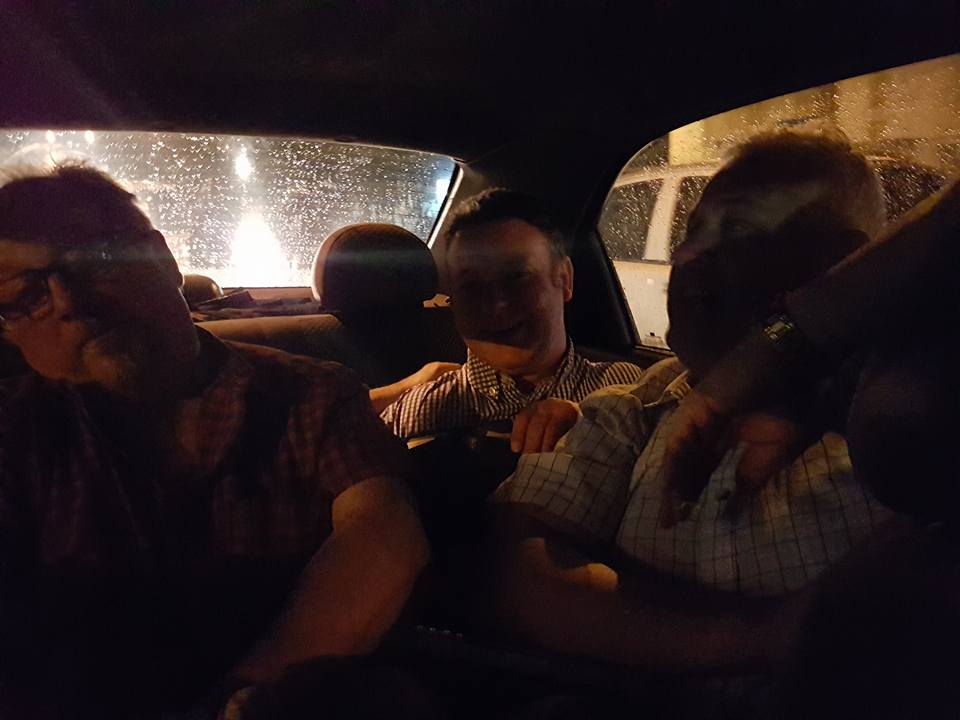 For the long drive to Los Lagos Monday, four Irishmen tried to set the record for the the most (non-small) people in the back of Wilma’s car – with wee Davy King body surfing across all of them….

Wilson and Luz Eneth Monroy have been friends for some years now, and it’s always a joy to see God move in and bring salvation and healing. Last year, I had the pleasure of praying for their son Samuel. I’d remembered praying for him, but on Monday, Wilson reminded what happened. Samuel is a footballer, but had suffered all his life with a ‘lazy eye’  not ideal if you’re footballer. Samuel’s eye was perfectly straight in the morning, and has been ever since. Thank you Lord! Monday, Samuel asked for prayer for a fairly serious ankle problem, and flat feet – again, not ideal for a footballer! Flat feet I know about, as my knees have changed the shape of my legs and the way I walk, and I have flat feet now…. Well, Thanney and I prayed for him: the pain went instantly, and got him to take his trainers and socks off. All three of us watched as the arches began to form in both feet, and Samuel walked normally again….WATCHING a miracle is something else…. I’ve seen arches formed a few times now, but it’s always as exciting….

More osteoarthritic knees were healed – thank you, God!! – spinal trauma and pain, and soooo much more…. All the guys reported that virtually everyone prayed for had been healed. Wilson and Luz Eneth had put on a meal for us afterwards, which was great, and we got to pray for Wilson, suffering with various things from back pain to sleeplessness, and – yes, of course, severe pain in his knees….. all the pain went – hallelujah!! – and his message to me the next morning was that he’d had a good night, and felt well…. it’s so worthwhile praying for people here…. Lots of people healed, then – on a Monday evening! Miracle!!

« Where the Spirit of the Lord is….. there is everything you need! (Just add expectation and desperation….)
Friends are friends forever – or are they? »