I’ve been coming to Colombia now for not far short of 20 years: this is my 74th visit here in that time, mostly with a team, even if that team has only been one person. Having not wanted to ever COME here when first invited – its history, ‘threat’, violence, kidnapping, shooting – all piled into my mind in a split second when I was asked, I was already formulating my ‘reasons’ for not being able to come to this north west corner of South America.

Trouble is, I’ve found God to be pretty ‘persuasive’ where my arguments against anywhere I didn’t want to go are concerned…. so I came, armed with the now-famous sticker on my suitcase, acting as a prophetic word from God for me (!)- ‘FAT PEOPLE ARE HARDER TO KIDNAP’. I am SO glad that God doesn’t listen to my arguments and reasons! (Africa and India had been part of my original ‘I’ll never go there’ manifesto way back in 1987, as, coming form a family where cutlery and crockery were wiped with wet wipes by mum before we went to anyone else’s house for even a cup of tea, they didn’t fall into that ‘immaculately clean’ parameter! Colombia was different again, as, having got way past cutlery, crockery, and sitting on anyone else’s toilet seat but our own at home, death and kidnap by guerillas took on a more sinister twist than a mildly bacteria-d loo seat!

I fell in love with Africa and India within 24 hours of arriving in both. AND with Colombia. Not long into my initial forays into this wonderful country (mostly on the north coast in the wonderful city of Cartagena), Cali came calling. Fingernails were bitten to the quick again – actually, fingers, too – almost to the knuckles! – but I said yes. I remember boarding the plane in Cartagena, via Bogota, to Cali, with fear – even terror – clawing at my mind.

WHY OH WHY do we worry, when God calls us? One thing I’ve learned in my little life is that I ain’t going anywhere eternal until God says I am: I think meeting Chinese Christians (in China) in 1987 and for a while after, had told my mind that, now I was needing my spirit to get into line with that truth. My first major contact in Cali – and a couple with whom I stayed – Hein and Teija Hoere, were from Holland and Finland. Thank you Lord!! Then it was to stay with really nice Colombians – in a nice house….. then, it was to taking short-term rental apartments in order to be together as a team, and potentially save hours picking up and dropping off the team due to the mad, manic, intense traffic in this city….by now, fear had gone.

Hein and Teija are STILL dear, dear friends. We (my team and me) were with them for lunch today. (Almot) 20 years or really lovely friendship, which sneaks into Northern Ireland at least once a year when they visit to preach…. Soon, a young man – about 23 years old (I’m old enough to be his dad!) became a Christian: Wilmar Gomez truly has become much more thn a friend – like the Hoeres, Wilmar is a brother in the Kingdom, the bond (for me at least) so strong, it’s unbreakable. With his wonderful love for God, his wonderful family – adorable wife Marlene, and ‘raring-to-go’ missionary daughters, Sophia (16) and Sarah (15), Wilmar embodies for me what Michael W. Smith wrote about 35 years or so ago in his song ‘Friends’. Forever. It’s not that Hein, Teija, other wonderful (and I believe, lifelong friends here), and Wilmar and Marlene keep telling me I’m a friend: they LIVE as friends with me, this strange, odd, quirky, balding, still overweight, short Brit, who brings a motley assortment of people here…. I don’t think I’ve made TOO many mistakes in selecting who to bring with me – but of those who I have brought here who I’d ‘picked’ because – I thought – they were friends forever, some have turned out to be positively the opposite…. 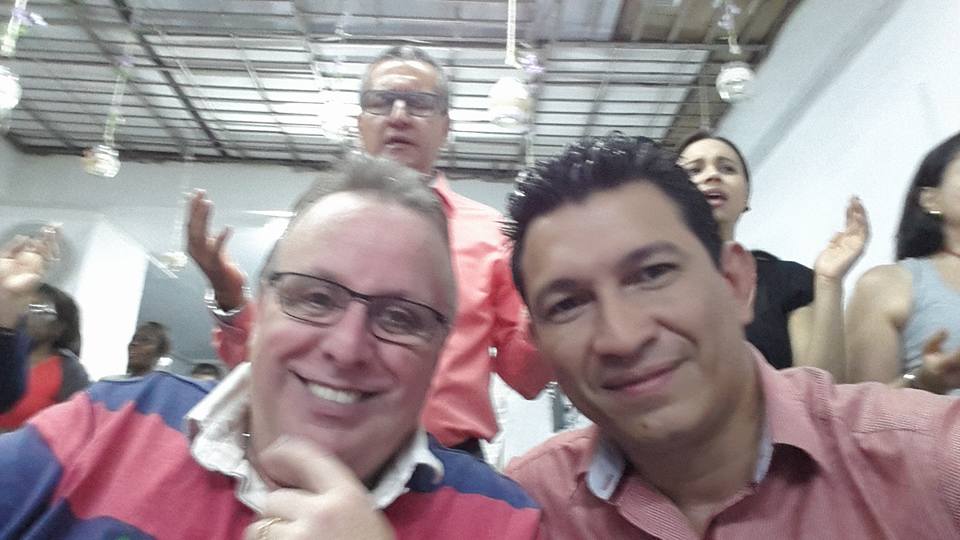 One of my ‘principles’ of ministry – especially when it comes to teams – is to open doors for people to do things that they might not get the chance (or DON’T get the chance!) to do back home where they’re from. And another ‘principle’ is to see people released into Kingdom ministry, like healings, miracles, and evangelism. so that there are more and more people doing (thank you, the late John Wimber!) ‘the stuff’.

I’ve been in full time ministry (what does that really mean? We should all – if we love God and are called according to his purpose – be in full time minitry, surely?) for 39 years in January. Often, I think full time ministry often means doing the stuff, but just not earning anything doing it! Just occasionally, I remember on the 18th of an odd month here or there, when life is tough financially, thatI’d have been getting paid if I still worked in the bank I used to work for. In ministry, God’s calling is often – more often than not – to be WAY WAY WAY outside our comfort zones, trusting him for everything – which normally means through his people – and allowing him to open doors for us, or allowing us to follow through doors opened for us, by other people.

When God said I’d be up, up, and away, around the world, praying for the sick, preaching the gospel, and speaking on ‘Goals Dreams and Visions’ (a title of some teaching given to me by the lovely people in YWAM Ghana – Faithful, Mary, Nick, Grace, John, David, Nii, Betty….and soooo many more), it was FUNNY. From wet wipes in England, to the ‘grim sweepers’ – the students whose job it was to sweep the sand on the YWAM complex in Tema, Ghana – at about 4.30 am(!! joy oh joy!!), from a family with many illnesses to praying for, and teaching others about believing for, the ick to be healed. Friends I’d never known suddenly became good friends. With no hidden agendas.

It wasn’t too long before some people I took with me, some to many places – Romania, to Africa, to the USA, to Colombia, to France – wanted not a ministry of their own, but wanted MINE…. and began to try and undermine me with the people I was taking them to. Trouble is, they’d underestimated the depth of friendship that is established with people in other countries, who told me. I’ve had people – for years and years and years (one for over 14 years) – tell me, and tell churches publicly – Paul’s the best friend I’ve ever had. And then (to use the only word I can think of that fits here), totally shaft me, after I’d opened doors, given platforms to them – so that they could do – especially in this ‘open heaven’ environment in Cali – things that Jesus did, and who told me ‘my life’s been changed forever’… (life = about 3 days!).

I don’t know about you, but I WANT friends who stick closer than a brother – the Jonathan to David story. I WANT to BE a friend who does – and is – that for other people. My friends list (no, not Facebook!!) includes – now – some surprise people. It also excludes other people I once thought were friends forever….. Surely, as Christians, with our Lord and our brother, Jesus, as our example, we SHOULD be closer than brothers (and sisters) to each other?

I want to be a friend who will stand in front of my friends when the ….stuff?! – hits the fan: stand by my friends when all hell breaks loose for them, sit with them, cry with them, hold them, and bring them back to ‘life’. Who, when false accusations, set up by the enemy to discredit, bring disrepute, are thrown at them, go to them and love them, ask what happened, and then stand by them. I want those friends for myself, too…. that’s where Wilmar – and others – come back into the frame: a man whose love and friendship is unchanging, and with whom our mutual friendship and love grows and grows and grows…..

« Acceleration time of God’s outpouring….as the end is getting near :(
God’s promises have no expiry date…. »