Well….my gob was about to be smacked (for non-English readers, that means I was about to be taken by surprise, big time!)  on Wednesday… following the amazing time on Sunday at La Noces de L’Agneau, it got better still in terms of God turning up, at a meeting in Nantes. Quite a few of the people who were at the Sunday meeting were there, plus about another 150 – some had driven for 4 hours (each way!) to get there. It began at 8.30 pm, 2030 hrs, though we were invited to eat at the home of the lovely Philip and Cristiane  at 5.45 (1745) – who had the vision for this gathering, I believe.

The meeting was beautiful – great worship, great praying – with a real passion: I was so blessed and privileged to be there. Colin’s told me that I’m probably the first Protestant to speak at this, and Ls Noces de L’Agneau, which in itself is a real privilege, and shows that there’s a real coming together in unity, to worship Jesus, and that the acceptance of each other’s differences in ‘theology’ is genuine – and, in truth, irrelevant… It was so easy to preach: the presence of God made it flow, I could have gone on for hours! That might not have blessed the people there, though, and certainly not my lovely translator friend, Jean-Philippe Rouillier…. 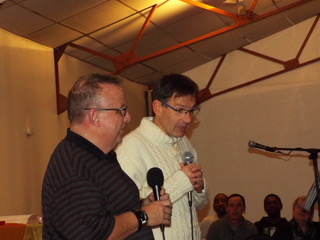 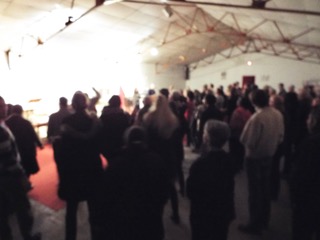 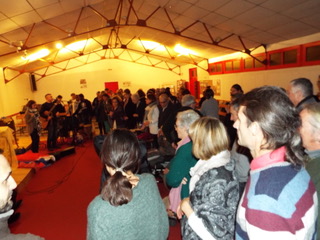 Lots of healings and miracles – knees of course, with lots of osteoarthritis going, but ‘unuual things’ – I posted a picture of  young lady with a broken leg in the last blog. She rushed up to me Wednesday, to tell me the news…. She came for prayer Sunday, and was at Wednesday’s meeting dancing…. what made that remarkable was that on Sunday, of course, she had had a broken right leg, a steel plate in her groin (I think further examination/xrays will show that it’s gone), and lots of other pain related to back issues. Her broken leg was healed, and she’d been to the hospital to get xrays of the to prove it…. 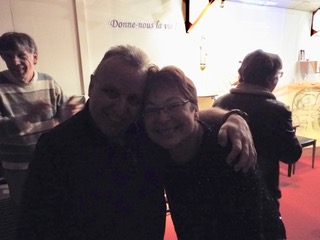 Another lady, with acute osteoarthritis, especially in her knees, was totally healed – she, too, was dancing, when 72 hours earlier, she couldn’t walk… she was walking perfectly Wednesday, AND dancing in the worship…. 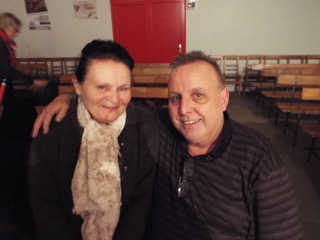 This lady couldn’t walk on Sunday – osteoarthritis – on Wednesday, she told me – no pain, no discomfort – and was dancing…

The lovely man who had been deaf, came to give me a huge hug, as did his wife…. I got my fill of hugging (for a day or so at least!) – how amazing of God to give hearing abck after many years without it, and very expensive hearing aids – Thank you, Lord, that for you nothing is impossible, and that because of Jesus, nothing is impossible for us, too (Matthew 17 if you don’t believe it!). 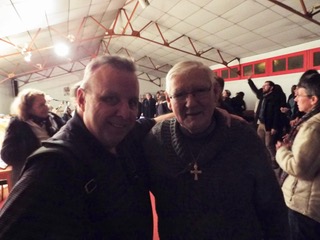 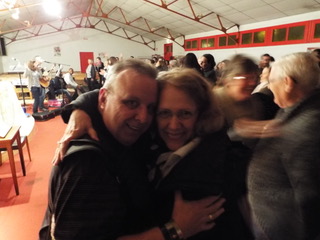 The lovely wife of the ex-deaf man!

The praying went on a long time, and again we were the last to leave – past 11.30 (2330), and Sue, Colin, and I  were truly – but wonderfully – exhausted by the time we got home. It was a tiredness borne of giving away freely what God has blessed us ALL with – the Kingdom of Heaven, healing the sick, cleansing the lepers, casting our demons, raising the dead. When Jesus added ‘Freely you’ve received, freely give’, it wasn’t an after-thought, it was as true as what he’d said before. And the fact that you’re totally shattered at the end of a minsitry time – be it preaching, praying, or whatever, means that you’ve given away what you’ve been given. God recharges you pretty quickly though, which is  blessing!!

Yesterday was a more relaxed, but we went to the home of a family with a whole raft of ‘issues’ – daughter (15, Magale) with pretty severe scoliosis: we saw her xrays, her spine at least 15º-20º in one direction, and probably 25º in another direction….left leg, as a result, 12-13 mm shorter than the the right, so causing walking with a considerable limp…. Magale had just started kick-boxing classes, but had to stop bcause of the pain. Well, God did what only God can do, and I suggested getting her back xrayed as soon as possible. Checked out the length of her legs: about 1 mm different, and, of course, that ‘went’ n just seconds. The change in her face and demeanour was fantastic. It was a ‘chalk and cheese’ difference….

Her mum had experienced an awful family life as a child: a lot of abuse from within the family, then dad committing suicide. She spent some time in psychiatric care, and diagnosed by some psychiatrists as having a major persinality disorder, and by others as having nothing wrong. That’s an awful confusion to be in, and it had had a knock on effect in the family…. well, God set her free yesterday, and, again, the change in her a lovely to see!

An incredibe few days….loads more besides what I’ve reported here, but this blog is long enough already!!

« Noces de L’Agneau – Christ-Roi….The Wedding Feast of the Lamb – Christ the King
The joy – and the struggle – of the Vendee »