For my lovely friends Colin and Sue, my wonderful ‘hosts’ here in this lovely part of France, there are many joys at being here. Some would be obvious – the summer climate, the beaches (not that they get to the beach to relax), the beautiful towns and villages, the relationships that they have worked hard to build and establish with the locals. I’ve seen that first hand, having been here the best part of two weeks now: I’ve had the pleasure and joy of meeting their friends, who have grown to love and trust them. Last night, we were at the home of a neighbour, Pauline, with two lovely daughters, Rose 13, and Celeste 10, for Celeste’s 10th birthday party. Eight years ago, Pauline’s husband committed suicide: why – I wouldn’t know, as she’s a lovely, bright, vivacious lady with two lovely daughters. Soon after that, Pauline’s mum died. What has developed for Colin and Sue, who have been alongside the family since before and after that tragedy, is that they are accepted as part of Pauline’s family, and have become ‘surrogate’ grandparents to the girls, who clearly love them to bits, as does Pauline.

That’s one story, of many, many stories. A few days ago I put a post on Facebook (I’ll re-post it at the end of this blog) about a dear, sweet man, Jean Claude: he was wonderfully healed last weekend of strong, long-term tinnitus (debilitating ringing in the ears). Jean Claude is a single man, who has been through a really tough time – and a pretty hard life, by all accounts – and he is a Catholic , he’s not a man who has many friends, being quite shy and withdrawn – yet he turns up at Colin and Sue’s house, often unannounced, knowing full well that he’s loved and accepted here. The other day, he was so excited at being healed, that he came to tell them – and me – and stayed quite a while….

So MUCH of mission work is relationships. It’s building friendships, not force-feeding evangellyism (cos it’s often pretty wobbly and unstable!) down the throats of people to get them ‘saved’ – and, in my experience, building relationships and bridges is far more effective… the trouble is, in a beautiful place like this, is that a lot of Brits come to live (I’m told that there are in excess of 6,000 ex-pats living here) and many of them just forge litle communities/churches that are British….what is so lovely about what Colin and Sue are doing is seeing change come in the lives of non-Christians, in the lives of nominal Catholics, and real unity come with spirit filled Catholics. Because they know their call here was from God, to be missionaries, Colin & Sue often find themselves the only ones really reaching into the local community, and not going to the ‘get togethers’ of the ex-pats. While it’s a wonderful part of the world to live, it’s well konown in the ‘mission community’ of like-minded people that France is quite a tough place to work, and so it’s often very lonely.

My very long-time mate Tim Herbert, hinself a former ‘residential’ missionary, in Mozambique and Zambia, knows the problems of being called by God, and even ‘sent’ by a church, to another part of the world, and the huge difficulties that confront missionaries while they’re away, and often the massive struggle, once having been sent, of being ‘forgotten’. With that knowledge, he established a ministry – ‘Syzygy’ (http://www.syzygy.org.uk/), to support isolated missionaries abroad, and to assist with their ‘re-entry’ when returning home. Colin and Sue aren’t – geographically – a long way away from home: but in terms of lifestyle, faith, support, and care, it’s light years away from snug, ‘over-churched’ United Kingdom. I’ve gleaned from them that, apart from a few visits from people coming to speak at their annual conference, ‘Louange Côte Ouest’ each May for maybe a week, they don’t see anyone from the UK, apart from now, with little old me, and some folk who came for a holiday to look after their house and cats, while they went back to England for their their son’s wedding in August…..

Many years ago, prophetic words to the church I was then an elder of, that it was to be a ‘mission church’ (rather than parochial), meant that I was ‘sent’ (as the prophecies all were directed not just at the chuch, but at me). It wasn’t long before the ‘sending’ was forgotten: and not too long before I moved on from that church. I’ve never felt ‘sent’ – or supported by the church, though individuals in those churches have and do support me), that I’ve been part of since…. it’s an incredibly lonely place to be, and though I have a group of men that I go to for input, advice, a smack round the head when I need it (!), and – most importantly – love and care – it’d be wonderful to feel that ‘church’ is behind me. I’ve taken others from those churches with me over the years, and they’ve returned ‘on fire’, with their faith raised, experiences under their belts that they’d never had before, a perspective on what God is doing in another country and culture (and, in Colombia’s case, the opportunity to minister under that ‘open heaven’) – which surely can only benefit the church as a whole…?

That’s tough, believe me. I’m rarely away for more than a few weeks, and, if I’ve not taken a team, it’s very easy to get lonely and miss everything that was familiar. What’s lovely about Colin and Sue is that this is very much ‘home’, even despite what I’ve just written, and their home certainly is ‘home’. They don’t ‘pine’ for the UK, but would love to know the support and care of people back in the old homeland…. visits to missionaries are essential: not optional. Support for them is essential: not optional. A few years ago, there was a massive storm here – hurricane force – 52 people died, hundreds and hundreds of homes destroyed. I think Col said that they didn’t have one phone call asking if they were ok… I’ve been here a few times now: and – if they’ll have me (!!) I’m dedicated to come again – often, to help them, yes, but even more, to just be with them. Read Sysygy’s website about looking after missionaries: it’s an eye-opener. And as well as getting behind Colin and Sue, get behind Tim and his ministry through Sysygy. YOU’LL benefit: not just just them….

Bring a team – to help at the conference, if not at other times – they work themselves into the ground at LCO, and need people to share the burden of it – setting up, running the coffee bar/shop, knocking it all down….you’ll be blessed, they’ll be blessed, and you’ll see the lovely Vendee, and just how hard the ground is spiritually….

This lovely man (the one on the right!!), is Jean-Claude, who was at all the meetings I spoke at in Brem-sur-Mer last Saturday. He’s suffered with tinnitus for many years, and was healed. He’s just come round to Colin & Susan‘s house just now, because he’s so excited he wanted to tell me personally. If you’ve had tinnitus, you’ll know what a blessing it is to have silence in your head. The enemy’s tried to dump it in my head in the past year, but I’ve refused to receive it and it’s gone for good now!

That’s lovely for me, as it’s pretty rare that someone puts themself out to do that specially. Thank you, Lord, for healing this lovely man.

Loads more to his story, but that’s unique enough!! 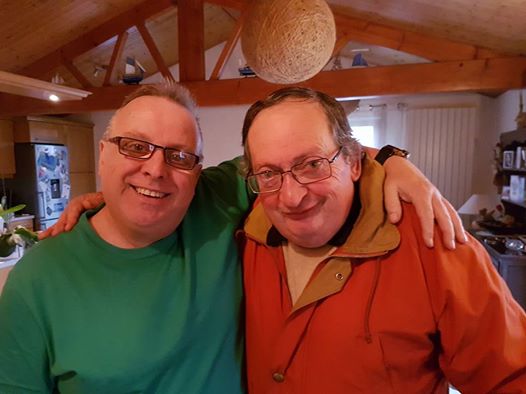 « Heaven opened…
The Presence of God in Normandy »