No, Sprog isn’t an acronym…. this is a follow on from yesterday’s post, and highlights the tragedy of life in poverty-stricken countries. One day, in Mozambique, a young dad turned up carrying his four-day-old son. His wife had died giving birth to the baby, and dad knew that the only hope was to get the baby to Maforga Christian Mission, where my friend Tim worked, and where I was based while I was in Mozambique. I know for some of you that these sorts of situations are not unusual when you’ve been missionaries – but dad had no access to – or money for – milk powder for his son, and no water. He also lived a two-day walk from the Mission, so he set off when the baby was two days old to walk there after burying his wife. He walked non-stop for 48 hours: on arrival the nurses did everything they could to save the baby’s life, who miraculously when dad arrived was still alive. I was out – at a meeting I think, in Beira with Tim – and when we got back to the Mission, the little boy was dead.

I heard before I saw anyone from the Mission, and knew that they wanted me to conduct the little boy’s funeral. I just couldn’t, it was too much for me and my daughter, Katy, who was with me on that trip. So before I could be asked, I told Tim to get in the car and drive, and got out of there as quickly as I could…. what an admission to make. I’m not proud of it, believe me. We stayed out for quite some time, before going back ‘home’. They hadn’t buried the little boy, they’d waited until I got back. I felt sick, like I’d been kicked hard in the stomach, and knew I couldn’t ‘escape’ a second time.

It was made worse as dad had dug the little boy’s grave – the boy hadn’t even been named, hence ‘Sprog’ – and his body was in a shoe box, he was so small. Dad had dug the grave quite deep, and neither Tim nor I have the longest arms, so for the last few inches we had to drop the shoe box until it hit the bottom. As we did, the lid came off: I knew that God was giving me the chance to pray for him to be resurrected. I couldn’t. I just couldn’t. What if it didn’t happen? What if he stayed dead? Dad had already lost his wife, and his son, and to have a ‘failed’ resurrection attempt just seemed unbearable. Sprog’s dad filled in the grave, Katy and I were both weeping….I went back to my room and told God what a failure I was, and that I could never pray for the dead again. God argued with me, and – ridiculously – I argued back, until God won….and said ‘Yes you can!’

I’d met ex-dead people in China – that story is pretty well documented and preached by me – and I knew I had to keep praying, when presented with the opportunity, to do what Jesus did, and to keep going until he did it. Sprog would be about 22 years old now. I’m so grateful that God gives us opportunity after opportunity to do what Jesus did, and doesn’t discard or admonish us when we fail, bottle it, run, hide, try to give up…. it was a few more failures after Sprog before the wonderful power of the Holy Spirit did what Jesus had told us that his Spirit would enable us to do….what has been amazing for me is that after every ‘failure’ I found my faith level RISING, not decreasing. God is so, so good, and I’m so grateful to him that this little East Ender from Stratford, London, has seen God’s amazing power when I know that I have none – three times now. Thank you, God, that all your promises are yes and amen in Christ Jesus, if only we’d believe them….. 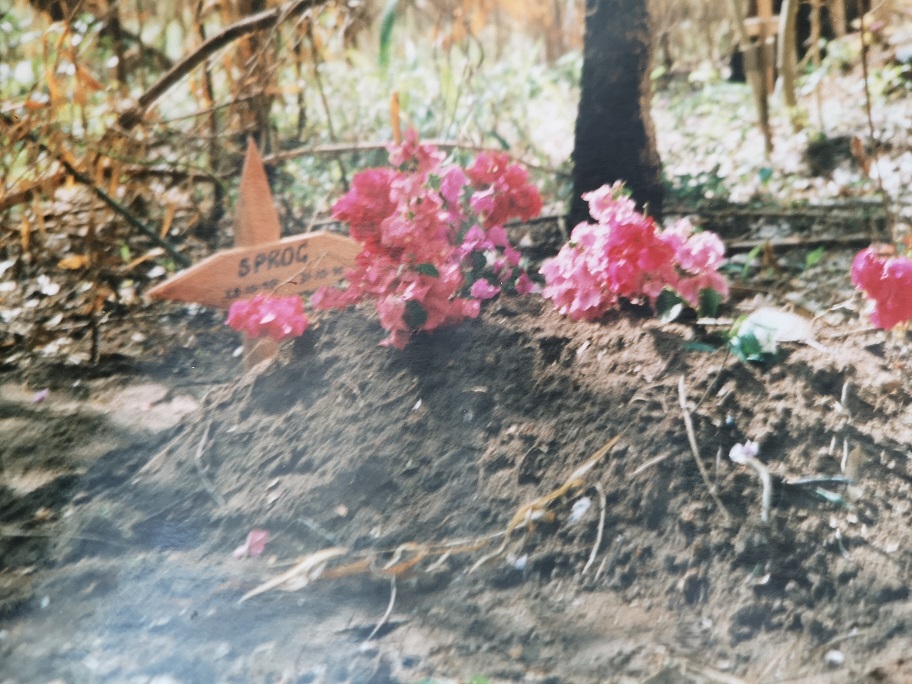 Sprog’s grave in the bush at Maforga, Mozambique

« THOSE MAGNIFICENT MEN IN THEIR FLYING…..MAZDA!
‘What do you mean, ‘What do you say to those who aren’t healed? We don’t understand the question, that situation never arises!’ A miracle in Bolney!! »